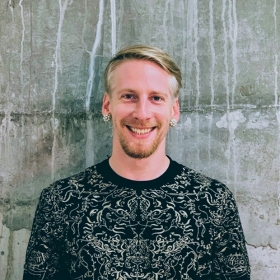 “I woke up determined to reframe the panic,” says the graduate of Concordia’s Human Systems Intervention program.

Payne promptly got to work. On March 12, they set up MTL COVID-19 Mutual Aid Mobilisation d’entraide, a goods and services exchange platform that connects volunteers and other providers with people disadvantaged by the pandemic.

The Facebook group has rapidly grown over the past month and currently has close to 17,000 members. Payne recently spoke about the initiative over the phone.

What does “mutual aid” mean to you?

Griffin Payne: It’s rooted in years of activist organizing. I think one of the fundamental premises of mutual aid is the recognition that systems of power will either not serve us or are doing active harm to communities. And so, we need to self-organize to meet our needs together, to be in solidarity with one another.

You wrote a moving piece about why you decided to start the Facebook group. Can you talk more about what inspired you?

GP: I was lying in bed the night before I started the group and I was in a panicked reflection, realizing that I would likely have no income for the next few months. But I think the big shift for me was recognizing that I would struggle way more if I continued to allow it to be an individual struggle, when actually it’s going to be a very similar situation for a lot of different people.

Even when things are normal, mutual aid networks among queer people and other marginalized communities are how we survive and that’s in large part because social, economic and political systems are not built to serve us. I saw this moment as a huge opportunity to take that kind of wisdom and collaboration and bring it to people experiencing some of this for the first time, knowing that with the scale of the crisis, the government’s response systems would still be inadequate and there would still be gaps.

Can you talk a bit about how you created the group? What was the process like?

I started setting it up having no real plan and having never set up or been an administrator for a Facebook group before. I invited people from my own personal network, my alumni network, and people from another mutual aid Facebook group I’m a part of for queer people who experience chronic disabilities.

As it started to grow, I realized I needed help. I was able to pull together a team of moderators from folks who were involved early on and who I had mutual friends with.

What types of challenges have you faced?

There have been waves of different issues. I’d say in the first week of the group, we had to really deal with where we stood on medical advice. The situation was changing every few hours, even public health experts were in disagreement about certain things.

Also, there were two big issues that were constantly creating debates and arguments in the group. One of them had to do with folks organizing around a rent strike and to protect tenants’ rights. And also, what to do about calling the police? Some folks immediately tend to jump to call the police for different kinds of issues, but we were trying to create awareness in the group that for certain marginalized communities, calling the police can make a dangerous situation even more dangerous.

Is there a moment that has emerged as particularly moving?

There are so many success stories of people getting connected to resources, people who want to help, and are able to find each other and self-organize. One was a single mother who arrived in Canada with her son from Bangladesh just a couple of months ago. She reached out to me after she had made a post and got so much support. She told me that having this group and the kind of response she got has made such a huge difference that she now feels like she’s not alone in Canada.