‘I wanted to see if I could capture this in-between moment we are currently in,’ says the Concordia grad
|
By Ian Harrison, BComm 01
Source: University Advancement 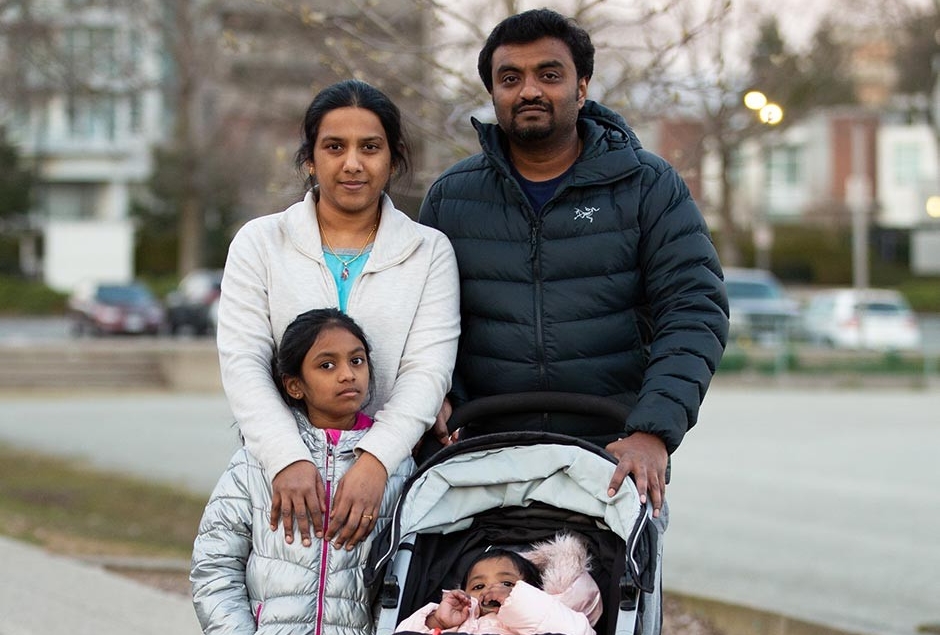 A woman dressed in gray slacks, an ankle-length trenchcoat and white shoes stares at a smartphone, a red backpack at her feet. She holds still for what feels like an eternity while a gentle breeze flutters her hair.

This unexpectedly poignant video clip, posted to Instagram on March 14, was the first in what has become a “Social Distancing” series by internationally acclaimed artist Adad Hannah, MFA 04, PhD 13.

“Yesterday I got frustrated with feeling paralyzed,” commented Hannah on Instagram. “Sitting at home endlessly reading the news — and decided to do the only thing I’m qualified to do and make some art. I wanted to see if I could capture this strange tense in-between moment we are currently in.”

Hannah, represented in Vancouver by Equinox Gallery and in Montreal by Pierre-François Ouellette art contemporain, is renowned for creating tableaux vivants that subtly re-enact and re-contextualize historic events and iconic artworks. Admirers include Sir Elton John, who has purchased a number of Hannah’s works.

After a trip to New York and Ottawa — where he attended meetings as a board member of the National Gallery of Canada — Hannah returned to his B.C. home on March 10 just as the COVID-19 crisis “hit the fan.” He soon learned that a prison-related art project he was about to embark upon had been cancelled. After a few restless days at home with his family, the genesis of “Social Distancing” started to take shape.

Hannah, who has exhibited at Concordia’s Leonard and Bina Ellen Art Gallery and whose work graces the glass facade of Loyola Campus’s PERFORM Centre, has since ventured around his Burnaby community every other day with tripod and camera in tow. Subjects are chosen at random — a masked woman holding a skateboard aloft, a nonchalant steelworker taking a drag from a cigarette on a park bench, a middle-aged couple standing inside their dry-cleaning business  — and shot with a long lens from a distance of at least five metres.

‘What’s this all about?’

Not everyone Hannah approaches agrees to be filmed.

“I get a lot of nos from people and a lot of ‘What’s this all about?’,” he says. “But I enjoy these little conversations.”

It all has a powerful cumulative effect, offering not only a sense of how people in multicultural Burnaby are contending with challenges imposed by the pandemic — often in mundane, workaday ways — but imparting a feeling of universality at a time when the world is united in crisis.

You have to turn the volume up to fully experience Hannah’s “Social Distancing” project, too. Scored at first by Daniel Ingram, and by Brigitte Dajczer, MFA 05, since March 22, the unmuted videos convey a haunting emotional resonance.

“Working with Adad has brought me back to the wild, creative energy we had when we were doing our master’s degrees together at Concordia,” says Dajczer, a successful composer, producer and multi-instrumentalist. “I see so much in [the subjects] that I am compelled to write music for them. If there’s one thing this project speaks to it’s that there’s a vast cross section of humanity collectively living this pandemic, yet we are all coping in our own unique ways.”

“Social Distancing” has also helped its creator cope and given him a sense of routine during this time of prolonged isolation. Significantly, says Hannah, new layers of meaning have been revealed as the project has evolved.

“It’s allowed me to reach out to people and be socially active, in a way, which is really important. I feel like it’s exposing some kind of arc, putting individual points together, creating a narrative of some kind the deeper I get into it. You’re getting a sense of what people were like at the beginning of the crisis, to now, and beyond. So I think I’ll keep doing it.”