The former Montreal Canadiens and Expos PR man has found his stride as host of his own talk show
|
By Richard Burnett, BA 88
Source: Concordia University Magazine 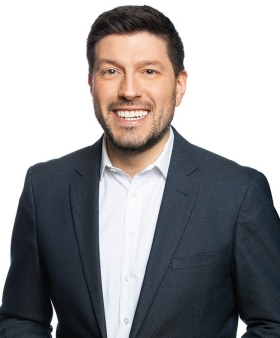 ‘When I look at my career, everything came out of Concordia, and all the connections I made there.’

The dynamic Elias Makos, BA 04, ended 2018 with a bang when he launched The Elias Makos Show on top-rated CJAD radio on Dec. 31.

The former Montreal Canadiens and Montreal Expos PR man, who became a popular personality with long-running on-air stints with CTV and Citytv, has found his stride as host of his own CJAD talk show which airs daily in the coveted 9 a.m. to noon slot.

Elias Makos: There is no hardest part of my job. I got really lucky. I think I’ve worked reasonably hard over my career, I’ve learned a lot of things.

I studied at Concordia, worked in the journalism department for seven years, all my work at CTV and Citytv and all the other places, it prepared me for this job at CJAD.

I don’t think there is anything ‘hard’ in my job. It’s a thrill, to be honest. The job is high-energy, it’s a newsy show and something that I thrive on.

You must be happy you don’t have to wake up at 4 a.m. anymore.

Oh my God! The schedule I had as a host and producer on Citytv’s Breakfast Television Montreal was the worst! I was constantly worried about getting enough sleep. But I have a great schedule today, and that also changes everything. Now I have a social life.

When I meet people, many of them say, ‘It must be so tough to keep track of everything, to be on top of all the stories.’ It isn’t easy, but that is who we are. Radio hosts are already of that mindset, they love the news. I’m a voracious consumer of news as well. I relish that stuff.

You worked for the Montreal Expos before they left for Washington, D.C., in 2004. Do you think Montreal will get another Major League Baseball team?

Yes, it is only a matter of when, not if. And I say that without any hesitation. It’s happening. The process we are seeing is them figuring out how it happens, and when it happens. We’re getting a team back, you can take that to the bank.

Will they be called the Expos?

If it’s a full-time team in Montreal, or a team that plays the majority of their schedule in Montreal, then they’ll be called the Expos.

It did everything. I was speaking to some journalism diploma students recently and told them I was so happy to be there during their orientation because, I said, “I’d like to give you some advice that all journalism students should get when they start: Look around the room and see all the people you have just met and I guarantee you that in three, five and 10 years these are the same people who will be hiring you, and you will be hiring the people around you. So be nice to all these people because the connections you make here will pay dividends.”

When I look at my career, everything came out of Concordia, and all the connections I made there. Journalism professor Peter Downie called me up in September 2004 – the same week the Expos announced they were leaving for Washington – and invited me to apply for a technical instructor position, because today every journalist has to be a technical wizard. That is how my career took off.

Peter Downie at Concordia was pivotal, but I also owe a lot to former Concordia professor Bob Babinski, who saw something in me when he put together the team Citytv had when they launched their new station in Montreal. I know that if I hadn’t ended up at Citytv, there is no way I’d be sitting in this chair today at CJAD.