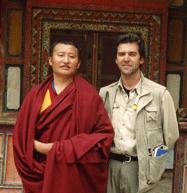 J.F. Marc des Jardins joined Concordia in 2005 as Assistant Professor after completing a postdoctoral degree on Conflict Resolutions at the Institute of Asian Research at The University of British Columbia.  He teaches courses on the various Buddhist traditions (Indian, Tibetan, Chinese, Japanese and South Asian) as well as Chinese Popular Cults, Daoism and Tibetan religions. His research focuses on the Tibetan Bön religion and local societies and he has been actively engaged in field-based research along the Sino-Tibetan borderlands since 1991. Dr. des Jardins combines anthropological field methods with textual analysis and historiography. He has recently published a monograph entitled Le sûtra de la Mahâmâyûrî: rituel et politique dans la Chine des Tang (618-907) (Presse de l'Université Laval 2011) which is a study and translation of a key Chinese Buddhist grimoire important in the history of esoterism in Buddhism. In this work, he illustrates how Chinese indigenous cultural and political traditions were highly compatible with the Buddhist ritual traditions of Medieval India.

In 2011, Dr. des Jardins was promoted to the rank of Associate Professor, and is currently working on different translation and research projects on the indigenous Bön Research which seeks to promote and support scientific research on indigenous Tibetan cultural and social traditions.

UNDERGRADUATE COURSES(selection) all taught at Concordia University unless stated

HIST 378  History of China; from antiquity to theend of the Tang dynasty (The University of British Columbia)

RELI498E 616W Scriptures of the Numinous : Readings of Daoist Scriptures