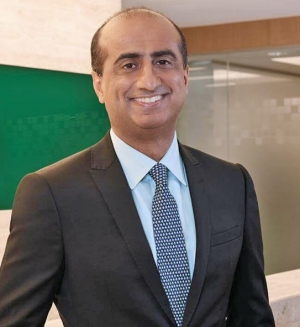 “I have established a scholarship at Concordia for people who have financial needs and an entry to get into the actuarial profession.”

Naveed Irshad has worked at Canada’s biggest insurance company, Manulife, for more than 20 years. He has advanced in leadership roles while developing a deep understanding of the global industry.

In 2014, Irshad was appointed president and CEO of Manulife Singapore, where he was responsible for the overall development of business operations in the country. Today, he is Head of North American Legacy Business, one of the top management jobs at the company.

“I had a very strong and rigorous education. I did a Bachelor of Science in Actuarial Mathematics, which is a pretty technical subject, but I had some good mentors to help me through. One nice thing about that program was that the class sizes were pretty small, so we got a lot of direct interaction with the professors, which was very helpful.”

“When I started running Manulife operations in Singapore in 2014, we were really a third-tier company and had, for example, a 2-per-cent market share. By the time I left at the end of 2017, the company was No. 1 in the market with about a 20-per-cent market share that concluded the distribution arrangement with the largest bank in Singapore. We had more than tripled our staff size, so it was really gratifying to see those results.”

“I try to generally push myself to take roles out of my comfort zone. The job in Singapore is an example of this because it was the first time I was a general manager. I'm an actuary, which is a very technical discipline and I'm naturally an introvert. Running a company means dealing with a large distribution sales force, which requires me to be out there. I put myself out there, and it was certainly very uncomfortable for me, but I just pushed myself to do it.”

“I have established a scholarship back in Concordia called the Irshad Family Bursary in Actuarial Mathematics. It’s a scholarship for people who have financial needs and an entry to get into the actuarial profession.”