Well prepared for life on the Hill

Sherry Romanado, EMBA 11, is Member of Parliament for Longueuil—Charles- LeMoyne, Que., on Montreal’s South Shore, and is Parliamentary Secretary to the Minister of Veterans Affairs and Associate Minister of National Defence. 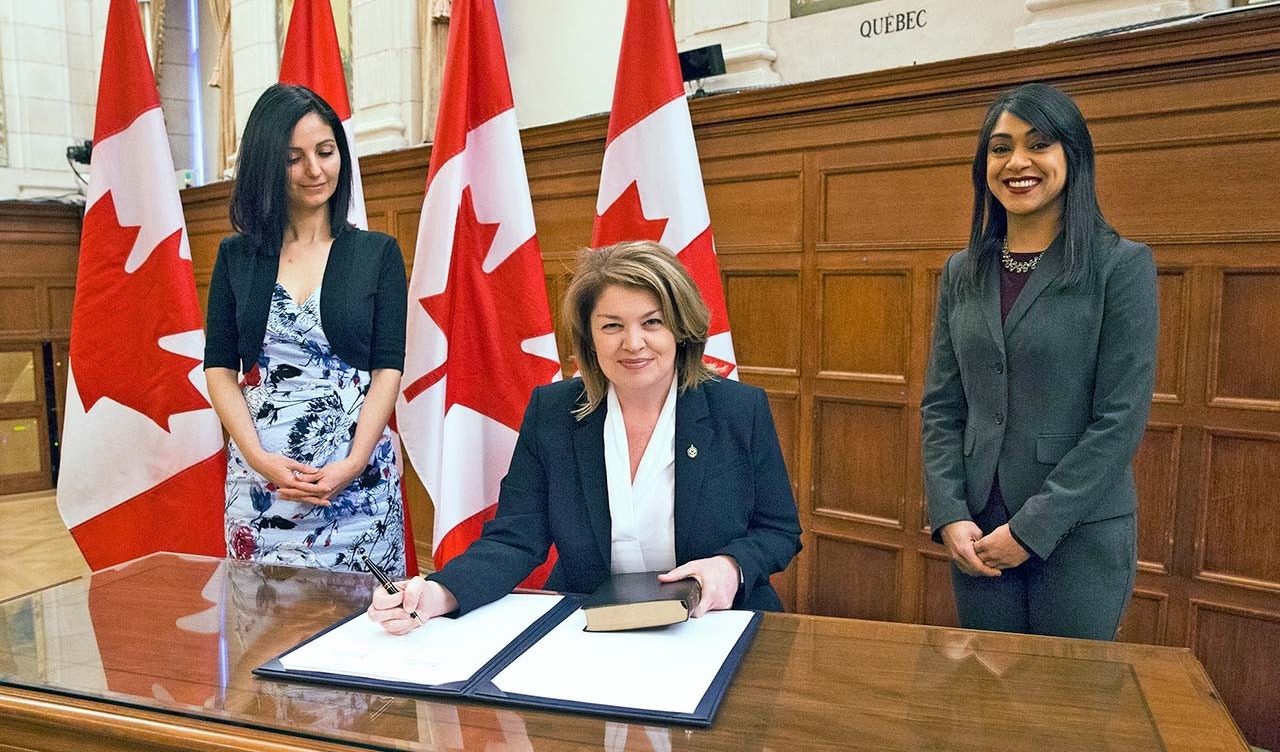 Sherry Romanado’s official swearing-in as Parliamentary Secretary to the Minister of Veterans Affairs and Associate Minister of National Defence in Ottawa in January 2017.

I still become overwhelmed when I look up at the Peace Tower on Parliament Hill, despite being elected nearly two years ago, on October 19, 2015. Who would have thought that one day I would be a Member of Parliament representing my home town? Then again, who would have thought that I would successfully complete my MBA degree despite not having an undergraduate degree?

I decided to pursue my MBA in 2009. After researching various programs, I felt that the EMBA offered at Concordia’s John Molson School of Business was the best fit for me; its schedule would allow me to continue to work full-time and, as a non-traditional student, I found the support offered by the program reassuring.

I wasn’t wrong. Once I was accepted into the program, I quickly learned that not only would I obtain the competencies in strategic planning, finance, human resources and operations management, among other areas, but, importantly, also learn to master time management. If I were to succeed, I would need to do my required readings during every moment of downtime — my daily commute to work became my reading time — and to become hyper- organized. I proudly crossed that convocation stage and earned the coveted MBA in 2011.

I’ve been involved in politics since 1998 and, in fact, was class co-president during my MBA. In late 2013, I decided to take the leap and run for public office. I was named the official candidate in the Longueuil—Charles-LeMoyne riding for Team Trudeau in May 2014 and went on to win the election in October 2015.

Once elected, those same competencies I learned in my MBA were a huge asset: setting up offices in the constituency and on Parliament Hill, hiring staff, managing a budget and, of course, managing incredibly demanding schedules in Ottawa and in the riding.

My first year in office was a whirlwind. I had the opportunity to serve on two standing committees of the House of Commons — Veterans Affairs and National Defence — as well as on the Special Committee on Electoral Reform.

While most MPs sit on one or two committees, there I was on three — again, the time management and hyper-organization skillsets kicked into high gear and I was often asked how I was able to juggle everything at once.

Then came the surprising phone call from our Prime Minister in late January 2017 telling me my hard work on the Hill hadn’t gone unnoticed: I was asked to take on the role of Parliamentary Secretary to the Minister of Veterans Affairs and the Associate Minister of National Defence.

I still get a lump in my throat when I think about it — my two sons are currently serving in the Canadian Armed Forces and so the ability to help change public policy to support our brave women and men in uniform and those who have served our country is the reason I decided to run for office.

As I type this from my riding office, I’m staring at my framed MBA diploma proudly displayed on my wall. I have a similar reminder of my time at Concordia in my Parliament Hill Office: a class photo with the other 24 EMBA students. I’m still in touch with many of my MBA classmates and consider them friends for life.

If I ever wondered whether pursuing my MBA at Concordia had prepared me for life on the Hill — I don’t have to wonder any longer. It absolutely did.