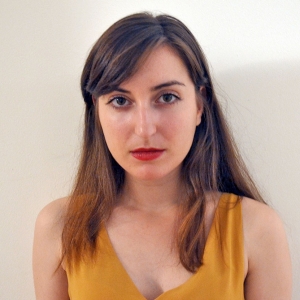 The Irving Layton Awards for Creative Writing, worth $500, are given to undergraduate students for works of poetry and fiction.

Fawn Parker is the 2017 fiction winner for her story WunderHorse II.

My office was moved from the second floor to a split room by the front entrance of the factory. They said it was so I could be more readily available to offer my wealth of knowledge. You might not believe it but I was one of the best and most precise at WunderHorse II, despite my being moved and consoled. I had the steadiest hand in the factory and sometimes I even painted other employees’ copyrights and years on their horses bellies for them.

You also might not believe it because I didn’t look the part. I didn’t have anything eclectic going on with my clothing. But that’s how us true professionals are, we don’t always look the part. We don’t hone the aesthetic component because we’re busy honing our craft.

I painted the small plastic horses in such a way that I could have gained international recognition, if not for the Wunderhorse II company name overshadowing the identities of its individual employees. When Gary Malkez from my same floor came to me and confessed he was having trouble with the gradient pattern on the dapple gray, I got him doing it in an afternoon.

That was the first day Gary Malkez kissed me, in my old office on the second floor with the paintbrush still in his hand. He held it behind his back like he was embarrassed and when he left the room it was still behind his back, all the way back to his office like a pair of crossed fingers.

Me and Gary Malkez did some fine work at the Wunderhorse II factory. You would have been impressed had you snooped on us painting the small plastic horses. Though you would have found it nearly impossible to snoop due to the abnormally high level of security at the factory.

When the others’ office doors were shut, me and Gary Malkez would paint our horses together and come up with made up names for new horse breeds. Gary Malkez would joke that he would start painting them on the horses’ bellies and wait for them to become integrated into normal horse-lovers’ vocabulary. When I thought of a really funny one he would laugh for a long time and then kiss me.

Me and Gary Malkez set up a shallow shelf in his office on the second floor and lined up my defect plastic horses all in a row, and labelled them with the funny new horse breeds. He gave me a spare key to his office so I could go in and see the defect horses whenever I wanted to.

One evening I stayed late and re-painted a defective plastic horse sky blue and painted “Gary Malkez” on its belly. Gary Malkez had already gone home so I used my key to go into his office and put the sky blue horse on his shelf.

All of the defective plastic horses looked very beautiful up on the shallow shelf all in a row. One of them near the end was a palomino missing one of its front legs, which I had not seen before. I took Gary Malkez’s mystery palomino and put it in my purse.

The next day I saw that Sarah the receptionist was in her office with the door open so I went in with the defect palomino and said, Please, please other Sara, tell me about this palomino horse. She refused to look at the horse but she told me Gary Malkez had kissed her.

I went back into my office and dropped the defect palomino out of the first floor window. On my smoke break, instead of having a smoke, I went to the staff bathroom and made myself orgasm thinking about Gary Malkez kissing the Sarah girl who answers the phone.

I wrote Sarah a note that said thank you for all of the defective plastic horses, and slipped it under her office door.

I kept my mouth shut around Gary Malkez. I brought him more horses but I stopped painting them beautiful colours like the colour of the sky. When he saw the sky blue defective plastic horse, he kissed me for a very long time.

Me and Sarah became good friends and it was easy because I’m nice and she’s nice and we’re both very pretty. She invited me over to hang out and we sat on her living room couch and put our hands in each others’ pussies. She had a way of smoking a cigarette that didn’t crinkle up her mouth, and when I pointed it out she said that it was on purpose.

When I got home I cut up my driver’s license and my library card and all of my pieces of paper and plastic that said Sarah, Sarah, Sarah.

Gary Malkez sent me an email while he was in his second floor office and I was in my new office on the first floor. He attached a spreadsheet with all of our made up new horse breeds and number from 1-10 rating how good he thought they were.

I went up to visit Gary Malkez in his office and we laughed about the spreadsheet and then we kissed.

In the factory an alarm began to go off and the lights were flashing. The receptionist Sarah called up to Gary Malkez’s office and told him that a pipe had burst and employees were evacuating the building. Gary Malkez felt upset thinking about all of that water and how it related to his miraculous birth in the middle of a lake.

I waited in Gary Malkez’s office while everyone evacuated the building. I got up close and looked at the photographs on his walls, of different angles of Gary Malkez sitting at the desk in that very office. I opened the drawers in his filing cabinet and pulled out all the pages with handwriting. In his desk drawers he had notepads and journals and a photo album. I looked through all of Gary Malkez’s documents one by one.

I poured the water over Gary Malkez’s documents and I felt like I’d eaten him and swallowed him up whole. I paged Sarah who wasn’t in her office because she’d evacuated but I’d already swallowed her whole too, anyway. I’d made both Sarah and Gary Malkez cum and I’d read both of their diaries. I sat down like a three-headed monster at Gary Malkez’s desk and gathered the sopping wet documents into a clump. Then I went to the shallow shelf with all of the defect plastic horses and I paired them up in twos so that they looked like they were kissing.