She stands up for Haiti

She looks every inch a rock star in her black suit and sparkling red skinny scarf. Yet Régine Chassagne, BA 98, LLD 16, multi-instrumentalist and founding member of famed indie rock band Arcade Fire, is modest and soft spoken when she arrives for an interview in the green room at Théâtre Maisonneuve in Montreal. On this November evening she will receive an honorary doctorate from the Faculty of Arts from her alma mater, Concordia, for her “commitment to Haiti and her impact on the international music scene.” 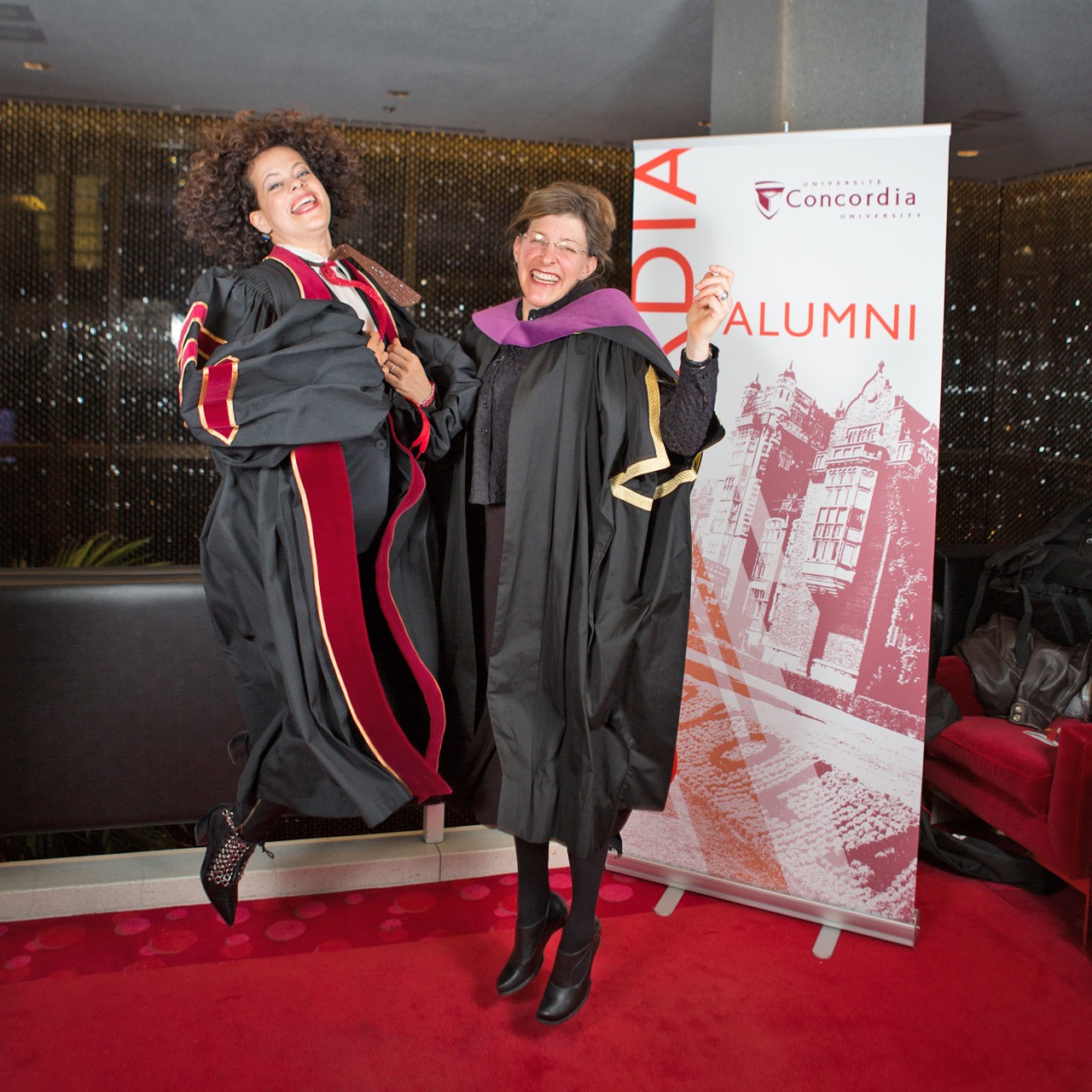 Chassagne celebrates receiving an honorary degree from Concordia with Rebecca Duclos, dean of the Faculty of Fine Arts, on November 7, 2016.

The evening is a proud, emotional one for Chassagne, whose Haitian-born parents fled the dictatorship of François Duvalier in the 1960s. Montreal native Chassagne co-founded the KANPE Foundation in 2010 with Dominique Anglade, now a Member of the National Assembly for the Quebec Liberal Party. Chassagne says KANPE is intended “to play an integral part in the fight to help Haiti break free from a vicious cycle of poverty.” It’s a role she has effectively paired with her success in Arcade Fire.

“I think my late mother would have been very proud, as is my father. Both my parents attended Concordia,” says Chassagne, referring to Marie Chiappini-Chassagne, BA 85, and Stanley Chassagne, BSc 75, MSc 78. “I remember going to my own graduation with both my parents, so it feels quite special to be here again, receiving this honorary degree.”

It’s a message Chassagne repeated onstage during the graduation ceremony. “I want to give thanks to my parents because we were taught to appreciate everything we had even if we didn’t have that much,” Chassagne told the audience. “You had food, a roof, water and a bed. We were taught to remember those who don’t have all of these things.”

It’s a lesson Chassagne never forgot. During her convocation speech, Chassagne recalled that for Arcade Fire’s “first shows in Montreal, we played in lofts where admission was $3 or a can of food. It was still the same culture of sharing: no matter what you do, you keep a little for those who have less.”

Arcade Fire would, of course, go on to become one of the biggest rock bands in the indie world, winning popular and critical acclaim as well as a Grammy award for Record of the Year in 2011, for their classic album The Suburbs. The group has also sold out concerts worldwide.

Arcade Fire’s members remain committed to causes close to their hearts. The KANPE website reports: “Arcade Fire has donated $1 per ticket, both to Partners In Health and KANPE, for every concert since 2005. To date, Arcade Fire has raised over $2 million for Haiti, trained more than 1,000 volunteers and signed up over 50,000 fans.”

Backstage at Théâtre Maisonneuve, Chassagne says, “I am only able to do what I do, was only able to co-found KANPE, because I was so lucky to have a band that has had a certain amount of success, so I can actually be doing this interview and people can hear about KANPE. Because of the chances I got in life, I have been able to bring Haiti with me to other places. That’s what life has given me. I’m just doing the best I can.”

KANPE — which means “to stand up” in Haitian Creole — helps families in extreme poverty achieve financial autonomy. “We’re a very small organization, and the geographical area where we work is also very small,” Chassagne explains. “We seek out the most vulnerable, families that don’t have adequate housing or can’t provide for their children, and we’ve had really good results. We’ve had hundreds of families go through the program, start a micro business and send their children to school. The more you invest in children, and when they see their parents succeed, the stronger an example you set for them.” 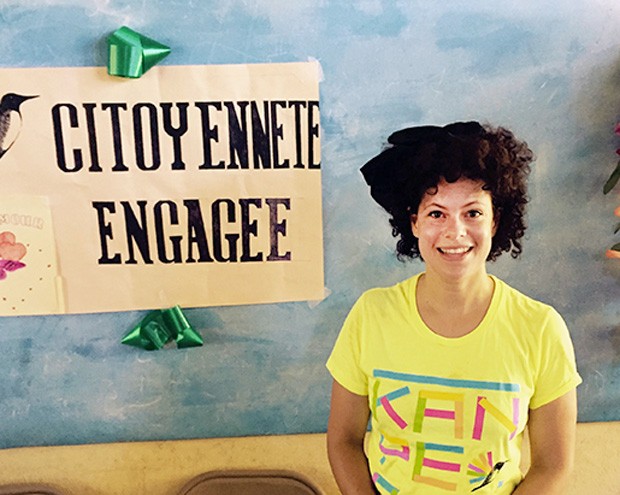 Régine Chassagne in Haiti in 2015.

Even after Hurricane Matthew devastated parts of Haiti in October 2016, Chassagne says Haitians remain tough and resilient. “After another hurricane in 2008, in a little village called Petite Rivière that was completely washed out with mud, the only water source was this hole which made you nauseous when you looked inside it. And I saw this man with a little pot of water and a little fire with an iron, and he was ironing his shirt,” recalls Chassagne. “It was the crispest white shirt. Then he put his shirt on — it was a really neat shirt — and all around the place was covered in mud.”

Chassagne pauses, then says, “Haiti won its independence from slavery and no one can take that away from the people, no matter how much or little they have. They have faith in themselves, a strength and a pride that remains with the people at all times, a dignity you can’t take away.”

Chassagne says she learned the culture of giving back from her parents, as well as while at Concordia and especially from her professor Iain Cook, BA 93, MA 97 — a sound composition instructor in the Department of Communication Studies and former frontman of Montreal punk band Fail- Safe. “I remember my teacher Iain Cook talked about giving his time to the Cree community in James Bay [Que.], and that influenced me,” she recalls. “Though at the time I did not yet know what I could do, it definitely gave me an example to follow. So when I found what I needed to do, I was ready for it.”

For her philanthropic leadership and public service, Chassagne was also awarded the Social Impact Award by the Montreal International Black Film Festival in 2014, and Arcade Fire received the 2016 Allan Waters Humanitarian Award from the Juno Awards.

Meanwhile Arcade Fire moves onward. The band will continue to host benefits such as its Naïve Melodie fundraisers. “It was a moment of pure magic!” Chassagne says of the time Madonna attended Naïve Melodie at the Phi Centre in Old Montreal in September 2015. The group will also keep up its annual KANPE Kanaval concert; the 2016 edition featured David Byrne and the Preservation Hall Jazz Band at Montreal’s Society for Arts and Technology.

She seems to find success in all her endeavours. Chassagne, husband Win Butler of Arcade Fire and Toronto restaurateurs Jen Agg and Roland Jean launched the popular Haitian restaurant and bar Agrikol in Montreal’s Gay Village. Agrikol (agrikol.ca) was named one of the Best New Restaurants in Canada in 2016 by En Route magazine. And of course fans hope a new Arcade Fire album will be released in 2017. “We’re working on it!” Chassagne says.