I always thought I wanted to write fiction. 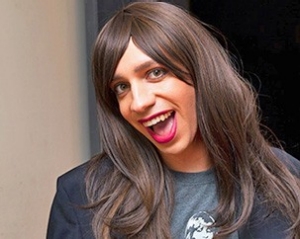 Tranna Wintour was one of seven Concordia stand-up comics who performed at the alumni event, Comedy Cheer for the Holiday Season, in Montreal in November 2016.

I majored in creative writing at Concordia and I remember being immediately intimidated by the students in my program.

They were so sure of themselves and their objectives. They read James Joyce and actually enjoyed it! I couldn’t even get past the first page of Ulysses without passing out. They spent hours each day writing and rewriting, all while I was marathoning Paula Abdul’s ill-fated reality TV show, Hey, Paula!

Although I was a straight A student (yes, I had to throw that in here, although those As were much more a reflection of my mastery of the art of B.S. than hard work), I quickly understood the world of academia was not for me. I learned that writing prose fiction was not for me either and, for the first time in my life, I had no idea what I wanted to do. Panic struck.

Everyone around me seemed to know exactly what they wanted. I tried to choose a career path based on my abilities, but nothing felt right. Eventually I had to accept the fact that I had no answer to the question, “What do you want to be when you grow up?”

Embracing the unknown allowed me the freedom to live for the moment and to build my life around the things that simply made me happy, like travelling regularly to New York City to see as many Broadway shows as I could. I can’t count the number of times my friends and I lined up at the discount ticket booth. (Side note: the best tickets we ever scored were second row centre seats to Follies starring Bernadette Peters!)

I thought seeing Broadway shows was just fun, yet the inspiration I felt in those theatres was profound. As a kid I had dreamed of being a performer. A dream that disappeared when, in elementary and high school, I decided to be as invisible as possible to protect myself from being bullied. In those years I didn’t have the confidence to believe in myself as a performer. But slowly, through moments of joy and inspiration, like seeing BP in Follies, that performer energy in me was being reawakened.

One sweet day, in the halls of Concordia’s J.W. McConnell Building, I ran into my sixth-grade English teacher, who was teaching at Concordia. The last time he had seen me I was 12 years old. Our exchange was brief, yet he said something that stayed with me: “Please tell me you’re performing or doing something in theatre.” I could not believe this man, who knew me for one year in my childhood 10 years prior, remembered me as a performer. This encounter with him had to be a sign, a force trying to get me to where I needed to be: on stage.

It would still take a couple more years and a few more signs from the universe before I had the confidence to make my debut as a stand-up comedian, but I did finally do it. I’ve been performing for three years now and these have been the happiest, most creative and professionally fulfilling of my life. I may have never got there if, in the halls of Concordia, I had not allowed myself to embrace the unknown, to be free, to be open to experience, to listen closely to all the small, seemingly insignificant moments that were actually little nudges from the universe, leading me onto the road I needed to be on. I am so happy I chose a life stranger than fiction.