The Concordia community keeps raising the bar — and funds for students.

Under a beautiful early fall sky, more than 600 staff, faculty, students, alumni, parents and friends joined together for the university’s 27th annual Shuffle. The 6.5-kilometre walkathon from Sir George Williams Campus to Loyola Campus raises funds for scholarships and bursaries.

Shufflers at the September 23 event brought in an all-time high of $84,000 — and counting. 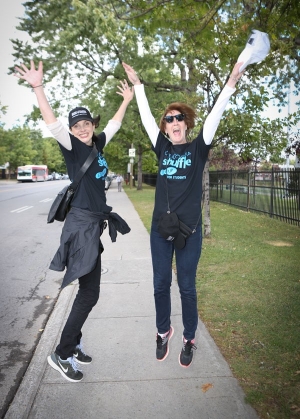 Concordia President Alan Shepard helped launch Shuffle 27 in the atrium of the Engineering, Computer Science and Visual Arts Integrated Complex. After the walk, he warmly welcomed the Shufflers at the President’s Picnic, held on the Loyola Campus grounds in front of the PERFORM Centre.

“Congratulations on another successful Shuffle!” Shepard said, before announcing the total funds raised, proudly stating that it was a new Shuffle record.

More than 750 graduate and undergraduate students have benefited from Shuffle-funded awards since 1990, and the number grows each year.

Bram Freedman, Concordia’s vice-president of Advancement and External Relations, thanked the advisory committee and its chairs, Graham Carr, who was named Concordia’s provost a few days later, and Danielle Tessier, assistant secretary-general of the University Secretariat.

He also pointed out that 2016 is the 100th anniversary of the Loyola Campus and invited guests to enjoy some birthday cake to celebrate.

Shuffle is organized by Concordia’s Advancement and Alumni Relations and a team of dedicated volunteers.

Full day for all

Shufflers at the President's Picnic

“This scholarship doesn’t just represent financial help for me — more importantly it symbolizes my achievements,” she said. “It is a reminder of where I’ve been, how far I’ve come and where I intend to go in the future.”

The Faculty of Arts and Science group, led by their dean, André Roy, won the best online fundraising team honours.

Thanks to the many Shuffle sponsors, dozens of prizes were raffled off, including travel vouchers, iPads, hotel and store gift certificates, and much more. All prize winners are listed on the Shuffle website, concordiashuffle.ca.

For the first time, a crew of volunteers rode BIXI bicycles along the Sherbrooke St. route to cheer on Shufflers.

Virgin Radio DJ Charli Paige acted as MC at the walk’s kickoff, while Le Gym staff helped get Shufflers warmed up before the big walk and PERFORM Centre personnel helped participants stretch and cool down afterward.

It’s not too late to give to Shuffle!

You can make your gift at concordiashuffle.ca/give-now.