Enough Said: The first Concordian to sail around the world

An ordinary person wanting to do something extraordinary
|
By Tony Hong Truong
Source: Concordia University Magazine 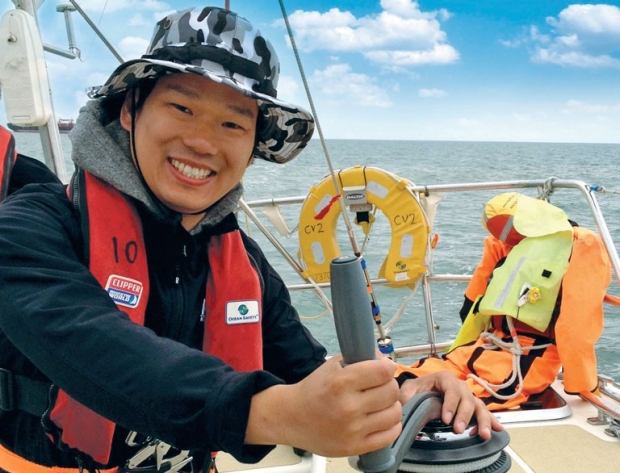 Tony Hong Truong training for his clipper round the world ocean race.

I lead my life by following this mantra: Purpose. Patience. Perseverance. That’s why, as you read this, I’m participating in an amateur yacht race across the globe, called Clipper Round the World (clipperroundtheworld.com). At 64,000 kilometres, it’s the world’s longest ocean race. We’ll be sailing on a 70-foot (21-metre) ocean racing yacht, and it will take up to 11 months to complete. It’s an endurance test like no other.

This is the 10th edition of Clipper Round the World. It’s the only global race for amateur sailors, with no previous sailing experience necessary. The participants are everyday people; nurses, teachers, doctors, retirees, students, bricklayers, sportsmen and women, bus drivers, bankers and many more join together to take on the world’s toughest ocean conditions. 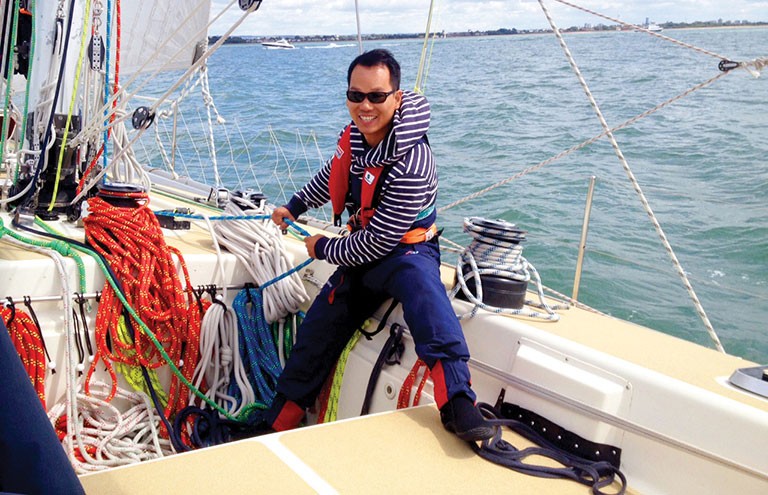 The sea does not distinguish between Olympians and novices. There’s nowhere to hide — if Mother Nature throws down the gauntlet, we must be ready to face the same challenges as a pro.

The race’s organizer, Clipper Ventures PLC, supplies participants with a fleet of 12 identical racing yachts, each with a fully qualified skipper to safely guide the crew. I’ll be teamed up with Diane Reid, the first female Canadian skipper in the race’s history. Joining Reid are 41 crew members from all over the world, including 16 from Canada; I’m the lone participant from Montreal.

Inspired by the achievement of Mylène Paquette, who rowed across the Atlantic Ocean, and after reading Paulo Coelho’s The Alchemist, I became determined to follow my dream to travel around the world, so I applied for the Clipper Round the World Race. It is my biggest personal challenge, and I believe that I will become the first Concordian — and one of the first Vietnamese — to circumnavigate the globe.

The participation fee for the Clipper Race is CAD $90,000, which I raised through donations. A part of the money I raise will also go to Quebec’s Make-A-Wish Foundation and Unicef UK, which is the official charity partner of the Clipper Race.

Furthermore, 2015 was the 40th anniversary of the end of the Vietnam War, which led to the “boat people” — the 800,000 refugees who fled Vietnam by boat in the years following the war.

I decided to join the race — even though I had no prior boating experience — in part because I wanted to pay tribute to the boat people, who included members of my family. I want to emulate their courage and sacrifice, and live out their message of overcoming obstacles. The fifth leg of the Clipper Race will bring me to the South China Sea, where my family’s journey started 40 years ago.

As well, I’ll be taking this opportunity to say thank you to Canada and Quebec for the freedom this country has given me, freedom to achieve my dreams and ambitions. This freedom is non-existent in many parts of the world, so on behalf of all Vietnamese people resettled overseas, I will use this race to say thank you to all the other countries that ad- opted us, too.

I’m just an ordinary person wanting to do something extraordinary. As I challenge myself to cross oceans and face stormy seas, I hope to inspire others to do the same with their lives.

Tony Hong Truong works at KDC Knowlton, a personal care products company based in Knowlton, Que. He wrote this article prior to departing on the Clipper Round the World ocean race on August 31, 2015. Please visit Truong’s website at moderntribesmen.com to contribute to his quest.