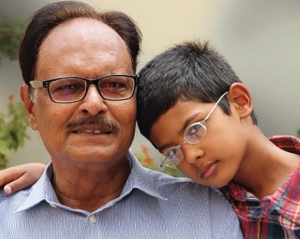 Owais Uddin Ahmed and his son.

My childhood in Pakistan was marked by determination to rescue my mother from the physical and psychological abuse of my father. I was the apple of my mother’s eye and to me, she mattered more than the world, but our love for each other did not mitigate my father’s abuse toward us. Since divorce was not an option in our family, I decided to get a first-rate international education to adequately provide for my mother and myself.

I arrived in Canada in 1974 with a student visa and some money borrowed from friends. Soon after arriving I found out I needed a separate work permit to support myself, but obtaining one was nearly impossible in those days.

The first school I attended, Lambton College in Sarnia, Ont., recommended me for a work permit but I was denied. Nevertheless, I engaged in minimum-wage part-time work so I could get by long enough to pay back my debts.

I started at Concordia in September 1974. In Montreal I roomed with a fellow Pakistani who had abandoned his studies to work full time. One night after midnight there was a knock at the door to our shared room. The immigration authorities had come to arrest my roommate. As soon as he opened the door he was detained. The officers then noticed me immersed in my textbooks and asked if I worked too. I truthfully told them that I worked only a few hours a week and regularly attended classes.

The officers exchanged some words in French before politely asking me to follow them. After a long night of legal proceedings, my roommate was sent for deportation but I was allowed to return to the apartment. I started receiving an onslaught of confusing paperwork. Thankfully, a lawyer friend helped me by using delaying tactics so I could continue studying. I have the impression that the immigration authorities obliged me as much as they could without neglecting their duty.

Eventually my lawyer friend, who never charged me a penny for legal counsel, managed to arrange a temporary work permit for me. With the short reprieve this granted I had breathing room to quickly make enough money to last a little longer. When I reverted back to full-time study, I frequently skipped meals to meet other expenses and pay back loans.

Concordia helped me stay alive during this time and I credit my university with helping me become who I am today.

My professors showed me the light at the end of the tunnel. I wish to mention three staff who also made an impact on my character: there was Larry Boyle, the director of Student Affairs, his secretary and the woman who handled student fee matters. Through them I saw the goodness of Canadians. They allowed me to continue my studies despite defaulting on tuition payments.

Outside of Concordia, I experienced the kindness of Canadians at the Royal Victoria Hospital, now the McGill University Health Centre (MUHC). I was hospitalized there for jaundice in the summer of 1975. The hospital saw I was unable to pay my out-of-pocket expenses and cancelled the final payment completely.

Through these experiences I saw how Canadians listen without considering caste, creed or colour. They can help someone in need without injuring the other’s self-respect. I appreciated this when I felt helpless borrowing as little as $10.

I had completed 87 out of 90 credits for the Bachelor of Commerce degree when I received an urgent letter from my mother. I contacted Dr. Boyle, who allowed me to complete my last three credits from Pakistan. In March 1980 I returned home with only $50 in my pocket but rich with experience. My mother was happy to see me but her health was rapidly deteriorating. She had suffered a stroke and started to develop dementia, both incurable conditions. I took care of her in and out of the hospital for more than 25 years.

Thanks to my education I was able to get a good job and advance quickly, later starting my own automotive parts manufacturing business. My financial stability allowed me to afford to care for my mother for so long. Government healthcare is nonexistent in Pakistan and private medical care is too expensive for the common person. When my mother finally slipped into a coma I broke down and cried. Miraculously she heard me crying and whispered “don’t you worry” before drifting off.

My mother was buried at sunset on June 28, 2006. I felt this was the sunset of my life, too. It was hard to understand that life goes on. At her wish I married and was blessed with a son, named after my mother. He is now eight years old and though I am approaching 67 we get along quite well, just like Mother and I.

After all these years, I recently located and reimbursed those who dismissed my debts in my time of great need, including my final payments to Concordia and the MUHC.

Now when I look upward on starry nights I feel my mother smiling at my success and thanking all those who made it possible.