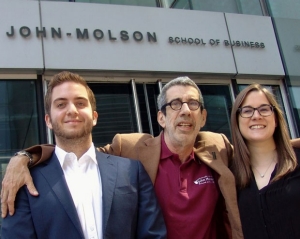 That’s not by accident. Their success is thanks to the perseverance of the competitors, who are supported by a dedicated team of some 70 volunteer coaches that includes alumni, faculty and business professionals. It’s also due to the attitude and commitment of the business school itself.

“The lessons students learn from tackling real-life cases and the networking opportunities they get from participating in the competitions are invaluable,” JMSB Dean Steve Harvey says. “And employers recognize that.”

Students in the program also enroll in a three-credit case competition class taught by Mark Haber, BComm 71, the competition committee’s faculty advisor. He says the course helps students “think about everything.” It’s not just academic, he adds — it’s a thought process.

Over the years, JMSB has developed the largest — and one of the most successful — undergraduate case competition programs in the world. The program is run by the John Molson Competition Committee (JMCC), made up of 17 students and Haber. The competition committee essentially manages the teams while organizing workshops, events and a wide range of activities designed to boost performance and strengthen bonds.

Every year, more than 400 undergrads try out for a chance to represent JMSB at some 30 international competitions in a full spectrum of disciplines such as accounting, entrepreneurship and international business. “We have to find students from disciplines that complement each other so they combine their knowledge,” Haber explains about the process of choosing teams.

Competitors are carefully selected after hours of theatre-like auditions. To make the cut, students must demonstrate academic expertise and an ability to come up with business solutions quickly, as well as be able to deliver an engaging presentation. The program admits about 150 students, and eventually 72 of those will fill the spots in academic teams of two to four people.

The students are thoroughly trained and sent to rigorous competitions that test more than just their textbook knowledge of business, tax and finance — the competitions challenge their ability to think critically, solve problems and effectively present their ideas and solutions, skills coveted by potential employers.

Before Haber got involved nearly 20 years ago, Concordia students participated in competitions, yet the school didn’t have an organized system. The program now runs like a well-oiled machine. After the demanding audition process, each team is assigned a head coach and at least one assistant coach.

For each competition, students are given a case study of a business problem, usually based on an actual issue. The team then has a set amount of time — from a few hours to a few days — to analyze the situation and prepare a detailed presentation that demonstrates a recommended solution. That is reviewed by a panel of judges, which often includes a combination of industry professionals and faculty. Students are judged on their solution, presentation and ability to handle follow-up questions.

“They’re expected to identify what the problem is, do an analysis, sometimes with research and sometimes without, come up with some alternatives and make recommendations,” says Haber, who earned an MBA from the University of Syracuse in 1972 and is a part-time lecturer at JMSB. While the coaches are in place and the students help each other every step of the way, Haber says, “I’m the guy who pushes them as hard as I can so that they build confidence.”

“We have what we call boot camps, where students go through exactly what needs to be done in a case,” says Jesse Carmichael, the committee’s former president and current academic coordinator. “We get speakers who go through different components, such as a consultant from IBM who will come in to talk strategy, or a VP marketing will come in to discuss different marketing techniques that can be used in any sort of case.”

A slice of competition

Like Carmichael, Anthony Esposito, president of the competition committee, is in his fourth and final year at JMSB. Esposito notes the competition committee hosts workshops on how to effectively use Excel or make persuasive presentations. There are also workshops on finance, human resources and much more as JMSB professors help train the young competitors. To do all this and keep up with regular schoolwork, Esposito says students have to carefully manage their schedules.

Recounting his own experiences, Esposito looks back on his 2015 JDC Central competition in Toronto, in the business strategy discipline. His team had three hours to read the case, come up with a solution and prepare a 20-minute presentation complete with slides. There were four judges, including three from the very company that needed a solution, Emco Corporation.

“In that specific case, one of the company’s profit centres was having both succession and profit issues,” says Esposito. “Basically we recommended concrete steps on how to have good leaders, good people in charge, good HR processes, etc. Then we had a couple of creative solutions on how to increase profit, decrease costs and differentiate themselves from their competitors.”

The four Emco judges asked specific questions that directly related to their company, says Esposito, and that experience made it feel very real. His presentation was a success and his team took first place. “I think most JMSB teams are a bit intense,” he says. “We put together about 40 slides in three hours and we had to read a 15-page case on top of that. It definitely works your time-management skills and your ability to work under pressure, but that’s what we’re training the students to do all year.”

Sometimes, says Haber, the solutions presented will be applied to the company in question — a good payback for their sponsorship fee. 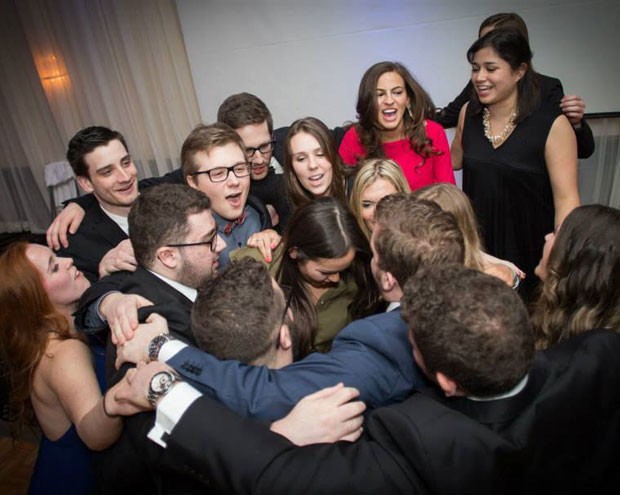 There are about 40 alumni coaches who have gone through the program themselves. “The best coaches are alumni,” observes Carmichael. “They want to give back to the program in any way they can.”

Among the volunteer coaches is Agnes Katsouros, BComm 13, currently a manager of personal financial services at TD Canada. While a student, Katsouros was on the entrepreneurship team, earning several recognitions and a gold medal at the 2013 Happening Marketing case competition. Today, she coaches entrepreneurship and her teams have been just as successful as she was. She says she owes many of her accomplishments in life to the program, and now she wants to give back.

“I stay involved as a coach because I thoroughly enjoy being part of the learning and development of my team,” she says. “Yes, it’s always nice to go home with a trophy, but the bigger reward is being proud of your accomplishments no matter the result. It really is about the process.”

Christopher Labrecque, BComm 11, is now an inside sales representative and product specialist for a private healthcare company. Looking back, he remembers his time as a competing undergrad as challenging yet also rewarding. He says competitions helped him develop his confidence, and his connection to the competition committee also helped him land his first job. His coach gave him a winning referral in the very field he competed in — human resources.

Now Labrecque coaches human resource teams all the way to the podium. “It was a privilege to be a part of the program and it continues to be a privilege for me to be involved as a coach,” he says. “Helping people achieve their goals and live their dreams is almost better than doing it yourself.”

“It really does change your university experience,” says Carmichael, who was on a debating team her first year before discovering case competitions. Her involvement has taken her to Singapore, New Zealand and Spain as well as the closer Jeux du Commerce in Quebec. “In my second year, I applied to do case competitions and I caught the bug.”

Haber says case competitions are “very infectious once you’re involved.” The committee’s slogan, adds Carmichael, is, “One passion. One family. One JMCC.” It’s a small community, she says, “where you get to know people in a different way.”

Esposito is going into his third year competing and has gone to the podium many times. Esposito and Carmichael teamed up to win Canada’s Next Top Ad Exec in April, out of 178 teams. They each took home a 2015 Chevrolet Cruze. “Usually for the academic case competitions, you win pride for your school, but there are a lot of other competitions, especially in Ontario, where you can win cars, internships, etc.,” notes Carmichael. “Companies will sponsor a case either because they are looking for a solution to a problem or they are looking to recruit top talent.”

Esposito credits the committee and competitions for helping his personal advancement. “I walked into my tryouts super nervous,” he says. “I was stuttering. I was sweating. But through my personal coaches, the boot camps, the workshops, industry professionals guiding us in practising cases and going to competitions, I have grown tremendously both personally and professionally.”

Beyond that, Carmichael says she has formed close bonds with her fellow competitors. Those friendships, she says, will last a lifetime.

Haber believes that as case competitions become more widely known in the business world, the experience helps competitors get noticed when applying for jobs after graduation. They may also get noticed by recruiters at these events. Another vital payoff is connecting to the alumni network, which is full of well-established, experienced professionals who can help new grads find top-level work as soon as they graduate.

A school that supports

Carmichael and Esposito both say the program wouldn’t be nearly as successful as it is today were it not for the backing of the university, which also helps students cover their costs. “Concordia is really, really supportive of this program,” says Carmichael. “We go to more competitions than any other program in the world and that, in large part, is because the dean sees its value.”

The man at the helm of the undergraduate competition program, Haber, says he appreciates watching students grow and learn from their experiences. A dedicated mentor to the students, Haber admits that he can be hard on them as he pushes them to victory. Yet he believes they get used to it and grow stronger under the pressure. “In my mind, if I can improve the life of half a dozen kids a year, it’s a huge success,” Haber says. “But I think we do even better than that.”