A marriage of true minds

Robert Calderisi, BA 68, was Concordia’s first Rhodes Scholar. He is the author of The Trouble with Africa: Why Foreign Aid Isn’t Working (2006) and Earthly Mission: The Catholic Church and World Development (2013).

To commemorate the 10th anniversary of Canada’s Civil Marriage Act, which legalized same-sex marriage, Calderisi contributed this shortened version of his memoir, which can be found at robertcalderisi.com. 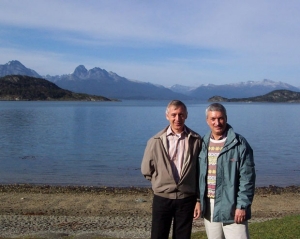 We met in Paris in an apartment on the rue Dante — appropriately, as we both loved history and both had Italian fathers. Jean Daniel was from Saint-Malo, the hometown of the “discoverer” of Canada, and I was from Montreal. But we seemed an improbable match.

I was working at the Organization for Economic Co-operation and Development (the rich countries’ think-tank in the tony 16th arrondissement) and he was studying for the priesthood. He was frugal, practical and punctual, while I was extravagant, intellectual and always worrying about arriving early. But we had common traits to build on. Neither of us took anything for granted, or believed we deserved our achievements or happiness. We enjoyed the mystery and beauty of life, but also its amusing sides.

After a year, I left to join the World Bank in Washington, D.C., and he abandoned the seminary to become a monk at Mont Saint Michel. We thought we were parting as friends, but it was only that first night when we lay on our respective pillows, sobbing, that we realized we were in love. Within months, he had joined me in the States. A little nervous about what the future held, we also were eager to take on life’s challenges together. Except at the end, they turned out to be smooth.

In the early 1990s, when I was named head of the World Bank’s Regional Mission in Western Africa, we were the first same-sex couple assigned by a UN agency to a senior position overseas. Côte d’Ivoire was a better place for such an experiment than, say, Zimbabwe, but its success surprised even us. In fact, it hardly created a ripple, except for the occasional smile. One reason for this was that we were entirely relaxed and open about ourselves, setting others in turn at their ease; the other was that Jean Daniel had a quiet but compelling character that no one could resist or forget.

He died of ALS in December 2008, just two weeks after our 30th anniversary, but not before we had been able to declare our love formally and publicly. Taking advantage of Quebec’s new civil unions law, we celebrated our 25th anniversary at the Palais de Justice in Old Montreal in November 2003. It was one of the happiest days of our life. (In a similar ceremony the following year, we were the first Quebec couple to convert this into a full marriage.)

Why did this matter so much to us? Almost subconsciously, we had always accepted a degree of narrow-mindedness
and injustice in society and tried to be patient, understanding the depth and complexity of the prejudice modern civilization was trying to cast off. Sophisticated and self-confident, we saw little serious connection between our rights and larger causes. We were content to be ourselves, hoping that our cheerful level-headedness and example would contribute to broader progress. Yet, somewhere in the depths of our idealism, we were hurting badly, and a public marriage would be the perfect antidote and a celebration not just of our love but also of the progress society
was making.

The night of the big day, before going to bed, I put my wedding ring on the bedroom dresser. “Did your parents take theirs off at night?” Jean Daniel asked me. “I don’t know,” I answered wryly. “I was never with them at that hour.” “Well, if it means so little to you…” He walked over to the dresser, removed his own ring and placed it emphatically next to mine. This looked like being our first tiff as a married couple, so a few seconds later, I slunk out of bed and slipped the ring back on. After a respectable interval — perhaps a minute — Jean Daniel did the same. We never took them off again.