When the Concordia Stingers football team took the field against the Université de Sherbrooke Vert et Or at Concordia Stadium on September 4, fans witnessed something different: a new Stingers look, with fresh uniforms and a new logo. While the bee isn’t gone, the new yellow and burgundy “C” logo — complete with bee stripes and stinger — projects a stronger, sleeker image. 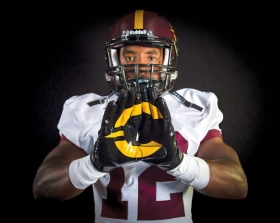 It’s a bold departure, one meant to help establish a culture of pride at the university, spearheaded by Concordia’s sports teams.

In the week leading to the September 4 game, the Department of Recreation and Athletics teased students, staff and fans with flyers, posters and videos on social media about the historic rebranding. And there is much more to come in the next few weeks.

“I’m pumped!” says Patrick Boivin, Concordia’s director of Recreation and Athletics, who kickstarted the rebranding project in 2014. “We don’t want to overwhelm people, so the soft rollout will continue during the next football games, and then when our basketball and hockey seasons start. Everything will be launched by Homecoming weekend, September 24-27.”

A survey of athletes indicated change was necessary. “They felt isolated on their own in individual team settings,” Boivin says. “The Stingers had been around for 40 years, and a lot of athletes didn’t feel an attachment to the brand and also questioned the relevance of the logo. When I started getting this feedback, I realized what the real story was: In sports marketing you have to revert back to engaging people and fans, especially those on the front lines — the athletes. To get back to that point, we had to figure out who we were and what we stood for, and that had never really been fundamentally researched and established.”

After securing approval from the university last year, Boivin reached out to four advertising agencies. “We ended up choosing Cossette because those involved at the agency had athletic backgrounds from various universities, including Concordia. They saw a creative opportunity that went beyond a logo change. They pitched a holistic approach that will breathe new life into the Concordia Stingers brand.”

Dare to be different 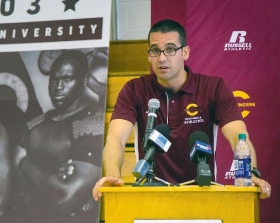 Patrick Boivin, Concordia’s director of Recreation and Athletics. The Stingers rebranding process included a team of students, who contributed a series of videos to help launch the new look.

For Cossette project manager Veronik Bastien, the Stingers rebranding is nothing less than monumental. “Concordia needed to define who the community is and assert itself. Together we are establishing a culture that did not exist before. It’s an enormous challenge,” Bastien says.

“What I have especially enjoyed with this project is Concordia has dared to be original,” she adds. “Clients can be very conservative, afraid of going into left field, of going into uncharted territory. But Concordia has had 100 per cent confidence in the direction of this project from the very beginning, and we have created a strategy that is unlike those of other universities in Quebec. We are creating a strong identity for the Concordia Stingers.”

Beyond the new emblems — some feature slight variations of the core “C” logo, a couple with a redesigned, tougher-looking bee — the rebranding has established what Boivin’s team calls the “five pillars” of Concordia’s sports program: passion, adversity, roots, the road and the hive. “Roots touches on the old Sir George Williams Georgians and Loyola Warriors sports teams; the road is the path an athlete journeys on to the field; and the hive is fan-focused, about fans creating hives,” Boivin explains.

This strategy coalesced following interviews in the summer of 2014 with university administrators, students, coaches, alumni and athletes. “I sat in on all the interviews and discovered that Concordia’s sports program had been pretty much on its own, separate from the rest of the university,” says Bastien. “Students in general were unfamiliar with the Stingers. Many had never gone to a Stingers football or hockey game. So we asked people from all over the university about Concordia’s strengths and weaknesses, and what inspired them.”

What they came up with were the “five pillars” that Cossette pitched to Boivin and his team, along with the new logo and bold marketing strategy. “There was a lot of collaboration, and they loved the first logo we presented to them,” Bastien says.

Recreation and Athletics then put out a call in March 2015 for students to get involved in the Stingers rebranding project. A wide diversity of applicants were pared down to a multidisciplinary team of 20 students led by award-winning photographer John Londono, BFA 11, who has worked with everybody from Adidas to Arcade Fire. “The students are assisting with videos for each pillar, and each video features Concordia athletes,” says Bastien. “It’s a very big project. Even though students are involved, this is a professional project.

The first video — Passion — was released on September 4. “I’m super excited because we are involving students in the project, notably from fine arts,” Londono says. “Just getting them and their friends involved in the launch will help bring a new awareness of the Stingers that did not exist before.”

Visit stingers.ca to watch the videos as they are released. 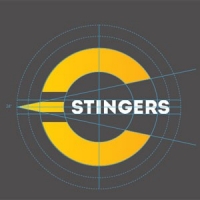 Over at Recreation and Athletics, communications assistant and rebranding project leader Liam Mahoney, BFA 13, has had a busy summer preparing for the launch and coordinating the schedules of team participants: “The students had summer jobs, so getting them all in the same room together was a challenge!”

With the Stingers’ new season underway, Boivin is thrilled with his team’s efforts and results. “You may have great content but it’s all about how you message,” he says. “This project was about getting up to the current times in our messaging and branding that targets our athletes and student population. If we’re showing a video and reaching out via social media, students will become more engaged.”

The rollout has now begun under the guidance of Cossette, which will remain on board until Recreation and Athletics fully takes the reins.

Boivin points out that, in addition to messaging via social media, posters and flyers, the Recreation and Athletics team is working hands-on with student associations at the start of the academic year, “during orientation and their frosh weeks, to offer them fun activities at Stingers games.”

The rebranding strategy aims to improve the fan experience at Stingers sporting events with various on-site activities, something Cossette says will help create a real emotional attachment to the brand.

Boivin says the Stingers experience is more than just about winning on the field: “First we want them to feel some school pride. We want students to have a good time regardless of what happens on the field of play.”

Meanwhile Mahoney, who played football for the Stingers from 2007 to 2010, is thrilled with the new logo. “I have an affection for the old Stingers logo because that’s what I grew up with and wore on my jersey, but it was definitely time for a change,” he says.

“Some alumni attached to the old Stingers logo may think this is too young, and I anticipate a transition period, which is natural. But we had to become more interesting — cooler — from an aesthetic standpoint,” says Mahoney. “I think the vision at Cossette is very Concordia, very Stingers, and for someone who has a lot of pride in the sports program, I think this launch is going to be a big success. This rebranding truly represents what the Stingers are, and this is the perfect time to do it.”