Fiery explosions, surging tidal waves, massive loss of life. And maybe a few zombies, too. It’s the stuff of action thrillers starring daring heroes and, for some of us, our worst fears for the end of this year. As 2012 comes to a close, some people are nervously watching the calendar creep ever closer to December 21. That’s the date some believe the ancient Mayan calendar predicts a colossal disaster and the end of the world.

Chances are, by the time this article is read, this prediction will be proven or disproved. If it’s the former, it will certainly be unfortunate for all humankind. However, given past apocalyptic forecasts, don’t bet on it.

That’s because this is not the first time the apocalypse has been called for, says Lorenzo DiTommaso, a professor and chair of Concordia’s Department of Religion and apocalypse expert. Recall the hysteria and fear surrounding the arrival of the past millennium — the so-called “Y2K” bug. When the clock struck midnight on January 1, 2000, and nothing catastrophic occurred, the world breathed a collective sigh of relief.

According to DiTommaso, we have been waiting for the apocalypse for a long time. 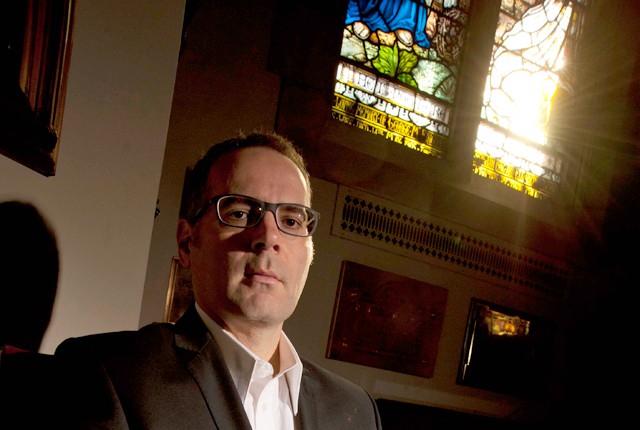 On October 3, he delivered a talk entitled “The Last Lecture? Apocalypse Then and Now” as part of Homecoming 2012. To a packed and enthralled audience, DiTommaso said that despite inaccurate predictions like Y2K, apocalyptic fears are still stoked by massive natural disasters such as the 2010 earthquake in Fukushima, Japan, that devastated a large swath of land and killed thousands of people. In order to make sense of these tragedies, we put events like these into a larger conceptual framework to understand the workings of the world and all the other things we can’t easily grasp, like the nature of time, space and death.

Since arriving at Concordia in 2004, DiTommaso has looked at apocalypses in all forms; on the bookshelves in his office, graphic novels and Japanese manga comics sit next to books on the Dead Sea Scrolls and medieval theological texts. He believes that one thing is common to all apocalyptic forecasting, from biblical and medieval prophecies to modern day interpretations: it’s not just the expectation for the end of the world, but a larger, apocalyptic world view. “Apocalypticism is the mortar that binds these devastating events together and creates a meaningful philosophic structure that is at once comprehensive, comprehensible and internally consistent,” he says.

The origins of The End

Throughout the ages, apocalypticism has varied in intensity. Dating back about 23 centuries, to the origins of the world view in early Judaism, DiTommaso says, “when we chart the frequency of apocalyptic speculation over these 2,000-plus years, we quickly notice that the trajectory displays more of a peakand-valley profile than a steady-state one.” One early peak was in the period from the second century BCE (before the Common Era) to the first century CE (Common Era). It was the period that the classical biblical apocalypses of Daniel and the Revelation to John were composed, along with dozens of lesser known apocalyptic texts such as The Book of the Watchers, The Animal Apocalypse and The War Scroll that were discovered among the Dead Sea Scrolls.

At the same time, there came a rise in messianism — a belief in a redemptive, end-time figure that will restore good to the world for all eternity. In the Christian tradition, this figure is Jesus, whose “second coming” is anticipated by believers.

In the Middle Ages, fears of a coming apocalypse recurred. In the sixteenth century, The Fifteen Signs of Doomsday was an immensely popular text. Among the signs: mountains flattening, sea levels rising, birds falling out of the sky and the dead emerging from their graves. Though at least three of these disasters sound remotely possible in our era of shaky plate tectonics, climate change and avian flu, DiTommaso is quick to note that in the context of apocalypticism they become “supernatural”— ascribed a value beyond human understanding.

Not all apocalypses foresee a supernatural doomsday scenario or the advent of a messianic saviour. These were two of the myths DiTommaso dispelled in his Homecoming lecture. Another was that all apocalypses are harbingers of the negative. For example, some interpret the 2012 Mayan prophecy as the coming of a new, positive age in which justice and salvation prevail, or that ushers in a new era of human consciousness.

Another major misconception about apocalypses surrounds the one we are currently anticipating: that the Maya believe the world will end on December 21. In fact, whereas the apocalyptic concept of time is linear — that is, it has a beginning and moves steadily in one direction — the Meso-American calendar that the Maya follow is cyclical. One of their cycles is called the Long Count, which lasts 5,126 years, and while the end of the Long Count occurs in 2012, the precise end date is disputed.

In the 1970s and ’80s, a group of cranks got hold of the Mayan calendar and imposed an apocalyptic valence on it. They unravelled its circular concept of time, making it linear. They also made assumptions, as the Maya did, based on the motion of the celestial bodies in the sky, although these assumptions presume certain planetary measurements. “The calendar’s accuracy was restricted to the precision of human observation,” DiTommaso says. “In other words, assume one measurement, get one date. Assume another, get another date.” December 21 is a common consensus, not a scientific fact.

In addition to the myths about apocalypticism, DiTommaso put forth five aspects that characterize it in all its forms.

The first is that our world is ordered by “two irreducible and mutually antagonistic forces, most often labelled as ‘good’ and ‘evil.’ ” The next is that in addition to our everyday existence, “there is a transcendental reality — the veritable one, to which our own world is subordinate and transient.” Most often, this divine reality is known as “god” or “heaven.” Indeed, DiTommaso explains that the term “apocalypse” comes from the Greek word apocálypsis, which means an “unveiling,” and by extension, “revelation.” In a sense, a transcendental reality is being unveiled. “It’s as though we have a curtain behind us, and there is another world behind it, whose reality is the true reality.”

Third, apocalypticism proposes that our world is so bad that the only way out is to restore it supernaturally — to sweep it away. Fourth, in this new world will be found justice, salvation, retribution and vindication, or whatever is felt to be missing now. Fifth, our primary task in this life is to uncover and understand the truths about space and time.

“Ultimately, we must prepare for the imminent dissolution of the present reality,” DiTommaso says. These factors amount to apocalypticism’s “tremendous conceptual scope and almost infinite applicability” and explain why it has endured for as long as it has.

One might think that with the triumph of the scientific world view — life-saving vaccines, gravity-defying airplanes and the rest — humankind would have shed the ancient apocalyptic mindset. Not so, DiTommaso reveals. Not only does apocalypticism persist, it thrives. “We live in the Age of the Apocalypse,” he says. It pervades popular culture, in comics, novels, music, role-playing games, and in Hollywood blockbusters like 2012 and Avatar, which depict apocalyptic or post-apocalyptic worlds and the massive devastation associated with it.

What distinguishes today’s apocalyptic beliefs from those of the past is their source: in our interconnected, secularized and globalized lives, we see many more predictions in the “bottomup” sense. Unlike earlier doomsday forecasts, which were driven by a reigning leader in a “top-down” manner, DiTommaso calls the 2012 Mayan prophecy “the first public apocalypse.” With the ubiquity of the internet, “apocalyptic conjecture can be instantaneously uploaded to freely accessible websites, blogs and social media.”

Our modern era has also seen the emergence of a new, secular apocalypticism not based in religious belief. DiTommaso, an atheist, refuses to ascribe any role to supernaturalism. “There’s a lot I don’t understand, but a supernatural explanation doesn’t help me understand it,” he says.

DiTommaso believes in a different kind of apocalypse that is already taking place before our very eyes. In his view, environmental degradation is a more serious concern and we will see widespread loss of biodiversity and mass extinctions before we see a sudden, supernatural catastrophe described by people claiming to be prophets. DiTommaso may not
practise in the religious sense, yet he practises what he preaches in the secular sense: he and his wife Diane are vegans and environmentalists, doing their part to prevent what he calls the real apocalypse.

“Apocalypticism is an adolescent world view. It understands the world in terms of black and white and assumes that history — and its end — is governed by a supernatural agency. In this way, it places responsibility for the future on someone or something else than ourselves. It is time to grow up,” he says.

Concordia geography, planning and environment professor and climate science expert Damon Matthews agrees that time is running out, but he is more optimistic than DiTommaso. Matthews hesitates to use the word “apocalypse” to describe our current status. “It depends on how long we continue on this road. If we continue emitting greenhouse gases for another century, the impact could be apocalyptic.” He describes some of the consequences of unchecked emissions:  dramatic sea-level rise, crazy weather and the collapse of the agricultural system. “Climate change is not reversible.”

Matthews describes another scenario that could portend disaster: geoengineering schemes to stimulate technological fixes for climate change. For example, some scientists are proposing dumping iron sulfate into the oceans to sequester carbon dioxide. Matthews can imagine all sorts of ways in which large-scale projects can malfunction, both in climate impacts and
negative side effects.

Yet Matthews agrees with DiTommaso in that we have transferred responsibility for the planet to our heirs: “We’re downloading problems onto future generations and have been for decades.”

Even if the coming of December 21 doesn’t make one nervous, observing the excitement of others can be entertaining. Just don’t try to talk the soothsayers out of their beliefs.

How would DiTommaso respond to an ardent apocalypse believer? One option, he says, would be to reflect on the thousands of apocalyptic doomsdays that have been predicted over the past 22 centuries.“One hundred per cent of these prophecies have failed. There’s not even one success.” Yet just because something has never occurred before doesn’t negate the possibility it will occur in the future. Perhaps the next doomsday prediction will be the one that comes to pass. Prospectively,
DiTommaso says, “Since that proposition is falsifiable, I’d say let’s wait and see.” But he isn’t holding his breath.