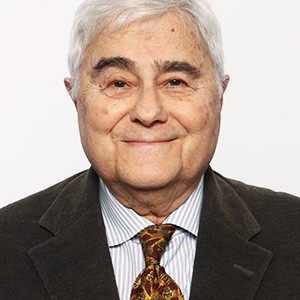 Aaron Max Fish — inventor of the push-button lock design, and a dedicated Concordia community member — passed away on October 1, 2020. He was 88.

A 2016 honorary degree recipient from Concordia, Fish was recognized as an innovator, a global authority in the field of lock design, and a long-time supporter of the university’s next generation of engineers.

“Our community is saddened by the passing of Aaron Fish, who was a friend of Concordia and higher education,” says Paul Chesser, BA 94, GrDip 97, vice-president of Advancement. “Aaron’s generosity helped students pursue their studies and reach their goals.”

In 1999, Fish established and donated funds to the Aaron M. Fish Scholarship of Excellence in Mechanical Engineering. He had a keen interest in meeting his scholarship recipients and in recent years invited mechanical engineering students to tour the Aaron M. Fish Lock Museum and his Capitol Industries Ltd. factory.

“I met Aaron Fish after he had retired but he was still full of vigour and passion for the business of locks and lock machinery and their design and manufacture,” said Martin Pugh, chair, Department of Mechanical Industrial and Aerospace Engineering of the Gina Cody School Engineering and Computer Science.

“For the past few years, he welcomed groups of our eager and curious students into his Lock Museum and his factory to see how locks have been designed over the centuries and how they are still made today. He was always happy to see us arrive and was thrilled to see young people learning about the skill and tradecraft of locks and their manufacture.”

A native Montrealer, Fish started cutting keys when we was eight years old. His father was a locksmith.

“By the time we finished 11th grade, most of the boys in our class knew what they were going to do,” Fish once recalled. “My dream was to go to MIT for mechanical and electrical engineering, but I didn't have the marks. I could have overcome that obstacle, but by the end of the summer my mother told me, ‘If you want to eat, you had better go to work!’”

At the age of 17, Fish started his own business with $20 and a bicycle, pedaling key blanks on Saint Laurent Boulevard.

In 1965, he founded Unican Security Systems Ltd., where he engineered and developed the very first push-button lock for Bell Canada.

Unican quickly became an international leader in security products, as the largest maker of key blanks and duplication machines in the world.

His innovation and success would affect a major change in the key and lock industry in North America, Europe, South America and Asia.

His lock design was adopted by the Pentagon — headquarters of the Unites States Department of Defense — as well as the United Nations building in New York City and the Industrial Bank of China, among other high-security facilities.

By 1999, Montreal-based Unican and its subsidiaries and affiliates boasted a staff of 3,700 employees and worldwide sales over $450 million. The company sold 4.5 million keys per day.

Fish sold Unican to Swiss conglomerate Kaba Group. He bought back the company in 2007 and renamed it Capital Industries Ltd.

In March 2010, Fish was recognized with a Concordia Alumni Honorary Life Membership for his business achievements, his authority in lock design, and for his dedication to philanthropy.

In 2012, Fish authored the book Under Lock & Key, The Unican Story, where he shared his business success and life story.

As founder of the Wally and Aaron Fish Family Foundation, he and his wife supported numerous other causes and charities, including the Jewish Community Foundation of Montreal and the Montreal Children’s Hospital.

He also helped establish the Aaron Fish Chair in Mechanical Engineering – Fracture Mechanics, at Ben-Gurion University of the Negev, Israel.

Fish earned a Lifetime of Outstanding Achievement Award from the Associated Locksmiths of America and the Entrepreneur of the Year award from the Government of Quebec, the Bank of Montreal and several investment firms.