‘Put in the hours’: family commitment to education inspires $100,000 gift to JMSB 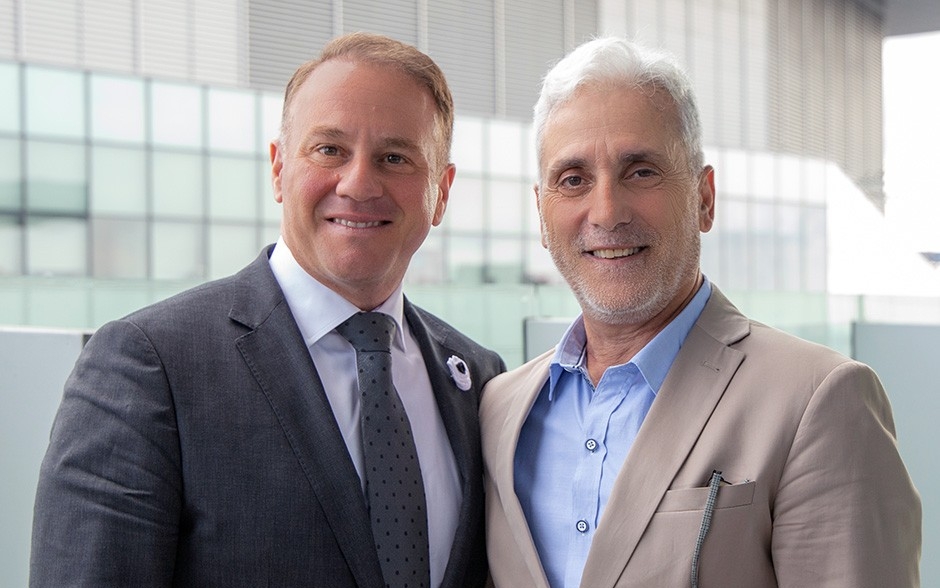 When Peter Pomponio, BComm 90 (finance), recently donated $100,000 to support undergraduate scholarships at the John Molson School of Business, global markets — a sector the owner and president of Assante Dorval closely follows — had yet to reel from the unrest provoked by the COVID-19 pandemic.

As a result, questions about the gift to Concordia momentarily gave way to more urgent concerns after the quarantined, but otherwise healthy, Pomponio was contacted at his home.

“It’s sort of business as usual, to be honest,” responded the wealth management advisor, when asked how the coronavirus had affected Assante, recently named one of the most trusted investment firms in Canada. “Obviously, clients who need to draw from portfolios for income are more vulnerable, but we have a strategy to cushion them in times of crisis. We’re well positioned because we’re conservative investors who plan for the long term.”

Pomponio, who also serves as the managing director of Assante Quebec, expressed grave concerns about the human impact of the pandemic but urged anyone troubled by market turbulence to keep a sense of perspective.

“Remember, we’ve lived through worse than the Great Depression. The market correction of 2008 and 2009 was worse than 1929. And we bounced back after three years. These big drops in the stock market, there’s no rational basis for them. So it’s important to remain focused. There’s going to be significant spending by governments to bolster the economy.”

The ability to perform this kind of measured, big-picture analysis — a skill that has helped propel Pomponio to the top of his profession — was encouraged by supportive parents and honed at Concordia.

“My parents were the type to attend all of my conferences at school,” said Pomponio. “There was very little tolerance for failure. There was a pressure on me to succeed, no doubt. They had the approach that if you’re going to take on a project, you had better put your whole self into it and be the best you can be. ‘Put in the hours’ — that’s what my dad used to say.”

‘Concordia was a period of immense maturity’

By the age of 16, Pomponio had set his mind on finance as a career. He absorbed business news and stock quotes and even invested some of his own pocket money. When he enrolled at Concordia, he was primed to take his passion to another level.

“Not only did I enjoy my time at Concordia but it was a period of immense maturity. I started to see the world in a different way and got to interact with adults — both students and professors — who had day jobs. This motivated me and accelerated my growth and knowledge of the business world.”

Pomponio was hired by an accounting firm after graduating with his BComm in 1990 but soon made the pivot to financial planning at Assante’s corporate predecessor. He’s been with the company for almost three decades now and has earned a sterling reputation in investment and wealth management circles.

With his generous gift of $100,000 to support finance students at JMSB, Pomponio wants to pay it forward. The decision to give back was not his alone.

“Joseph Capano [Principal Director of Development, John Molson School of Business] facilitated a tour of John Molson for myself and my family. We were very, very impressed by what we saw. Education is so important to us, especially now.”

Pomponio and his wife, Giulia, have three children at various stages of their education. Eldest daughter Christina, 24, intends to become a pharmacist and is “living her dream” as a student at the Massachusetts College of Pharmacy and Health Sciences in Boston. Kayla, 21, is about to enter law school, while Nicholas, 16, attends Loyola High School, located across from Concordia’s Loyola Campus.

Even the best talent struggles to blossom without adequate resources, Pomponio suggested, as he discussed his children’s accomplishments and good fortune. This sentiment is what ultimately prompted the family to propose the bursary and scholarship endowment to JMSB.

“The youth of this world — and a lot of it has to do with technology and the way they think about things — are critical to the evolution of business,” said Pomponio. “I want to fuel that as much as I can. It makes sense to start locally, with my alma mater, at Concordia. There are good things going on here. Hopefully, this is just the beginning.”