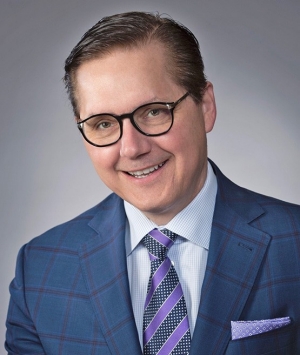 Tony Loffreda wants to focus on promoting youth engagement during his tenure as senator.

Concordia grad and member of the university’s Board of Governors, Tony Loffreda, BComm 85, has been appointed to the Senate of Canada by Prime Minister Justin Trudeau. He will represent the province of Quebec.

“I am happy to welcome Tony Loffreda as Parliament’s newest independent Senator,” said Trudeau in a statement. “His dedicated service to his community and province, along with his extensive experience on various boards and committees, makes him a great choice to represent the people of Quebec.”

A certified public accountant, Loffreda spent the last 15 years with the Royal Bank of Canada (RBC), most recently as vice-chairman of Wealth Management. He is set to retire from RBC on August 30, and will take up his new role in Ottawa in September. We spoke with Loffreda to discuss his new appointment.

This is a big change for you in terms of your career. Can you talk about what you’re feeling being appointed to the senate?

Tony Loffreda: I'm honoured to be selected by the prime minister and appointed by the governor general to serve in the Senate. The Senate is a dream for me – one that I never expected. I grew up in Ahuntsic. I had modest, humble, hard-working parents. I remember on Sunday nights we would get around the table and we would count the money for the week. My dad would say, “Help me count it. Can we make ends meet this week?” That’s where I come from. I’m very proud of my parents. They did make ends meet. They surpassed my expectations and they were great people.

What inspired you to decide to leave a lucrative career in banking to become a Senator?

TL: With RBC, it’s been a great ride for 15 years as a senior executive. I could not have written it better myself. But at this point, I want to help Canada. I feel it’s time to give back. I never get as much of a high as when I help with a great cause. That’s when you realise it’s not just about numbers, it’s not just about helping clients thrive – it’s about helping communities prosper. As a Senator, I feel I can help communities prosper for years to come.

What do you hope to accomplish as a Senator?

TL: It’s early in the process, but I’d like my contribution to the Senate to reflect my last 35 years of work and to keep helping our communities prosper – always with integrity, honesty and hard work.

I think youth is important. I want to help youth to really prosper to help this country move forward. The future of this country depends on it. This is why I’ve been involved at Concordia with the John Molson Undergraduate Case Competition, where you can share your experience and pass it on to the youth. There, you get to be a mentor and guide them along to make sure that they’re making the right decisions at the right time.

I want to focus on getting youth engaged across the country, engaged in what’s going on and engaged in politics. I want to leave this country in great hands. At RBC, we always looked at developing our youth and developing who’s behind us. I want to keep doing that. This is what I would want if I had one legacy to leave behind.

Speaking of youth, what advice would you pass on to the next generation of Concordia students and young alumni?

TL: It’s about learning, listening and improving. Every day, I make a little list of how many mistakes I made that day or where could I have been a bit better. I’m always looking to improve. You can never be satisfied with what you’ve done – you can always do a little bit more. You have to have the confidence to say, “Okay, I could’ve been better here in a, b or c.” Don’t take every element of criticism negatively – learn from it.

I recommend getting coaching from your circle and asking for areas where you could improve.

There are four elements that I think are important for working in a corporation. First, you have to have a vision. For exampIe, “I want to double my sales. I want to be a leader.” Then you have the strategy as to how are you’re going to do it. Third, you have to have values. Integrity is not negotiable. And fourth – this is an area a lot of people are missing – you need a purpose. Why do you have that vision? Why do you want to double your sales? If you work in pharmaceuticals, don’t tell people “Let’s sell 10 million pills.” I would say “Let’s save thousands of lives.”

Is there anything you’d like to add that we haven’t covered?

TL: I’d like to thank so many people and there are so many names that I could mention, but I want to thank Concordia. Concordia has been a big part of my life and it’s a great university and I’m very grateful for it. So thank you to Concordia for all it has done for me and the education I received.