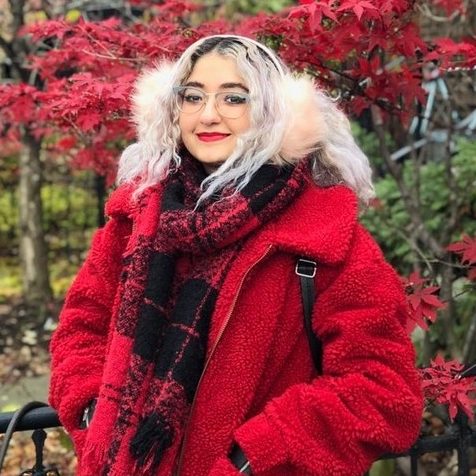 Zeynep Kartal is a graduate student in Film Studies at Concordia University’s Mel Hoppenheim School of Cinema. Zeynep graduated from McGill University with a BA Honours in English (Cultural Studies stream), and a minor in Gender Studies. Her undergraduate thesis, “Haunted Text(iles): Sapphic Spectrality, Seriality, and Spectatorship in Killing Eve” traces the history of spectral and sartorial expressions of lesbianism in film and TV, all the way back to Sappho’s poems which she reveals as haunting these representations. Zeynep’s work has been published in NECSUS, European Journal of Media Studies.

Zeynep grew up in Turkey and moved to the US when she was 15 after receiving a scholarship to study at a boarding school. She then finished high school in Nova Scotia before coming to Montreal. Having done interdisciplinary research in literature, cultural studies, and film and TV, Zeynep is delighted to pursue her research on lesbian representations in Film Studies at Concordia. An aspiring writer and filmmaker, she is also an Executive member for the Graduate Film Studies Student Association, and Copy-Editing Manager for the journal Synoptique.