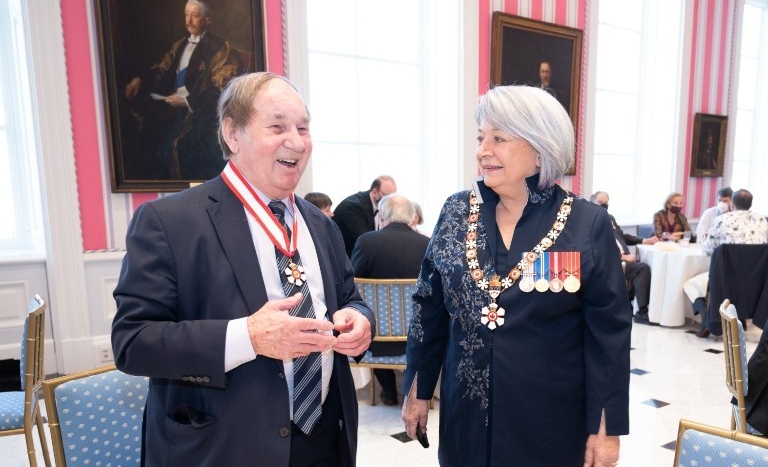 During the National Order of Quebec ceremony in June, lawyer James O’Reilly, BA 60, could be seen — but not heard — bantering with François Legault as he received the insignia.

The Quebec premier had just paid a tribute to O’Reilly for his longstanding defense of Indigenous rights, singling out the “revolutionary” land-claim treaty he helped negotiate in the 1970s for the Cree and Inuit, after a legal battle against the province and Hydro-Québec. What could O’Reilly have been joking about?

“I said, ‘We’re still fighting Hydro-Québec!’” O’Reilly recalls with a smile, speaking from his downtown Montreal office. His firm currently represents the Innu in three lawsuits against the power utility.

That’s telling of the pugnacious lawyer, who, in his early 80s is, in his own words, “past retirement.”  These days, he’s allowing himself to come to the office later — but he’s often the last one to leave.

“When you’re absorbed in a topic, it’s stronger than you,” says the graduate of Loyola College — one of Concordia’s two founding institutions — where he particularly enjoyed history and philosophy classes before going on to earn his law degree at McGill University.

“Absorbed” is a euphemism in O’Reilly’s case. More than five decades waging legal battles alongside First Nations across the country, including several times before the Supreme Court of Canada, have established him as an authority on Indigenous law.

“In the office, we still have all the documents he wrote in the 1960s, 1970s,” says Geneviève Nevin, a law student interning with O’Reilly. “If you ask him what happened, he knows all the history, all the background: he’s better than Google!” 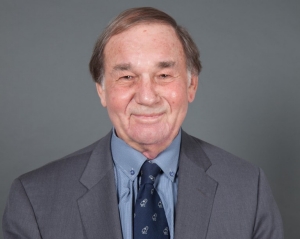 “When you’re absorbed in a topic, it’s stronger than you,” says James O’Reilly. | Photo: Sun Knudsen

Determined to make a difference

Born and raised in Montreal by an Irish-policeman father and a Quebecois-schoolteacher mother, O’Reilly’s earliest contacts with Indigenous Peoples were his friendships with Mohawk junior hockey teammates. And he never forgot the grim living conditions of the Innu community he witnessed near Schefferville, in Northeast Quebec, where he spent several summers as a student working for an exploration company.

The opportunity came early in his career, when O’Reilly was starting out at Martineau Walker (later Fasken Martineau), cutting his teeth on succession and real-estate law. To this day, he’s not sure who recommended him to Kahnawake Chief Andrew Delisle, who was seeking a lawyer on a St. Lawrence Seaway expropriation case and called him out of nowhere.

This was the 1960s, and the early days of Indigenous activism to get historical rights recognized. O’Reilly ended up doing more work with Delisle, a founding member of the National Indian Council and of the Indians of Quebec Association. As they toured communities to list their claims, the young lawyer built up knowledge of Indigenous law, which few of his peers had then done.

It’s that rare expertise that convinced him to challenge the hydroelectric dams Quebec planned to build in the James Bay area. The Cree and Inuit, who hadn’t been consulted on the massive project, feared it would destroy their environment and threaten their survival. In 1972, O’Reilly left Martineau Walker, which was by then representing the James Bay Development Corporation, took the case, and co-founded a firm.

“I didn’t feel like I had much choice,” he said of his life changing decision. “I couldn’t have lived with myself if I hadn’t tried.”

The legal challenges, including a short win to halt the construction of the project, were epic and followed by tense negotiations. But the resulting settlement, known as the James Bay and Northern Quebec Agreement, was a seminal treaty that acknowledged specific rights of the communities on the land, and paved the way for more pacts.

O’Reilly went on to work alongside First Nations from Newfoundland to Alberta, where he sat across from the federal government in oil and gas disputes. As one of the representatives of the Mohawk Nation, he also became one of the voices of the 1990 Oka crisis.

O’Reilly, who remembers fondly his days on the Loyola College hockey team, won many accolades during his career, including from the Samson Cree Nation of Alberta that named him honorary chief. But when he found out about his nomination to the Order of Canada, three years ago, he hesitated.

“I fought against Canada my whole life. Was I betraying my principles?” he asks.

The answer came from the Cree leaders he consulted. “They said ‘It’s the enemy, but the enemy respects us, so why not?’ So I accepted."