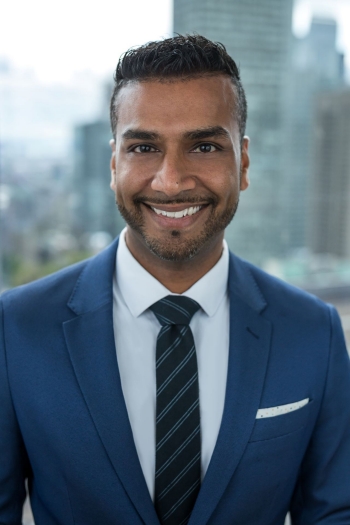 When a tsunami struck Sri Lanka on December 26, 2004, Ian Selvarajah, BComm 07, watched the devastation unfold on television and knew he had to be there to offer support.

“There was something in me then that told me this is a once-in-a-lifetime opportunity to help out,” he says.

Then an undergraduate student at the John Molson School of Business, Selvarajah developed his ideas for relief efforts into a project for his work term through Concordia’s Insitute for Co-operative Education. Soon, he was travelling to some of Sri Lanka’s most devastated areas, implementing projects while remotely raising funds in Canada. Within six months, his efforts helped rebuild a church, buy new fishing boats and launch a small microfinance program for local businesses.

“Staff at Concordia really stepped up. They saw this as something unique and wanted to support the initiative,” Selvarajah says, and adds that support from the university helped him build skills early in his career to transform large and small organizations across the globe.

“I’ve been able to apply my skills — regardless of what it is I'm doing — by being able to see the big picture and think creatively to solve complex problems,” he says.

Opening doors for others

“What drives me is having new experiences, pushing limits and opening doors for others. If someone like me can do it, so can you,” he says.

Selvarajah is himself no stranger to adversity. His family escaped Sri Lanka’s civil war when he was a child, arriving in Canada with little more than a small suitcase and the clothes on their backs.

“Growing up, I went to church with my family, so we were regularly coached on generosity and giving to those who are less fortunate,” he says.

While studying at Concordia, Selvarajah says he built on computer programming and IT skills with project management, critical thinking and business process analysis that prepared him to be an innovative entrepreneur. He adds that Meral Büyükkurt, a professor in the Department of Supply Chain and Business Technology Management, had a particularly significant influence on his career that continues to this day.

“She was absolutely instrumental in giving me career advice, and she's still a mentor of mine,” he says.

Selvarajah, now a senior manager in technology consulting at EY in Montreal, has had a diverse career that includes contracts in the manufacturing, banking and retail industries, among others, as well as positions in Asia, Europe and Latin America.

“Throughout my — sometimes seemingly random — career, understanding technology and combining that with business processes has always been the centre line,” he says. “Because technology is so conceptual, it can apply in different situations, countries or industries.”

Selvarajah uses these same skills in his philanthropic work, which has included teaching social entrepreneurship in Nepal and strengthening the Haitian Ministry of Health’s IT system with the Clinton Foundation.

“Business technology management is a mindset for approaching problems, using technology and innovation to make the world better,” he says.

Setting up for success

Most recently, Selvarajah founded a charity called Someone Like Me to promote diversity in leadership roles. Inspired in part by his own experience seeing few BIPOC individuals in senior corporate leadership roles, the initiative provides mentorship to Concordia bursary recipients in addition to financial support.

“It's great that companies have diversity and inclusion initiatives, but I felt that it was a little too late in the game,” he says. “One of my specialties is supply-chain management, so I have to understand and optimize the path from point A to B. I worked my way back through my own career path to see where I could have the greatest impact and decided on university and CEGEP programs.

“Mentorship combined with financial support will set these individuals up for success before they walk through the door of their first job.”