Françoise Bertrand named to the Order of Montreal 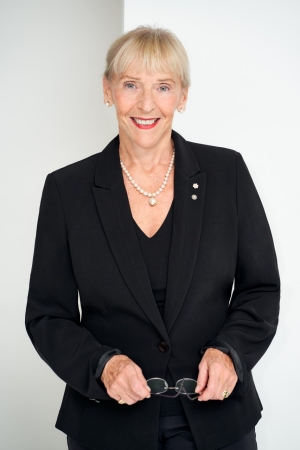 A trailblazing businesswoman and philanthropist whose career has been marked by a number of firsts was recently named to the Order of Montreal.

Françoise Bertrand, LLD 13, Montreal vice-chair of the Campaign for Concordia: Next-Gen. Now, was the first woman to serve as president and CEO of various organizations, including the Fédération des chambres de commerce du Québec, the Canadian Radio-Television and Telecommunications Commission, and Tele-Québec.

Bertrand is now the first woman to chair the board of directors at VIA Rail Canada, a position she’s held since 2017.

Bertrand attributes her professional success to dedicated mentors, collaborative colleagues and, most importantly, higher education — a value her parents taught their three children from an early age.

“My parents really insisted that the first thing for us would be education. My maternal grandmother espoused that same principle,” says Bertrand. “University was not to be negotiated. It was important in life to be equipped, to develop yourself and your abilities. Today, if you want to make a difference, it starts there. Education, for me, is paramount.”

Throughout a career that spans more than 40 years, Bertrand has been a committed supporter of many causes and organizations, including the CHUM (Centre hospitalier de l'Université de Montréal) Foundation and the Segal Centre for Performing Arts, where she is a member of the board of directors. Her appointment to the 2020 Order of Montreal recognizes her contributions to her city and community. Bertrand was also named to France’s Legion of Honour in 2001, the National Order of Quebec in 2008 and the Order of Canada in 2013.

“Each recognition is like a flower that adds to a bouquet I’ve been cultivating along my career,” says Bertrand. While each is tremendously meaningful and representative of her widespread impact, Bertrand’s most valued reward is the deep bond she shares with her daughter Julie, and Julie’s family.

“Motherhood has always been at the centre of my life,” she says. “The most important reward is my daughter — to see who she has become and the love we cherish and nourish every day.”

In 2013, Concordia honoured Bertrand’s outstanding achievements in both the public and private sectors by presenting her with a Doctor of Laws. Her affiliation to the university grew deeper in 2015 when she became actively involved, drawn by Concordia’s commitment to innovation, creativity, diversity and inclusion. It’s where she says she feels at home, and is grateful to Alan Shepard, former president and vice-chancellor, for engaging her with the university.

Bertrand continues to pave the way for the next generation of leaders and encourages students, whose career and personal trajectories may yet be defined, to cultivate their passions.

“Start by identifying who you are. Test out what you like, what you’re good at, then develop it,” she says. “Give yourself a chance and find what is really burning within you. If it burns enough, you’ll make the best out of it.”