Ted Little, professor and chair of the Department of Theatre, who retired this summer after 19 years at Concordia, has made his mark on more than the university.

“He’s leaving a hole, but he’s also been a tremendous builder,” says Steven High, professor in the Department of History, referring to Little’s work in the theatre department, the greater community and as a university-wide leader. 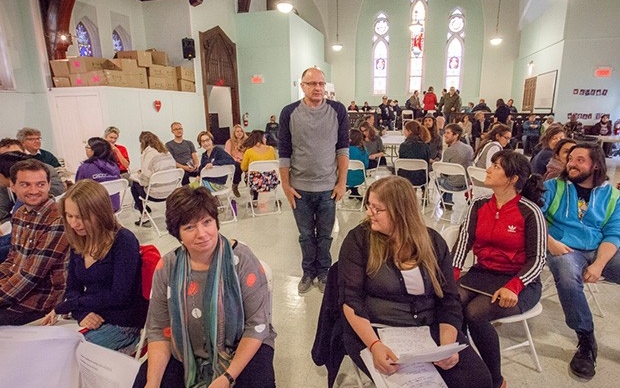 Ted Little, who is retiring after 19 years as a professor in Concordia’s Department of Theatre, was an essential figure in the Right to the City project. “There remains a commitment to working with community organizations, in neighbourhoods and on site,” he says.

“A large part of what I’ve done was really about breaking barriers, making the university walls more porous, getting our students out into the community and getting the community into our spaces,” says Little.

“It’s been an incredible privilege to work in an atmosphere where there are so many bright and engaged minds, and it will be hard to replicate that.”

As Little moves on — back to his native British Columbia where he will be designing and building a sustainable home on Vancouver Island — two very different awards will mark the culmination of his academic career.

“Ted is an extremely generous person who has given a lot to the university but also to Montreal as a whole,” High says. High and Cynthia Hammond, associate professor in the Department of Art History, nominated Little for the Office of Community Engagement’s Engaged Scholar Award.

Little won the prize, presented annually by Concordia’s Office of Community Engagement and the Office of the Provost to recognize a faculty member, student and community partner for their exemplary participation in community-engaged scholarship during the preceding year.

One way Little has shown his dedication and interest in the greater community is through his 17-year role as associate artistic director of Teesri Duniya Theatre, a creative force for socially and politically relevant performance in Montreal.

Through Teesri Duniya Theatre, Little worked with new and older Canadians, often bringing them into the university space.

He directed community-based projects and brought in artists to speak to his Concordia classes. Students worked as interns for the theatre, gaining arts administration experience.

At the same time, he was editor-in-chief of alt.theatre: cultural diversity and the stage, which examines intersections between cultural plurality, politics and the stage. Founded by Teesri Duniya Theatre, the journal gave Little another venue to make connections between the theatre and academic worlds.

A prize to call his own

To honour Littles’s lifetime commitment to community-engaged work, High teamed up with the Office of Community Engagement and Advancement and Alumni Relations to establish a prize in his name through Concordia’s annual Community Campaign.

The (Ted) Little Prize for Community-Based Oral History Performance and Creation will be presented annually to a community-affiliated researcher or artist who is engaged with Concordia’s 11-year-old Centre for Oral History and Digital Storytelling, where Little served on the board for years. It will be funded by contributions from Little’s colleagues, former students and friends.

“Community engaged work is a two-way street,” says High. “It’s important to find pathways into the university for people in the community, and this prize really does that.”

Getting students into the community

Little was a core member of the Right to the City, a three-year pilot project that brought students from theatre, history, art history and communications into place-based learning environments in the nearby neighbourhood of Pointe-Saint-Charles.

“Grounding this interdisciplinary work in the community has been so rewarding,” says Little. 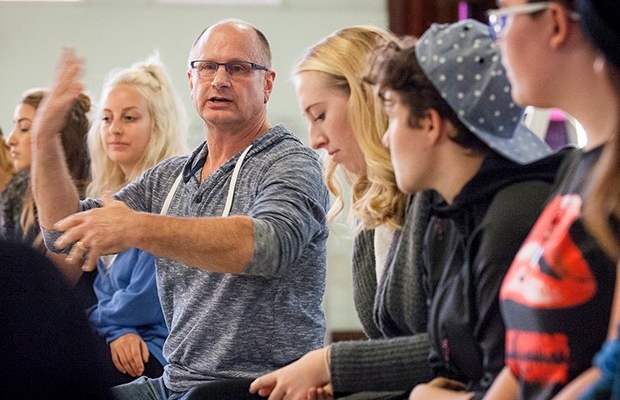 “I’m hugely thrilled and humbled by the initiative,” says Ted Little about the (Ted) Little Prize for Community-Based Oral History Performance and Creation and its reflection of his legacy of community engagement. | Photo: David Ward

“It’s a lift when you see your art and teaching have meaning beyond your own field. We see things through other lenses, and that makes the work broader and connects it with a wider range of people.”

Little will return to Montreal in fall 2017 for a meeting where university participants and the community will explore the impact of Right to the City, and figure where next to take the model.

“There remains a commitment to working with community organizations, in neighbourhoods and on site,” he says.

Through courses like the Artist-in-Residence, which Little taught, students will continue to work in the community as embedded artists with local organizations like the Atwater Library or Share the Warmth.

The relatively new Specialization in Performance Creation recognizes that artistic roles are no longer strictly delineated.

“Students are learning how to work with each other and developing the ethical sensibility that’s necessary when you’re working with the stories of others,” says Little, who played a key role in establishing the specialization.

“The department is poised to do some really good work,” he adds. “The art scene is changing, and our connection to the community keeps us on top of those changes.”

Watch for Going Public: The Art of Participatory Practice, co-authored by Ted Little, Steven High and Elizabeth Miller, professor in the Department of Communication Studies, out at the end of 2017.

To donate to the (Ted) Little Prize for Community-Based Oral History Performance and Creation, visit Concordia.ca/givenow, or contact us at giving@concordia.ca or 514-848-2424, ext. 5427