‘My aim is to understand more about those who wrote, published and read photographically illustrated travelogues’
|
By Leslie Goldstein 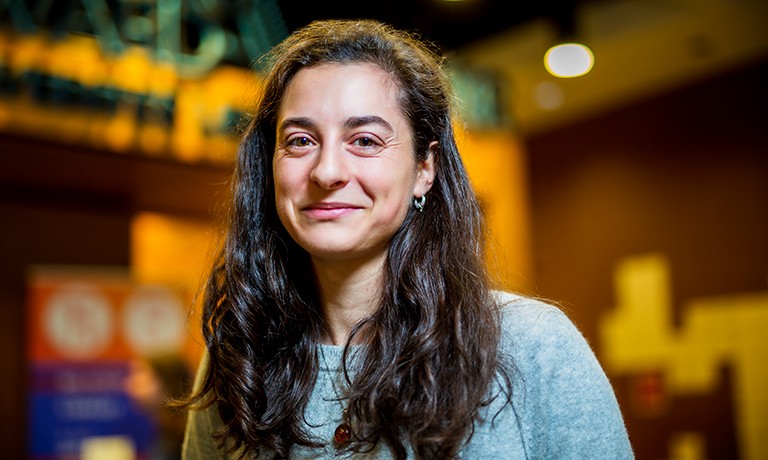 Stéphanie Hornstein: “An important part of my project will be considering how text and image mutually influence each other between the covers of travel books.”

Concordia Library is welcoming its latest researcher-in-residence this fall for one year.

Stéphanie Hornstein, BFA 15, earned a master’s at the University of Edinburgh in Scotland and is currently a course instructor and PhD candidate in Concordia’s Department of Art History. She is also coordinating editor for a book series organized by the research group Formes actuelles de l’expérience photographique.

Hornstein’s doctoral research is concerned with tracing patterns in 19th- and early 20th-century travel photographs of the broad region designated by Westerners as the “Orient.” Her particular focus is on themes that are common to photographic representations of Japan and Egypt.

As researcher-in-residence for the 2022-23 academic year, Hornstein has embarked on her research project, “Journey Through the Stacks: The Shelf-Life of Photographically Illustrated Travelogues, 1880-1930.” She will examine the library’s illustrated travelogues from the circulating collection and then begin a qualitative study of representative examples to understand more about those who wrote, published and read photographically illustrated travelogues.

‘A tremendous opportunity to stretch my intellectual capacities’

What inspired your research interests?

Stéphanie Hornstein: My first foray into the topic of travel photography occurred during my master’s while I was completing a research project at the Edinburgh Central Library. This public library has in its collection a set of hand-tinted photographs of Japan produced in the late 19th century.

Having never been to Japan myself, I was captivated by the striking quality of these images and the romantic world they seemed to promise. The more I researched the topic, however, the more I realized just how much these photographs were the product of an Orientalist imaginary. They revealed far more about their producers and consumers than about Japan itself.

What are some common themes that you have found across photographic representations of Japan and Egypt?

SH: When I began my PhD, I expanded the scope of my research to include depictions of Egypt. I chose it as a point of comparison for Japan because, even though the countries are very different from each other, I noticed they were apprehended by Western audiences in a similar way through the photographic medium.

For example, when large monuments are pictured, photographers often include a human figure for scale and this person is almost always a native inhabitant. While this might seem to be an innocuous detail, this convention reasserts imperialist assumptions of superiority over “Oriental” subjects.

Other themes common to representations of Egypt and Japan include taxonomies of occupations, by which people were categorized into “types,” and photographs of marketplaces that emphasize the pleasures of shopping in exotic locales.

Will your project on the library’s illustrated travelogues also look at these themes?

SH: Yes, I will be attending to the photographic images printed in illustrated travelogues that discuss Japan, Egypt as well as other Middle Eastern and Asian countries. An important part of my project will be considering how text and image mutually influence each other between the covers of travel books. I am particularly interested in how these publications contributed to what Edward Said (author of the 1978 book Orientalism) called “imaginative geographies,” which he describes as projections of place that are inflected by cultural bias.

I have chosen to concentrate on books published between 1880 and 1930, which represent the first flurry of books through which photographic illustration was democratized thanks to major advances in printing technology.

What do you hope to discover about the photographs in the library’s illustrated travelogues?

For example, I will pay close attention to how images are framed by captions, arranged on the page, announced by frontispieces and whether they are credited to their makers. This form of in-depth investigation will help reveal exactly how the photograph operated as an increasingly salient feature of the travel account.

What attracted you to Concordia Library’s researcher-in-residence program?

SH: The position offers an emerging scholar like me a tremendous opportunity to stretch my intellectual capacities beyond the writing of my doctoral thesis. At this juncture in the completion of my degree, I was eager to immerse myself in the physicality of primary sources.

Being based in the library also allows me to engage in very fruitful conversations with staff who have already contributed to my thinking in multifaceted and unexpected ways.

As a long-time user of Concordia’s library services, I was very curious to learn more about the backstage work that supports and enriches all the incredible research that students and faculty are producing.

Find out more about Concordia Library’s researcher-in-residence program and connect with Stéphanie Hornstein at stephanie.hornstein@concordia.ca.