The Art History Vitrine hosts month-long exhibitions dedicated to the public expression of art historical research, methods, and objects of study. Since 2006, professors and graduate students have curated installations in this display cabinet on themes as varied as Canadiana, print culture, postcards, as well as architectural drawings and models, often using original works of art by Concordia students. 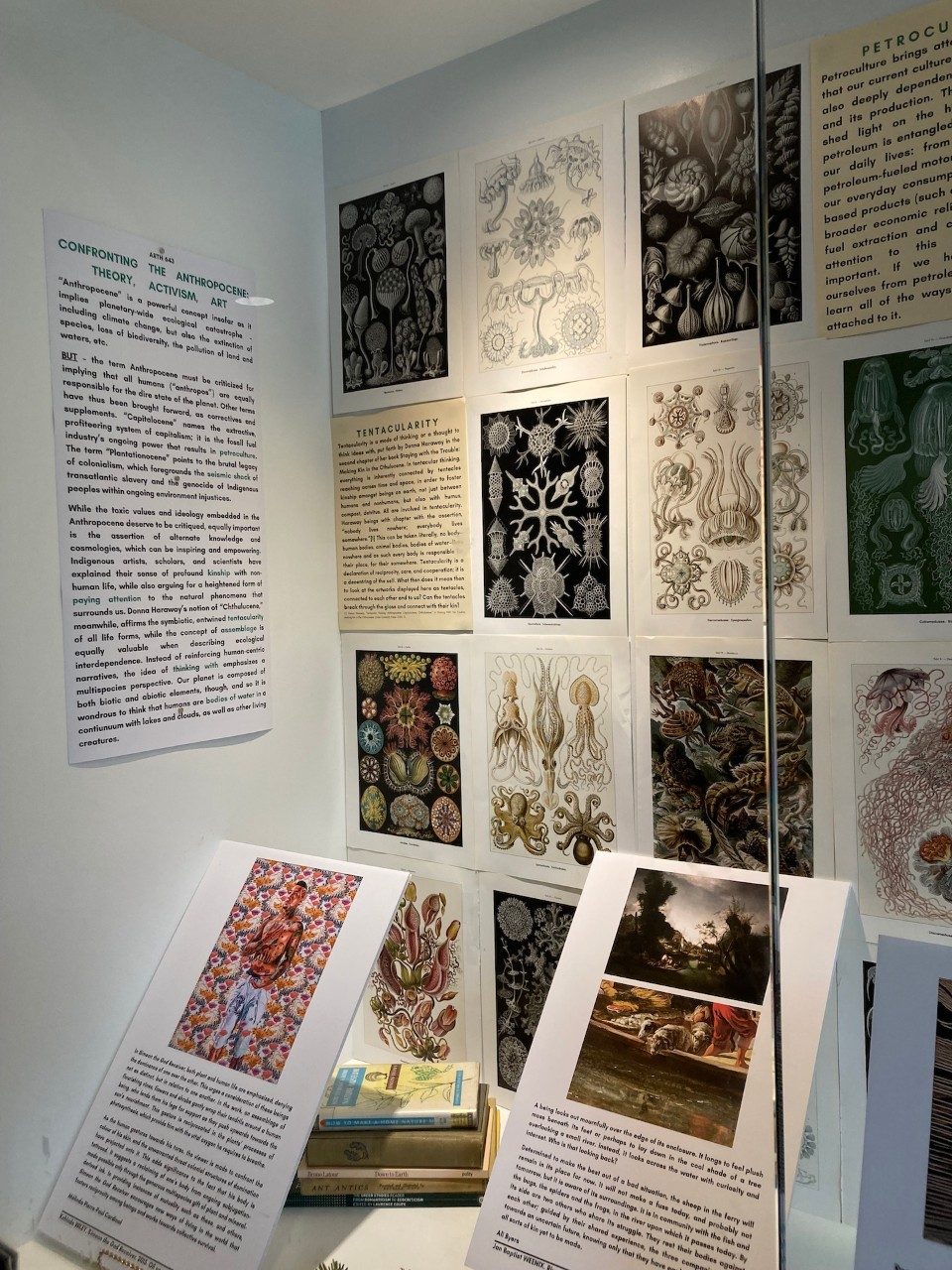 The contributions of the majority of women in European history cannot be read in the pages of official records. Instead, we can examine the rich and vast material culture women produced and consumed to read their stories and hear their voices.

During the eighteenth and nineteenth centuries, many women worked in textile production in Western Europe. Needlework especially became seen as 'women's work' during this time and was codified as craft, rather than fine art. This work was often produced in the domestic sphere by women and, as such, was both undervalued and underpaid. Not permitted to participate in the public sphere, the disenfranchised woman was able to use needlework to achieve agency of various kinds. The woman needleworker could subtly proclaim her political views through her choice of motifs and designs. She could relay the story of her life in the narrative created by her composition. She could contribute to a political campaign or movement by the symbolic use of colour and motifs. She could pass on her nation's historical events and battles through pictorial depictions stitched on banners. She could freely express who she cared for and loved by the objects she decorated and gifted. And she could exhibit her art for others to see by 'painting' with needle and thread.

The embroidered artworks you see represent the portion of this course dedicated to embodied learning and practice. Students put themselves in the place of women needleworkers of the eighteenth and nineteenth centuries in Western Europe. They were asked to produce a 5" x 5" original work of embroidery that was inspired by the type of embroidery work from their choice of any socio-political area within Europe during these two centuries. Each artwork had to be tethered to the historical embroidery by using four related elements, such as through the selection of fabric, stitch, motif, design, composition, or colours.

Through this exercise of doing, students developed a deeper understanding and appreciation for the level of skill, artistry, and time involved in producing a work of embroidery. While relatively small, each embroidered artwork you see represents many, many hours of labour. They also almost all represent the first work of embroidery the artist has ever produced... but hopefully not the last. ARTH 365: Studies in 17th and 18th Century Art and Architecture

Students in the fall 2022 semester course “Studies in 17th and 18th Century Art and Architecture” took their considerations of the course’s artists, artistic movements and techniques from theoretical examinations to engaged practice by creating pieces inspired by the material covered in this course. The students engaged the tactical, sensual and human dimensions of art production by trying their hand at chiaroscuro, tenebrism, and working within the visual language of movements from these periods to create beautiful and dynamic scenes inspired by works popular in Europe from the 17th and 18th centuries.

Art is a powerful tool for investigation and understanding. There is something remarkable to be found not simply in studying a work of art, an artist, a style, or movement, but in trying one’s hand at these techniques. What can we learn about our own period when we speak of the present in a visual language from another time? Students from “Studies in 17th and 18th Century Art and Architecture” invite you to share in their explorations—and perhaps try your own later—to see what we can further learn and appreciate from 17th and 18th Century Art History.

The medium, style, and influence taken by was the personal choice of the student, the only requirement was that the work fit within the Vitrine space with room enough for others, and engage course material.

Learn more
Browse the Vitrine archivesBooking inquiries
Back to top