‘There is no better way to speak than through art’ 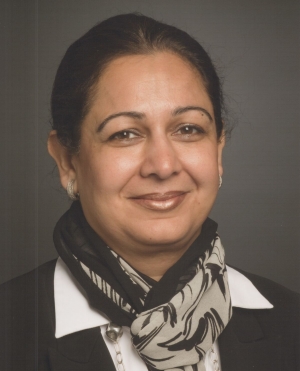 “I feel that if you want to know Canada, you need to know the Indigenous peoples,” says Roshi Chadha, BFA 10, MA 14.

With 30 years of experience serving on the boards of Canada’s most important art institutions, Roshi Chadha, BFA 10, MA 14, knows how much work and patience it takes to change attitudes. “Being loyal can mean being difficult at times!” she says.

Since graduating from Concordia’s Faculty of Fine Arts, Chadha’s mission has been to integrate Indigenous art into the mainstream of Canadian art. Appointed vice-chair of the National Gallery of Canada in March 2021, Chadha is seeing progress in the country’s flagship art collection.

Chadha, who co-owns the Westmount gourmet boutique Olives en folie, decided to return to university after raising her children. She originally aimed to study law. “I needed to study part-time at first and that wasn’t possible with law.” Chadha decided to talk to a counsellor at Concordia Continuing Education. “She asked me what I loved, and I said, art.”

Chadha went on to complete both her bachelor’s and master’s degrees at Concordia’s Department of Art History. “Studying at Concordia changed my life in so many positive ways,” she says. “It was one of the events in my life that made me better.”

Promoting Indigenous art became Chadha’s mission while she was still an undergraduate. “The first piece of art I ever bought was Indigenous, and my interest just developed from there.” When Chadha pursued an MA in art history, she wrote her master’s thesis about Canadian diplomacy through art, focusing on Indigenous art. “I feel that if you want to know Canada, you need to know the Indigenous peoples. And there is no better way to speak than through art.”

In 2010, Chadha and her husband, entrepreneur Baljit Singh Chadha, organized an art exchange and exhibition — called Sanavagut — between the National Gallery of Canada and the National Museum of India in New Delhi.

“It was the first art exchange that had ever happened between the two countries. We installed an inukshuk [the iconic stone cairn used by Inuit for navigation and to mark sacred places] outside the Canadian Embassy in the diplomatic enclave where all the embassies are in Delhi. That gave Canada and Indigenous art a lot of exposure.”

Chadha has held positions on a number of national and Montreal-based boards, including the Board of Governors of the Montreal Museum of Fine Arts and the Canadian Centre for Architecture. When she first became a trustee of the National Gallery of Canada in the late 1990s, she and her husband visited all the top museums in Canada, asking them to become more diverse and inclusive in their acquisitions and exhibitions. “It was not something museums were paying attention to at the time.”

Chadha applauds Canada’s museums for jumping on the opportunity to bring art online when accessibility to museums was curtailed during the COVID-19 pandemic. “The National Gallery is now working to go even deeper into digitalization of its art to improve public engagement,” she says.

Even with museums being closed for long periods, Chadha feels Canadians’ relationship to art changed for the better during the pandemic. “Art has been a respite for people. It’s a reminder of human potential, connection and beauty.”