Concordia grads take on leadership roles and prepare next generation of talent at Montreal-based Genetec
|
By Daniel Bartlett
Source: Advancement and Alumni Relations

Concordia graduates who walk down the halls of the Genetec corporate headquarters in Montreal’s Technoparc are likely to come across a familiar face. That’s because more than 10 per cent of the software development company’s 1,000 employees are alumni of the university.

Here are three Concordia alumni who are making an impact at Genetec. 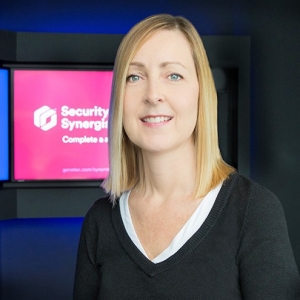 When Tracey Ades, BComm 92, MSc 96, completed her graduate studies at Concordia, Montreal’s job market was struggling in the aftermath of the 1995 Quebec referendum. A native Montrealer, Ades was determined to start her career in her hometown, even as she watched many of her peers move to other cities for job opportunities.

“Because I worked full-time as a waitress during my studies, I didn’t have business experience,” says Ades, who is the director of marketing communications at Genetec. “I really wanted to get a job where I could cut my teeth, get a lot of experience and then figure out what to do with it in a couple of years.”

After consulting multiple job postings, she came across a listing at Concordia’s Career and Placement Services for Silanis Technology (now eSignLive), a high-tech industry startup co-founded by Tommy Petrogiannis, BEng (elec.) 88. Ades applied for the position and was hired as the company’s first employee. She has remained in the high-tech sector ever since.

“What’s really great about working in high-tech in Montreal is that it’s a pretty small community,” Ades says. “You end up building relationships in one company and then they connect you to opportunities in other companies in the future.”

Ades moved on from Silanis in 2004 and gained experience working for a number of public and privately held organizations before landing at Genetec in June 2012. In her current role, Ades oversees the Genetec corporate and regional marketing teams in Montreal, Paris, Dubai and Singapore.  Her team focuses on activities including all materials related to graphic design, web and digital marketing, public and media relations, and content marketing.

She credits her master’s in administration at Concordia for helping her better understand business strategy and analytics.

“You have to figure out how you want to go to market. What’s our strategy? What’s the best way to tackle this market? How are we going to crack open others?” Ades says. “Being able to think analytically and develop strategies have been extremely helpful in my career, both as a junior marketer and now in a more global role.”

Given the challenges she faced after graduation, Ades advises students to look for work opportunities during their studies so they are better positioned to start their career when the time comes. She notes that when Genetec hires students from Concordia’s Co-op programs, the results are very positive.

“To have office or department experience along with your education is something that I would highly recommend because it makes you much more marketable as a student,” Ades says. “Look for internship postings or for summer work, and if there’s a co-op program you can ask to be in — great!”

From local to global 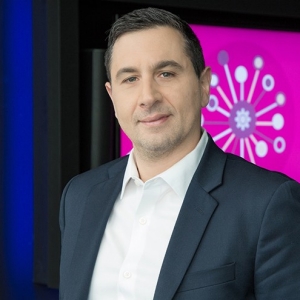 Dennis Masciotra, BComm 01, GrDip 03, knew in his last year of high school that he didn’t want to pursue a career in the sciences. He decided to take an accounting elective and discovered that the logic just came to him naturally.

He now works at Genetec as a senior accountant, tax and compliance.

“Because I had done well in the accounting course and liked it, I decided to make that my major,” Masciotra recalls.

After completing his undergraduate degree and graduate diploma in accountancy at Concordia, Masciotra was hired by Rabinovitch Luciano SENC, a small, Montreal-based accounting firm. He worked there for six years and was given opportunities to expand his knowledge base because of the company’s size.

“The learning curve is a lot higher because you’re less people,” Masciotra says. “I got to see a lot more within an audit file than my equivalent at a larger firm probably did. I was exposed to different industries. I think having experienced that was much more beneficial to my personal growth.”

By 2009, though, Masciotra didn’t find the work as stimulating as he once had and was seeking a change. His brother told him about an opening at Genetec. He soon submitted his application — after first conducting a little research on the company.

“I’m not the type to gamble, so I wanted to be sure of the decision,” Masciotra says. “The interview sessions went well and I just got a good vibe from them. The decision was pretty clear.”

Now a nine-year veteran at Genetec, Masciotra’s responsibilities include working on international audits and corporate tax situations, a role that has grown exponentially as Genetec has expanded into 12 countries worldwide. He also takes great pride in being a resource for newer employees when they need help with a question.

“There’s something really satisfying about passing on knowledge and helping people grow,” he says. “If I teach them how to be resourceful to find an answer, that’s growth on their end and that’s growth on my end as a mentor.”

Thinking back to his days as a student at Concordia, Masciotra appreciates the connections he made with his peers, some of whom he is still in contact with today. He fondly recalls the classes he took, the people he met, the hours he spent studying at the library and the local restaurants he frequented during his studies.

“The best way to describe what I enjoyed most is that it was a unique life experience,” Masciotra says. 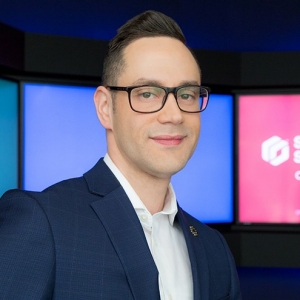 Milos Haravan, software development manager at Genetec, says it’s important to him to do something he loves: “You have to be invested in it.” | Photo: Concordia University

As a young teenager, Milos Haravan, BEng 09, took an interest in computer technology. By age 15, he learned C programming language and quickly realized he wanted to pursue a career in software engineering when he was older.

That vision came true, as today Haravan is a software development manager at Genetec. And when the opportunity came for Haravan and his colleagues to introduce science, technology, engineering and mathematics (STEM) to teenagers at le P’tit Bonheur summer camp in Lac-Supérieur, Que., in 2017, he jumped at it.

“We called it Robotec#,” says Haravan. “We did an introduction to writing code using Lego Mindstorms. There was a physical engineering component where they built robots, but they also programmed those robots.”

Haravan’s path to Genetec began at Concordia while he was still completing his undergraduate degree in software engineering. Working as part of a research group led by Maria Amer, associate professor of electrical and computer engineering, he and his colleagues built a distributed video surveillance system. Amer was impressed with the results and asked the group to present their project to Pierre Racz, president of Genetec.

Afterwards, Amer gave Haravan’s resumé to Genetec and referred him for their internship program. “I didn’t even know about that,” Haravan recalls. “Then I got a call, did an interview and got my internship in the summer of 2008.”

At the summer’s end, Genetec offered Haravan a permanent position once he completed his studies in 2009. He now works on two teams that are responsible for the company’s software development kit and the health monitoring of its solution.

“In software development, you have rely on the people you work with,” Haravan says. “It’s about positively influencing people to not just to do their work, but to be inspired to do their work and to see what you’re trying to accomplish.”

With Robotec#, the company is now reaching out to young community members to share their knowledge with the next generation of talent. Haravan describes the experience as “very rewarding” and one he is looking forward to doing again this summer.

He hopes the program shows participants that there is much potential for things that can be done through STEM fields.

Watch Andrew Elvish, MFA 97, vice-president of marketing and product management at Genetec Inc., tell why he’s made a planned gift to his alma mater.