A journey in self-discovery

‘I embraced my story, my voice and my style on the seventh floor of the John Molson Building.’
|
By Lydie Dubuisson, BFA 17
Source: Concordia University Magazine 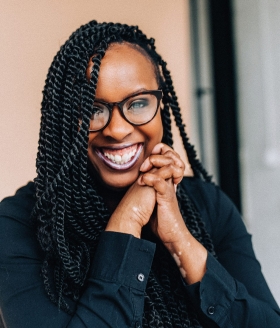 As a child, I had a difficult time seeing a clear path to my future. I was — and still am — a big dreamer. Most of my report cards came back with “distracted” as the recurring feedback. Despite that fantasizing as a child, I could have never imagined who I’d become today.

I was raised in a conservative evangelical family in a very small town on Montreal’s South Shore. My upbringing focused on the rapture, the afterlife in heaven, a disdain for earthly pleasures and on becoming a wife.

After graduating from high school and realizing the rapture could take longer than expected, I panicked. I panicked because my fundamentalist education added to a society that erases Black girls and women from culture. I panicked because it became increasingly hard to imagine myself as something other than a statistic or stereotype.

Being a Black woman in French-speaking Tiohtià:ke/Montreal is incredibly complex and confusing. Strangely enough, being a religious Black woman in white suburbia accustomed me to being an unstoppable oddball. It gave me the drive to exploit my creativity and take control of my destiny.

For as long as I can recall, I thought writers were the luckiest people in the world, so I placed that career on an unattainable pedestal. Through my upbringing, I was taught that Black women don’t write. I didn’t know about Maya Angelou because she was not to be spoken of in evangelical churches and she didn’t exist in French education. Black women sing. So that’s what I did.

After leaving home and my community, I joined the People’s Gospel Choir of Montreal where I started my life as a singer. I then auditioned for a production of Jesus Christ Superstar with a community theatre company. I was hooked on musical theatre, yet yearned for more.

'It was the first time I truly saw myself'

I was 32 when I enrolled at Concordia to become an English teacher. I was working at the Montreal Children’s Hospital at the time and I’d spend my days catering to a team of surgeons and nurses who were passionate about their work. I changed course to audition for Concordia’s Department of Theatre. I had read about the Theatre and Development program, which focused on theatre as a social vector for change. It was the first time I truly saw myself.

The program’s mandate was to use theatre as a way to engage with community, and as a development tool for education, therapy and exploration. It was theatre for empowerment — an opportunity to be more than an entertainer. All it took was a few classes with professors Ted Little and Rachel Van Fossen to feel right at home in my program; I embraced my story, my voice and my style on the seventh floor of the John Molson Building.

I am a playwright, a director and a dramaturge. I write plays about what I know: Black girls in churches, isolated immigrants, the invisibility of intersectionality and hope. I share stories in English, French and also in Creole. Lydie Dubuisson from the 1980s would never have imagined this life. She would have never believed that she could be a creator or that her voice would be heard. I still don’t know what my future holds, but I know I will allow myself to continue to dream big.

Lydie Dubuisson is the artistic associate for Montreal’s Black Theatre Workshop (BTW). A reading of her play, Sanctuary, opened the BTW’s 50th-anniversary season in January.