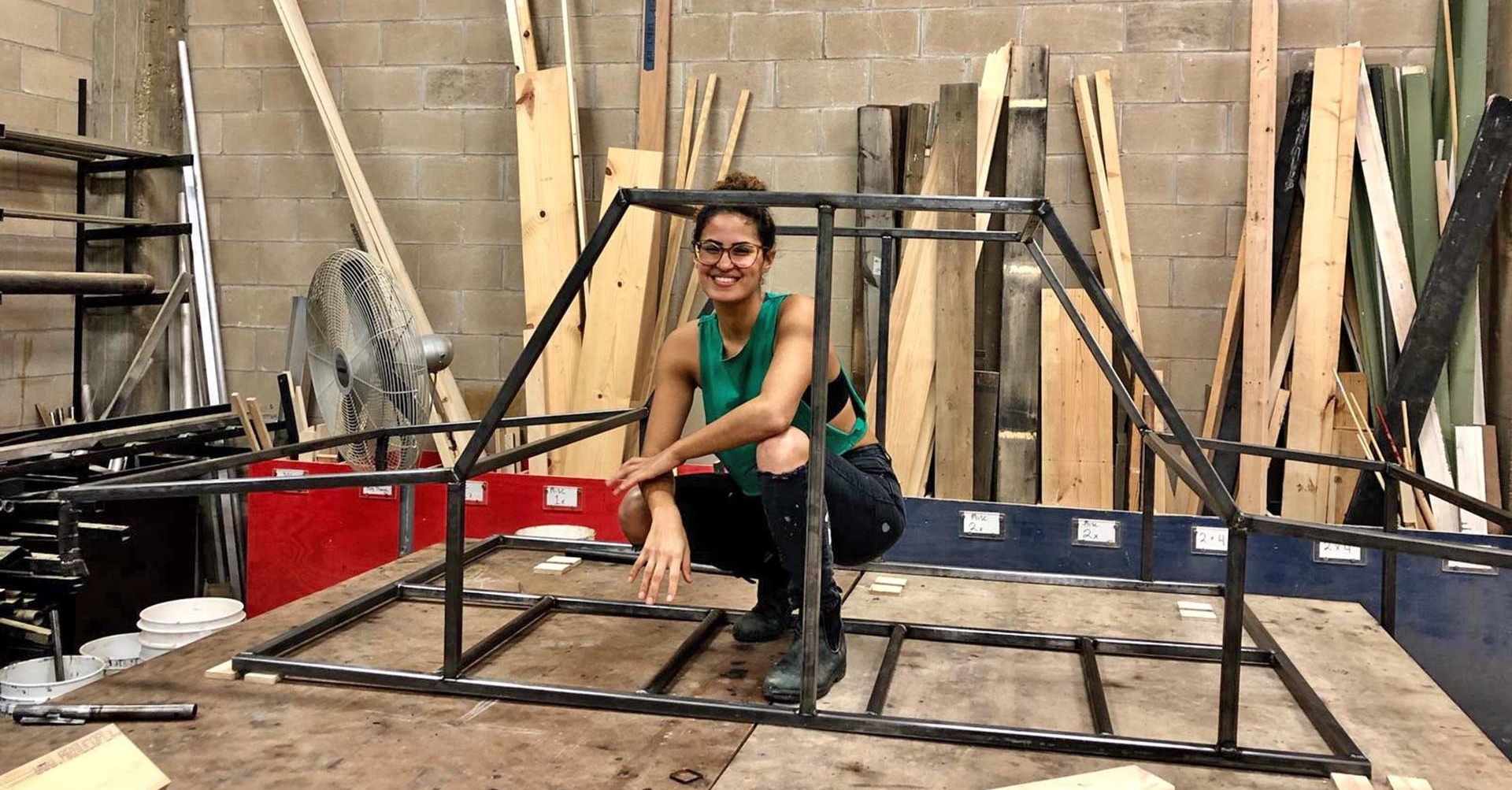 Theatre design graduate Iman Corbani, BFA 16, was alerted to the alarming amount of waste produced in construction while visiting a friend studying architecture in Switzerland.

“I thought, ‘We need to do something in theatre.’ No one ever made us aware that our designs can influence how things are built and how much waste is produced,” says Corbani. After obtaining her Concordia degree in Design for the Theatre, she pursued graduate studies at the University of Texas (UT) at Austin.

With sustainability in mind, she went on to produce the largest entirely student-led production in UT Austin’s history.

“It was important to me that the production be as big as — or bigger than — other productions for the data to be comparable, and to be taken seriously,” she says.

Using Leadership in Energy and Environmental Design (LEED) calculation methods, the production was determined to be 95-per-cent zero-waste. Things like wrapping cardboard columns in newspaper to make birch trees rather than painting the cardboard, or using a discarded red cable to concoct a car hood, added up.

The play ran in December 2018 and still garners attention in Austin. A panel discussion gave momentum to the zero-waste and sustainability-in-theatre dialogue. Corbani is working with UT Austin to develop a class in sustainable design and ultimately, an entire certificate.

Though her days are full, Corbani manages to display her work in projects outside the university. Thanks to a professor who noticed her talent, she spent almost a month last summer working alongside professionals at Robert Redford’s company, Sundance.

An opera set design she created caught the eye of a producer in Kuwait for whom she will design this summer. The head of the dance program at UT Austin had Corbani design the set for his show, (Re)Current Unrest, which is currently touring in the U.S.

More projects are brewing, including the gradual establishment of her own company that will provide various production services.

Before graduating in May 2019, Corbani defended her thesis, masterminded more zero-waste set designs and fulfilled her final teaching requirements. She emphasized zero-waste in her teaching as well.

“If a student tells me they want to build something and asks where they should start, my answer is always, ‘What’s already around you? What can you use or reuse before you start purchasing?’ Sometimes you’ll find something perfect.”

Corbani credits Concordia for opening her eyes to many facets of her chosen field. “Coming from Concordia, I had a lot of interests because we took classes in many disciplines like lighting, costumes and set design. And that was good because when we understood what our colleagues were doing, it made us better collaborators. It’s a strong university for that, and for pushing creativity and design,” she says.