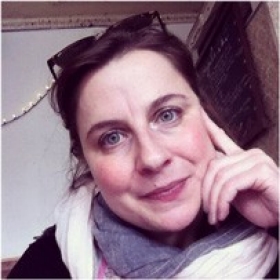 Recently, you presented a study on the topic of family language policies among parents in Quebec who are raising children in multilingual home environments. What are some of the key points that emerged from this research?

This presentation was based on a project I am involved in with colleagues from Concordia and McGill (including fellow QUESCREN researcher-member Krista Byers-Heinlein) that was funded by the CRBLM. We looked at parents who are raising infants/toddlers with multiple languages in the home: English, French, and heritage languages. One important finding is that parents seem to be raising children multilingually for three main reasons. Firstly, because they believe that multilingualism holds utilitarian value, so it will be useful for their children in later life. Secondly, because parents believe that multilingualism is linked with social identity and in-group loyalty, so it will help their children be a part of their linguistic community and communicate with the people who are part of that community. Thirdly, because they believe that multilingualism imparts cognitive benefits, such as making their children better learners and more flexible thinkers.

How might your work on multilingualism relate specifically to English-speaking families in Quebec?

English-speaking parents did not behave very differently from other parents. For example, one of the findings that emerged from the family language policy study is that many parents, whether English-speaking or not, are keen to have more bilingual resources to support their children’s development in their different languages. Parents who are raising their children with English as one of their languages seem very satisfied with the monolingual English resources that are available to them, but they have strong desire for more resources that combine multiple languages—in this case, English with other languages. So that is something we want to consider further in our future work.

You work at the Mercator European Research Centre on Multilingualism and Language Learning, which is part of the Fryske Akademy in the Netherlands. You have also conducted research on language and linguistic minorities in Canada and Quebec. What would you say are some of the similarities and differences in the approach to studying linguistic minorities in Europe and in North America?

But the contexts are similar in the sense that in Quebec, in Fryslân, and elsewhere, people’s languages are closely intertwined with their social identities. That is why, whether we are looking at this or that side of the pond, it is so important to investigate intergroup relations between linguistic communities.

Multiple languages often co-exist in many communities around the world. As a sociolinguist, what is your advice in terms of coming to terms with that complexity and living with linguistic diversity?

I am not sure if it is really a question of “coming to terms with it”. Of course, there are some people who struggle with linguistic and other kinds of diversity, and they tend to get much attention from the media. But in reality, most Quebecers—that I know, at least—consider diversity with regard to language and other aspects of life as an asset. That is the key for harmonious intergroup relations in Quebec and elsewhere: not seeing diversity as a threat, but as an asset to your life and to the society you live in.

Quebec is interesting in that sense because so many people are multilingual, and in the study mentioned above, we only included parents who are transmitting multiple languages. So, for future research it will be interesting to conduct a similar study amongst monolinguals. Those are very hard to find in Quebec, though—which, I guess, is a good thing.