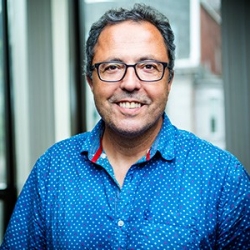 My role has been to help QUESCREN grow within Concordia.

When did you become involved in QUESCREN?

I have a lot of research experience with minority issues, but outside of Quebec as I grew up in Moncton, New Brunswick and my prior position was at l’Université de Moncton. I have been working on the migration of francophone minority communities outside of Quebec, and am now mostly working on immigration in small and medium-sized cities in Canada and Quebec. I’ve just finished looking at the situation regarding Syrian refugees and what some of the cities, such as Moncton, Sherbrooke and Granby, did in welcoming them back in 2016. I have also done work on international students going to small universities in Quebec, New Brunswick and elsewhere. So, mostly regionalization issues, also looking at immigration from the perspectives of different migration flows, such as international students or highly skilled migrants.

I’ve just received a SSHRC Insight grant for research on immigrants coming from France to Canada, not only in Quebec. I’m interested in looking at what happens in Francophone communities outside of Quebec, such as Manitoba, Yukon, British Columbia, and we are going to be doing case studies on this.

Please describe community vitality in your own words

I have a holistic view of what vitality means. For me, it’s the feeling within a community of being in good ‘health’, with a feeling of vibrancy with culture, arts, diversity, and being open to different experiences and different people. I think a lot of the Acadian community in New Brunswick and other provinces that was able to protect language and culture but has many challenges to confront.

For me, it’s maybe the involvement in the annual ACFAS (Association francophone pour le savoir) events, as ACFAS is a very francophone association and QUESCREN has organized numerous conferences at these congresses. It has been important in showing the community’s reality and it’s been a way to meet other researchers. The exciting thing about QUESCREN is building this community of researchers both in and outside of Quebec.

When I was looking at Quebec from the outside, I remember thinking that English-speaking communities as being mostly based in Montreal, in a certain part of the city, with the power. And they still have power, when we think of the economy. However, since working with QUESCREN, I’ve also come to realise that there’s a lot of diversity within the English-speaking communities, such as when we go to Bishop’s, to the Eastern Townships, as well as learning more from smaller English communities, like in Gaspesie, that are remote and isolated. Being involved in QUESREN has given me the possibility to understand that picture.