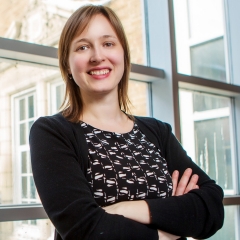 What is current focus of your research?

At the Concordia Infant Research Lab, we are interested in how children who grow up bilingual navigate the two languages. This involves studying how they learn the sounds, patterns, words, and actually figure out there are two languages. We are also interested in what normal development looks like for children growing up bilingual, trying to distinguish typical from atypical bilingual development.

How might your work on bilingualism relate to English-speaking families in Quebec?

One project we’re currently doing is trying to understand what resources parents would find useful for raising a bilingual child, such as how to manage two languages and when to introduce them, or how to consider language when making decisions about education or childcare. There’s also the interesting dynamic when a child has better proficiency than their parents in a second language, for example French, or even chooses to use a different language to their parents. Our work aims to answer such questions that parents, or even sometimes daycare teachers, may have.

What is the ideal age for second language acquisition?

In general, the younger the better as your brain is more receptive. However, a new language can be learned at any time, so it’s never too late. In terms of when parents or families are trying to decide when to introduce a new language, I think it really depends on their possibilities, such as their daycare and education options, and what’s right for them. Language is about an opportunity for learning, so it’s important a child has rich input when learning one or more. But language is also a basis for families’ emotional connection. As such, it’s recommended that a parent speak to their child in whichever language(s) they feel comfortable.

Are there any other projects that you’re currently involved in?

We’ve been involved in an initiative in N.D.G called Pluri (Plurilangue) that embraces language richness in the neighbourhood and involves families from a variety of different linguistic backgrounds. The initiative looks at the science behind bilingualism and multilingualism to try and help support families in speaking their home language, and those languages being valued in a school setting. Research has actually shown that there are more concerns from parents in Montreal raising bilinguals and speaking a language other than French or English at home, as there is less support available and they may not have a large community who speak their home language or many opportunities where their children can be exposed to it.