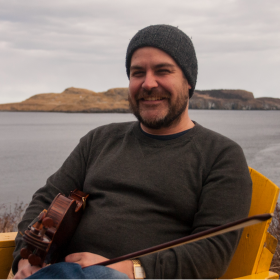 Please tell us a bit about yourself and what you are currently working on.

I was brought up in the Greater Toronto area, and moved to Montreal in 2005 after finishing a bachelor’s degree in engineering. Once here, I quickly got involved in the folk and country music scenes. I’m completing a PhD in ethnomusicology at Memorial University in Newfoundland about home recording practices in the English-speaking community in Gaspé and setting up digital sound archives. In 2019-2020, I worked for the Quebec Anglophone Heritage Network (QAHN) on a project called “A Different Tune,” a province-wide survey of musical culture to document and celebrate musical heritage in Quebec’s diverse English-speaking communities. Currently, I’m helping them with online programming and digital content.

How did you get involved in the Quebec English-speaking music scene?

When I moved to Montreal, I was living in western Notre-Dame-de-Grâce neighbourhood, close to a country music establishment called the Wheel Club. I’d go play the fiddle with the other musicians every Monday night. Many of the club’s regulars were older people from Gaspé who’d ended up in Montreal in the post-War years. I was surprised that they came from parishes where English was the predominant mother tongue, before the 1970s anyways. I was already into regional fiddle styles from the southern U.S. so I was naturally curious what fiddle music would sound like by English-speaking Gaspesians. I later met a guitarist player whose dad was a fiddle player from Gaspé and he sent me a few digitised recordings of his dad playing. I was blown away by his father’s command of the music, as good as any traditional fiddling I’d ever heard previously.

I began going to Gaspé every summer in 2010 for the local festival season and I was lucky to live out there in 2015 and 2016 during my PhD fieldwork and interact extensively with the English-speaking minority and its community organizations.

In your experience, what makes music in Quebec’s English-speaking community distinct?

I can’t generalise the community as a whole, and it plays out differently in different regions, but, as in any minority contexts, music is often wrapped up in our early formative years and our identity. It reminds people of home, of the communities they came from, and English-speaking Quebecers tend to identify strongly with very local, regional identities, whether urban or rural. So it’s usually not so much about language as about their senses of home and place in Quebec. In the rural communities where I’ve mostly worked, fiddle and country music often convey a very strong sense of local memory, often deeply wrapped up in memories of specific family members and neighbours or seasonal celebrations.

From your experience, how can music support a community’s well-being?

Music is an integrative cultural form that most people can enjoy, regardless of their own musicianship. I’ve found that local music is often at the heart of community life and social action (e.g. fundraisers, festivals, celebrations) in many of Quebec’s English-speaking communities such that it’s hard to imagine their community’s vitality without music.

What are the different type of music scenes that you’ve worked with in Quebec’s English-speaking community?

I’ve mostly worked with traditional music historically used for square dancing and stepdancing in Gaspé and the Chateauguay Valley, a musical culture shared between both Francophones and Anglophones. With the “Different Tune” project, I was able to work a bit with Montreal’s West Indian community through an organization called West-Can Folk Performing Co; with the gospel music scene in Little Burgundy through Kim Sherwood, the choir director at Union United and the People’s Gospel Choir; and with KlezKanada, a grassroots organization that supports Yiddish music and culture in Montreal and beyond.

Other than all in-person events getting cancelled, what has been the main way that the COVID-19 affected your work?

A few weeks into the pandemic, I was asked to help an open-mic in the Chateauguay Valley, Brysonville Schoolhouse Revisited, transition to an online format. I had to quickly learn how to produce and host livestream performances with performers joining remotely on Zoom. I went on to use these skills at QAHN where we’ve put on nearly 50 events with various partners since the beginning of the pandemic. Being able to produce online events is actually a blessing for Quebec’s English-speaking communities, especially off-island where they tend to be geographically dispersed. Despite the strange mediation through phone and laptop screens, there’s always been a sense of community and togetherness at these events.