Patron of the arts and education received an honorary degree from Concordia in 2014 and funded scholarships
|
By Guenevere Neufeld
Source: Advancement and Alumni Relations

“Concordia, the City of Montreal and the art world has lost a great champion in Michal Hornstein,” says Concordia President Alan Shepard. “Michal’s commitment to enriching our culture was matched by his love of his wife, Renata, and his family. I have a deep and personal affection for Michal and Renata. We’ll all miss him.” 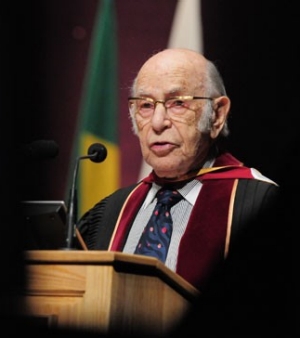 Hornstein’s story is as improbable as it is inspirational. Born in Cracow, Poland, in 1920, he attended business school there and later joined his father in running a garment factory, until it was confiscated by the Nazis during the Second World War.

While attempting to flee the Nazis, Hornstein was arrested and forced onto a train bound for the Auschwitz death camp. During a border stop, Hornstein escaped by jumping from the train, seeking refuge in the forests of Slovakia.

He eventually met Renata Witelson, another Polish Jew fleeing Nazi persecution. The two survived the war and moved to Rome, where they were married in 1946. Hornstein worked in currency exchange and stock trading in Rome, where the couple’s lifelong love of art began to take form.

Upon the advice of the Canadian ambassador to Italy they had befriended, the Hornsteins moved to Montreal in 1951, when Hornstein founded the real estate company Federal Construction Ltd. He served as its president and continued to work until recently.

Hornstein’s growing love of art led him to a relationship with the Montreal Museum of Fine Arts (MMFA) that would last decades. He became a member of the MMFA’s board of trustees in 1970 and later was its vice-president and chairman of the Acquisition Committee for European Art before 1900.

The Hornsteins donated more than 100 pieces of exceptional old masters to the MMFA. The works, likely valued at over $100 million, will be housed in the soon-to-be opened Michal and Renata Hornstein Pavilion for Peace, which is devoted to art and education. Their gift was the largest private art donation to a Quebec museum in modern history.

In addition to the MMFA, the Hornsteins extended their tremendous generosity to a number of local health organizations including the Montreal Heart Institute and Montreal General Hospital, and universities including Concordia.

The Hornstein’s first gift to Concordia, in 1998, established the Renata Hornstein Graduate Fellowship in Art History, a testament to their own experience of the richness of art. 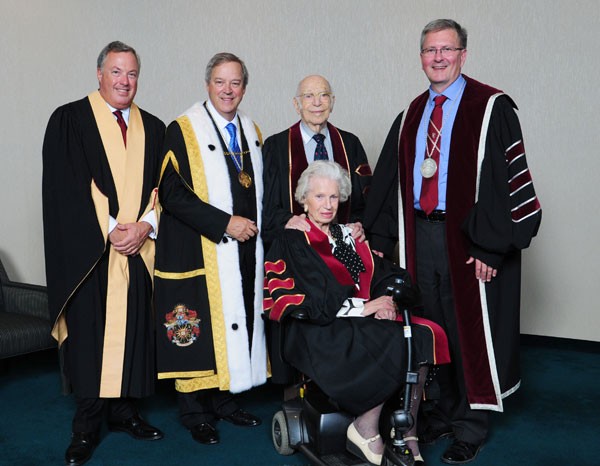 Michal and Renata Hornstein at their honorary degree ceremony in June 2014 with (from left) Norman Hébert, Jr., chair of Concordia’s Board of Governors, L. Jacques Ménard, then-chancellor of Concordia, and Concordia President Alan Shepard.

In 2014, the Hornsteins pledged $1 million to Concordia to establish the Renata Hornstein Doctoral Scholarships. Valued at $100,000 annually, the awards were created to attract top talent to the Faculty of Fine Arts — encouraging those with a passion for art education, art history, film studies or interdisciplinary fine arts programs to pursue their academic dreams.

Thanks to his devotion to advancing the arts, Hornstein was awarded various medals and distinctions throughout his career. In 1984, he was made a member of the Order of Canada and in 1992 awarded a 125th Anniversary of the Confederation of Canada Medal. He was made a Knight of the National Order of Quebec in 1993, promoted to Officer in 2002 and Grand Officer in 2013.

The City of Montreal named them as Great Montrealers in 2012, the only couple to jointly receive the honour.

“In 2014 Concordia conferred honorary degrees on Michal and Renata to commemorate their desire to advance art and education,” says Bram Freedman, the university’s vice-president of Advancement and External Relations. “The fact that Michal never stopped working reflected his passion for life.”

Hornstein is survived by Renata, his wife of more than 73 years, and their two children, Sari and Norbert.