Michal and Renata Hornstein: the incredible story of 2 Concordia honorands

The philanthropists have lived an extraordinary life
|
By Lucas Wisenthal 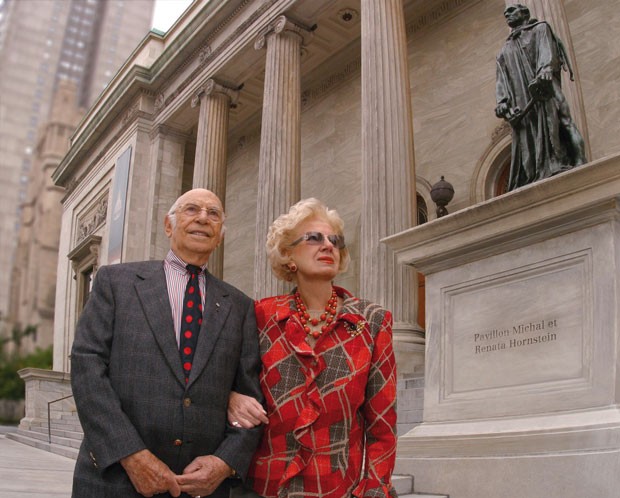 Concordia honorands Michal and Renata Hornstein have devoted their lives to philanthropy. | Photo courtesy of the Montreal Museum of Fine Arts

In the midst of the Second World War, Michal Hornstein, a native of Poland, was forced onto a train. Like more than one million other European Jews, he was destined for Auschwitz.

Before the train reached the notorious concentration camp, though, Hornstein jumped from its side. He spent the rest of the war — which claimed the lives of innumerable of his family members and friends — hiding from the Nazis in the forests of Czechoslovakia and Budapest before decamping for Bratislava.

“It was one of several incredibly close calls he had during the war,” says his daughter, Sari Hornstein.

In Bratislava, he met Renata Witelson, another Polish Jew fleeing Nazi persecution. Witelson had spent much of the war in hiding — in the Warsaw ghetto, in a convent, with a Polish family and in safe houses. It was in one of those safe houses that the couple met. In 1946, they were married in Rome. By 1951, at the encouragement of the Canadian ambassador to Italy, whom they had befriended, they had relocated to Montreal.

In the decades that followed, Michal went on to great success in real estate, developing residential and commercial properties through his company, Federal Construction Ltd. Yet while the Hornsteins appreciated all they had, they felt obliged to share it with the city and country that welcomed them. They gave — and continue to give — to a wide range of institutions that include the Montreal Museum of Fine Arts (MMFA), the Cedars Cancer Institute, the Montreal General Hospital and Concordia University.

“Everywhere they went — a hospital, a museum, wherever — they made connections with people,” Sari Hornstein says. “They felt it was their responsibility to give back.”

On Wednesday, June 11, at the John Molson School of Business’ spring convocation ceremony, Concordia will confer upon Michal and Renata Hornstein honorary doctorates in recognition of their lifetime of philanthropy.

“It’s a well-deserved honour,” says Hilliard Goldfarb, associate chief curator of the MMFA and a long-time friend. “Their largesse spans all walks of life in Montreal.”

As Hilliard explains, when the Hornsteins lived in Rome they developed an appreciation for art, which, as the years progressed, transformed into a world-class collection of works by Dutch, Flemish and Italian masters including Rubens, van Goyen, di Paolo and more.

Though they had already given to the MMFA — where Michal has served on the board of trustees since 1970 — in 2012 they donated approximately 70 Old Master paintings, valued at about $75 million, to the museum.

“What they went through during the Holocaust made them strong but also bred in them a desire to do good and be grateful for what they were granted later, during their lives in Rome and Canada,” Goldfarb says.

Renata chronicled her wartime experiences in two self-published volumes of narrative poetry — A Tumultuous Journey: Horror, Hope and Happiness (2008) and From Precipice to Paradise — And Candid Thoughts (2012).

In addition to being generous benefactors of the arts, the Hornsteins are also steadfast supporters of education. Both of their children hold PhDs — Sari is a Washington, D.C.-based writer and Norbert is a linguistics professor at the University of Maryland. Michal and Renata Hornstein have also long championed Concordia, giving generously to the university, with Michal serving as honorary treasurer of its Campaign for a New Millennium, 1996-99. 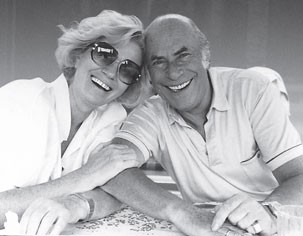 In 1998, through a $125,000 gift, they established the Renata Hornstein Graduate Fellowship in Art History, which allows two new students to undertake postgraduate work at Concordia each year.

Among the recent recipients is Marie-Hélène Busque, who received an award of $3,125 last winter. Busque plans to use the funds to travel to Paris, where she will pursue her research on the patrons of high-end fashion houses and the collectors of the goods they produce.

“The funding I received was a huge benefit to my thesis,” Busque says. “By examining the donations to the Palais Galliera fashion museum and the Fondation Pierre Bergé-Yves Saint Laurent, I’ll be able to identify buyers and their collecting patterns.”

As Goldfarb explains, by nurturing research like this, the Hornsteins have found yet another way to support the cultural institutions to which they have devoted their lives.

Michal continues to work out of his Montreal office each day, while Renata has remained committed to the arts, her own included.

“They absolutely adore each other,” Goldfarb says. “Their life is one life.”

Michal and Renata Hornstein will receive their honorary doctorates at the John Molson School of Business’ spring 2014 convocation ceremony on June 11 at 3 p.m. in the Salle Wilfrid-Pelletier at Place des Arts (175 Ste-Catherine St. W.).