Two Concordia research teams have successfully pressured the City of Montreal into rethinking how it will get feedback from seniors to foster an “age-friendly” community.

At the end of January, the municipal government announced it would immediately launch four French-only consultations on aging in the east end of the city.

Nothing was planned for Montreal’s west end, and seniors living in culturally diverse neighbourhoods like Côte-des-Neiges–Notre-Dame-de-Grâce (CDN-NDG) stood to be excluded. Additionally, the process was poorly advertised, leaving community organizations and individuals with little time to prepare.

On Feb. 7, they and their research teams penned a public letter to Mayor Valérie Plante calling on her administration “to substantially improve the (consultation) process in order to make a genuine effort to engage older adults.”

Their letter shed light on ways in which the process was ageist, failed to recognize the special challenge winter presents to those with limited mobility and overlooked the significant portion of seniors who do not or cannot access internet-based surveys.

Sawchuk and Hebblethwaite concluded their letter by suggesting that, “If Montreal wants to call itself an age friendly city, it should begin by adopting consultation processes that are attuned to the realities of the older adults who live here.”

Following the public letter, ACT and engAGE worked with Seniors Action Quebec, the African Canadian Development and Prevention Network, the Centre for Research-Action on Race Relations (CRARR) and others to continue pushing the city.

In the weeks since, the issue has been taken up by local media more than 30 times.

Now, the City of Montreal has taken action to improve how it is talking to seniors. They have translated the survey into English, made it available to be printed, added consultation locations in the west end of the city, and extended the consultation sessions into late March.

Hebblethwaite attributes part of their success to the way the letter was framed.

“We were able to clearly articulate the problems with the consultation and provide straightforward suggestions to the city for improving the process,” she said.

What it takes to intervene

The Concordia research teams were able to mobilize so quickly because they were armed with extensive prior research.

“Being research-ready and caring when an issue comes up is key,” said Sawchuk.

Reflecting on their intervention, they also highlighted the importance of minimizing complexity.

For example, they knew that while the youngest, wealthiest and most connected seniors are online, the oldest, poorest and most isolated seniors do not access the internet regularly. This issue is also tied to general literacy and becomes further complicated by gender and socio-economic status. But in their letter, they zoomed in on a key, pragmatic message: make the survey available to seniors in a paper format.

With this move, the city would be able to better reach seniors who are not digitally connected. 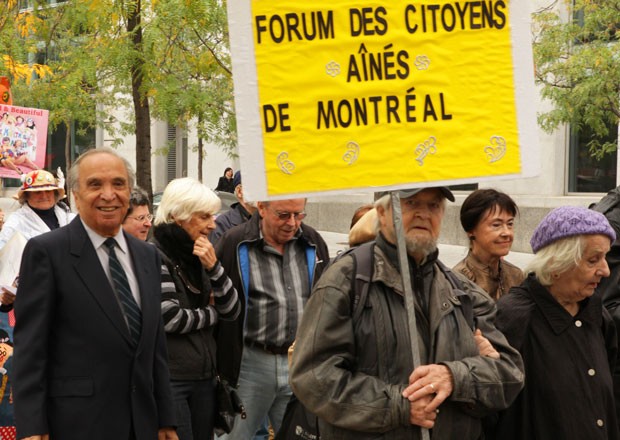 Constance Lafontaine, associate director of ACT and a governing board member of engAGE, worked closely with Sawchuk and Hebblethwaite on the intervention.

“When you’ve been working together and have established relationships of trust, you can pick up the phone and ask for support or expertise, you don’t have to create those relationships from scratch.”

Sawchuk noted that long-running community partnerships built on meaningful collaboration have produced a wealth of knowledge, including a deep understanding of the experiences of older adults who live in Montreal.

“We’ve been talking to and working with seniors who know the challenges of living in a city like Montreal for years — and they are the true experts on this subject,” she said. “We were able to use our resources to get their expertise out there and to get people talking about these issues.”

Hebblethwaite also pointed out the supporting role played by Concordia, which encourages its researchers to get their hands dirty and embrace the city.

“Being part of a university that supports community engagement by researchers is helpful. It’s important that this advocacy and activism is recognized,” said Hebblethwaite.

The City’s consultation process is set to wrap up at the end of this month, but ACT and engAGE will be watching as the city’s action plan for seniors takes shape.

Through their recent intervention, both research groups have built new relationships and Sawchuk, Hebblethwaite and Lafontaine are committed to continue working with community organizations who are actively making Montreal a better place for seniors to live.

Read more about this intervention, including the full list of media coverage, by visiting: www.actproject.ca/montrealseniors or www.concordia.ca/engage.

Learn more about the City of Montreal’s public engagement consultations.

Take part in a public conversation about ageing in the city on Thursday, May 3, organized by Concordia's University of the Streets Café.