From ghosts to burlesque to Irish heritage, Donovan King, BFA 99, introduces visitors to the city’s colourful past
|
By Maeve Haldane
Source: Advancement and Alumni Relations

Donovan King, BFA 99, is not one to sit still. The teacher of English as a Second Language and self-described theatre activist is known for his entertaining Montreal walking tours. Those include revealing a range of the city’s lesser-known past, from spooky ghost tales to Irish history. 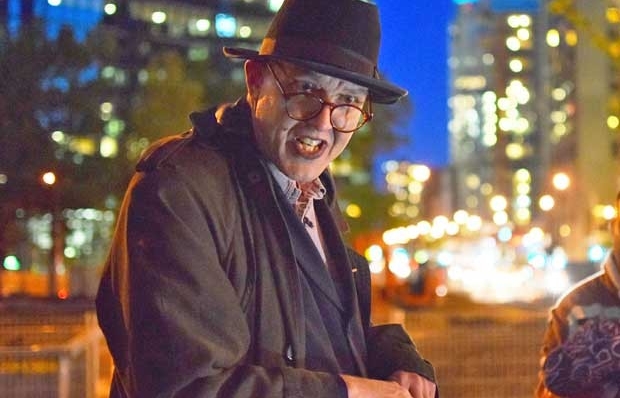 Donovan King brings his theatre and education background to his Haunted Montreal and Irish Montreal Excursions walking tours, which are among many projects. | Photo: Michael Jacoby

King first got bitten by the haunted-acting-genre bug thanks to Robert Short, a Hollywood special effects maven who won an Oscar for Beetlejuice (1988). When Short set up the haunted Chateau Greystoke in Montreal’s Decarie Square shopping mall in the 1990s, he hired King to find bilingual actors and do a creepy character himself.

Not long after, King moved across the Atlantic Ocean to run the entertainment side of the world’s largest horror tourist attraction, the London Dungeon.

With this experience, he was a shoo-in to be hired by Fantômes Montreal 11 years ago to lead ghost walks through Old Montreal. In 2012 he started his own walking tour company, Haunted Montreal, to further delve into the town’s spectral stories.

An ardent Irish history buff and director of the Irish Monument Park Foundation, King recently launched Irish Montreal Excursions. Another new company, Secret Montreal, is also in the works. It will offer tours of the hidden and seamier side of the city’s history.

King also heads the Infringement Festival, which grew out of his being banned for life from the St. Ambroise Montreal Fringe Festival.

He sat down to discuss his unconventional career.

Tell us about your Irish walking tours, which you recently started in Montreal.

Donovan King: “One tour is about the famine of 1847 and the other’s a more general Irish history walking tour. It covers things like St. Patrick’s Basilica, Notre Dame de Bonsecours [the first church to welcome the Irish in Montreal], the offices of the newspaper The Vindicator and the old neighbourhood Little Dublin, which is now Chinatown.

There’s a fascinating history that’s largely been erased. We have the first Irish Famine monument in Canada, the Black Rock, erected in 1859. It’s on a traffic island near the Victoria Bridge, surrounded by cars, roads, electricity pylons, and there’s no indication what it is unless you’re right in front of it.

About five per cent of the population in New France was actually Irish. When Oliver Cromwell took over Ireland [in the 1650s], he gave the soldiers an option. He said you can either disarm and become subservient to me or you can get out of here and go fight for some other king in a Catholic country.

So tons of them went to France, where they fought for the king. Then many became settlers here in New France. They say now about 40 per cent of all people in Quebec have Irish blood.

A lot of them continued westwards, of course, but many of them, about 50 per cent, were too destitute. They had no option but to move into Griffintown.

This became a real shanty town. No running water, ramshackle constructions, extreme poverty, disease, etc. It did eventually become the heart and soul of the community even though it was such a hardscrabble place. That’s where my grandmother was born.

The Irish built the Lachine Canal, Victoria Bridge, all the railroads. There were prime ministers and premiers, like [Brian] Mulroney or [Jean] Charest [whose mother is Irish]. And tons of artists. Émile Nelligan, Quebec’s most famous poet, was half Irish.”

Montreal’s best known ghost, Mary Gallagher — who was beheaded by her best friend in Griffintown — was Irish. Clearly, Irish history and Montreal’s ghosts are intertwined. How haunted is Montreal?

DK: “We have 150 ghost stories in this city that I’m aware of. You go to Toronto, they might have a dozen. Or Niagara-on-the-Lake claiming it’s the most haunted city in Canada? You have 15 stories there!”

Do you believe in ghosts?

DK: “I’m a ghost agnostic, to be honest. I’ve heard a million stories, I’ve researched them, I’ve had a few experiences that I’d classify as somewhat paranormal, but I’ve never actually seen a ghost with my own eyes. 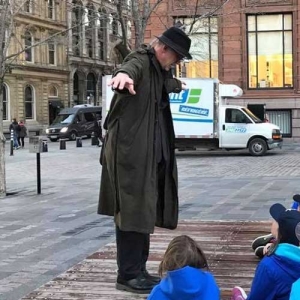 Tell us about the new company you’re co-founding, Secret Montreal, and the sorts of tours you’re planning.

DK: “Last year I did a red light ghost walk and it was very successful. We’re launching a new burlesque walking tour led by a real burlesque queen, Velma Candyass, this June.

The Quartier des Spectacles was the old red light district. Everyone is still talking about this district, but the city is trying to clean it up, erase it. Let’s keep the little bit that’s left and celebrate it, because it was a fascinating era.”

How did your time at Concordia influence what you do today?

DK: “Louise Chalmers, who taught me about acting and teaching when I was in high school — my career choices to this day — was also teaching at Concordia in the Drama in Education program. I was really fortunate to have somebody like that in my life. It’s amazing to think a teacher can have that sort of influence.

The program had three thrusts. One was drama teaching, the second was theatre activism — or drama for social change — and the third was drama therapy.

I’m heavily involved in theatre activism. I run the Infringement Festival, which is very much rooted in this tradition.”

Tell us about theatre activism.

DK: “I did a master’s degree at University of Calgary, where I really focused on theatre activism. I did a lot of work on stuff like ‘culture jamming,’ which is very is controversial. You’re disrupting societal norms with theatrical performances. Folks like the Yes Men, Michael Moore, the Raging Grannies — all that genre of performance. I love it!

The idea is that someone’s going to get up and protest but they’re not just going to walk down the street with a sign and yell. They’re actually going to integrate some sort of performance that might disrupt something else.”

You were banned for life from the St. Ambroise Montreal Fringe Festival. It started when you insisted a critic pay her way instead of getting a free ticket for your experimental show Car Stories  — and it snowballed into a large incident. In reaction, you started the Infringement Festival. How did that develop?

DK: “When we set up the Montreal Fringe in 1991, it was meant to empower artists. Unfortunately the Fringe was trademarked in 1998, meaning it’s very corporate now. We took their logo, crossed out the St. Ambroise [corporate sponsor] name and did a spray paint of ‘in’ and ‘ment’ [around ‘fringe’].

People can create their own performance anywhere they want, bring their own venue, but we also have venues that we share, so it all depends on the resources that exist. We often say, ‘Bring what you would hope to find.’

We got invited to the World Fringe Congress in Edinburgh, Scotland, in 2012. This is an academic forum. In 2014 I was invited back to give a workshop and I also did a performance at the Edinburgh Fringe.

Then in 2016 they moved the congress to another city. Where did they select? Montreal! So of course it’s now being run by the same people who kicked us out. In my hometown, I’m not even allowed in. They also excluded artists from the Buffalo Infringement Festival.

So we host a World Infringement Congress. Shona McCarthy [CEO of Edinburgh Fringe Festival Society] comes to ours, with her entourage of about 10 heads of fringe festivals. Even though we had been excluded from the congress this time, we did what any respectable fringe artist would do — create our own!

This all is what I learned at Concordia. I learned how to apply theatre and activism together.”

Are you able to apply activism to your tours?

DK: “The walking tours are able to put certain politics in the spotlight. In the Griffintown ghost walk, you learn that the building of the Lachine Canal saw the first strike in Canadian history because they cut their salaries by a third.

When they read the riot act and workers refused to disperse, the sergeant ordered his soldiers to fire into the crowd. And they did. So all these workers were shot in the back and died.

These kinds of messages are embedded in the stories and can speak to contemporary issues as well. Things like poverty, labour issues, feminist issues, queer issues. Here you’re looking at social history and oppression, and it’s all coming out through a ghost story.”