The Gina Cody School engineers a hot summer of activities 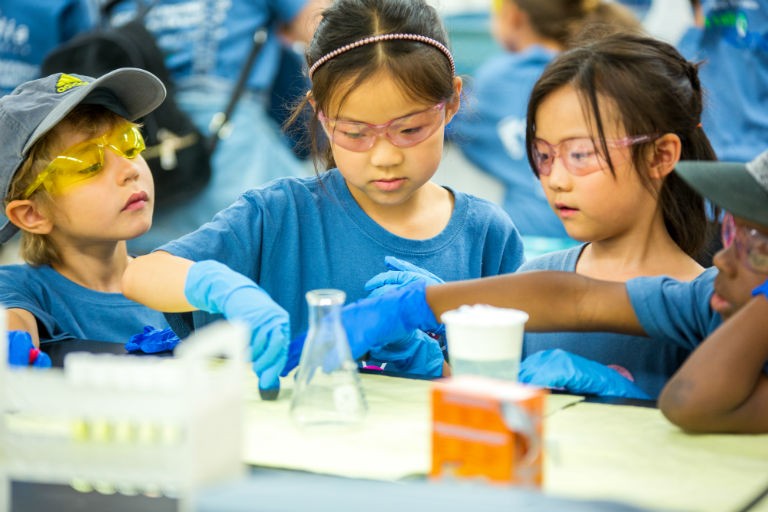 Far from enjoying a sleepy reprieve during a sizzling July and August, Concordia heated up this summer, playing host to myriad courses, programs, camps, conferences and more.

The Gina Cody School of Engineering and Computer Science did its part by organizing a number of camps and programs that exposed youngsters, teens and other participants to the wonders of science, technology, engineering and mathematics (STEM) enquiry — and to Concordia itself.

“We have been quite busy this summer with community outreach. The season is ideal for reaching out to young people and encouraging them to become engaged in STEM fields,” says Amir Asif, dean of the Gina Cody School.

The Concordia Institute of Aerospace Design and Innovation’s summer camp aroused curiosity in science and engineering for 40 youngsters a week for eight weeks. | Photos by Concordia University

From July 2 through August 23, the CIADI (Concordia Institute of Aerospace Design and Innovation) Science and Engineering Summer Camp offered education and fun to around 150 children aged 6 to 12.

Up to 40 campers per week conducted scientific experiments, saw demonstrations by students and researchers and visited university labs and science- and engineering-related institutions, among other activities.

2019 was the camp’s fourth year. From the start, it has partnered with Let’s Talk Science, an outreach program that also offers STEM learning experiences in schools and communities.

“Through exciting experiments designed to pique the interest of young minds, we work with and motivate children to take an interest in science and engineering,” says Nadia Bhuiyan, vice-provost of partnerships and experiential learning and professor in the Department of Mechanical, Industrial and Aerospace Engineering.

“Our experiments bring interactive, hands-on science to youth. The ultimate goal is to make STEM fields accessible and appealing to children.”

The Government of Canada and others have identified a need to increase the number of women in STEM, which remains disproportionately low.

Anjali Agarwal, associate dean of student academic services and equity, diversity and inclusion, and professor in the Department of Electrical and Computer Engineering, believes the root of the issue lies in the younger grades. “Gender neutrality in STEM education is lacking at the primary and high school levels,” she says. “It’s intense science and math, yes, but it’s the same regardless of gender.”

Motivated to change the landscape, Agarwal and her Gina Cody School colleagues developed the concept for GirlSET: All-Girls Summer Engineering and Technology Program, which launched in summer 2017. “We wanted to give schoolgirls hands-on engineering experience in a university atmosphere,” she says.

In its first year, 35 local and international youth — all female — attended the two-week program. This July, GirlSET welcomed 90 girls who are entering grades 9 to 11 and first-year CEGEP.

They enjoyed a range of informative and lively sessions on topics such as water, waste and energy, sumo bots and game development. “The girls get to see electric circuitry and bridge building, and this year they learned about Space Concordia and the Concordia Society of Automotive Engineers,” Agarwal says.

“We hire our undergraduate and graduate students to run the workshops, with support from faculty and laboratory staff. It’s a collaborative effort,” she adds.

The program’s growing popularity supports Agarwal’s belief that introducing young women to STEM fields will only increase their interest. “The girls really enjoy it.”

For the past several years, Montreal-area high school and CEGEP students have presented their award-winning projects at the Hydro-Québec Science Fair in the atrium of Concordia’s Engineering, Computer Science and Visual Arts Integrated Complex (EV Building).

The initiative was the brainchild of Ali Akgunduz, associate dean of academic programs and professor of mechanical, industrial and aerospace engineering.

“At the science fair we provide a lot of entrance awards to students, but they are still a few years away from university,” he says. “I thought, ‘Why don’t we bring these students now so they can see what engineers do, and let these kids learn about Concordia and see us as a research institute?’”

“I’ve been coding since I was 12 years old,” Varde says. “I want to do malware analysis, and cybersecurity is a good starting point to learn the ropes.”

Akgunduz says the goal is to have these bright-minded students choose to be engineers. “They all had an experience they will never forget.”

Engineering and computer science students often express an interest in acquiring entrepreneurial know-how. At the same time, John Molson School of Business (JMSB) students are increasingly on the lookout for insight into the field of cybersecurity.

Concordia’s solution? Create a one-day workshop to allow both groups of students to mix it up — cross faculties to gain knowledge.

He also covered developing technologies, such as blockchain, and new trends in cybersecurity, such as cyberinsurance.

“It was an overview of entrepreneurship, covering idea generation, creativity, opportunity recognition and marketing and finance,” Abraira says. “We kept it general because the goal is to get the students interested.”

At the end of the workshops, participants gathered to share insights on the day.

“The JMSB and engineering students had a chance to network with each other,” he says. “It was a good first start.”

The Gina Cody School also offered a series of summer programs and workshops to university students and professionals. These included:

Learn more about the Gina Cody School of Engineering and Computer Science and its summer programs.