Science before jazz:
The times they are a-changin' — climate change and uncertainty

Simon Michael Papalexiou, assistant professor at the University of Saskatchewan 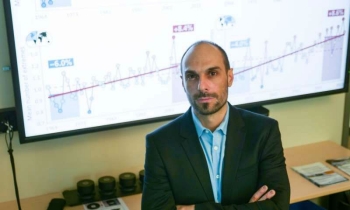 Global warming is the increase in the average global surface temperature, a fact emerging from scientific measurements that is generally undisputed. Most scientists already see the adverse effects of temperature increases on the climate, ecosystems and our communities. Many call for immediate action in reducing greenhouse emissions and warn that global warming impacts will become more damaging and costly.

Yet, despite the severe potential threats of climate change, it seems researchers do not communicate scientific results effectively to the public, resulting many times in indifference or even mistrust. A key factor could be the complex nature of these phenomena, but also a failure to communicate the related uncertainty.

This lecture will focus on global changes to hydroclimatic extremes, such as high-temperature extremes and extreme rain, as well as highlight the notion of uncertainty.

Simon Michael Papalexiou is an assistant professor at the University of Saskatchewan and member of the Global Institute of Water Security. He loves the randomness and uncertainty observed in nature and strives to understand its role in hydroclimatic processes.

His research evolves around the quest for a unified and precise theory for stochastic modeling, accurate diagnostics of climatic change and uncertainty quantification in hydroclimatic processes with emphasis on extreme events.

Papalexiou is an associate editor for Water Resources Research, and acted as a managing guest editor for Advances in Water Resources. His research has appeared in various news outlets, including as an editor’s choice in Science Magazine and a research spotlight in Eos. Papalexiou has also given interviews to prestigious news organizations such as Reuters.