Before Jean Chrétien, LLD 10, served as Canada’s 20th prime minister from 1993 to 2003, he had already gained a reputation as one of the country’s most passionate, colourful and outspoken public figures.

On March 4, in front of a packed Sir George Williams University Alumni Auditorium in Concordia’s Henry F. Hall Building, Chrétien proved his wisdom and wit are as sharp and biting as ever. The audience of 750 included Concordians as well as several Members of Parliament, candidates for the upcoming federal election, journalists and other guests.

Chrétien delivered the Henri P. Habib Distinguished Speakers’ Series on Peace, Conflict and Global Politics in the 21st Century lecture, called “Canada: Its own flag. Its own destiny.” It was followed by a Q&A with chief news anchor of CTV Montreal News Mutsumi Takahashi, BA 79, MBA 95, LLD 13.

Chrétien provided his take on a number of historic Canadian moments to an exuberant audience, which gave him four standing ovations. These were among his memorable quotes:

First elected as Liberal MP in 1963, Chrétien recounted his feelings when the Canadian flag was officially adopted in February 1965. “It was a great day on Parliament Hill. It was cold, but it was very warm in our hearts because we had our flag, at long last.” 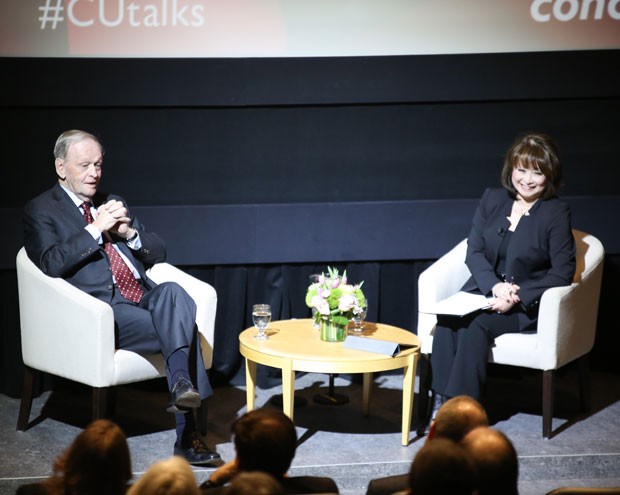 The event was organized by Concordia’s Advancement and Alumni Relations in collaboration with Department of Political Science. Bram Freedman, vice-president of Development and External Relations, and Secretary-General, served as master of ceremonies, and Marlene Sokolon, professor and chair of Department of Political Science, also addresses the audience.