Zach Sentementes says spending several punishing seasons aboard vessels gives him an edge in a highly competitive environment of advocacy and public affairs in the U.S. capital
|
By Joseph Leger
Source: Advancement and Alumni Relations

Zach Sentementes, BA 16, grew up on Littlejohn Island in Yarmouth, Me., with a peak population of about 100 in the summer and half that during the winter months.

The tiny island, located about 20 kilometres up the coast from Portland, Me., is connected to the mainland via a causeway, another island and a long bridge. 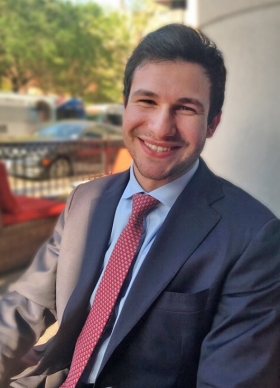 “I always felt like I was really far from the rest of the world after crossing onto our island,” says Sentementes. “But having that separation from the mainland and being outside in nature every day was so important to me growing up.”

Now a political consultant based in Washington, D.C., Sentementes spent his summers as a youth and during college working as a lobster and tuna fisherman in nearby Casco Bay. He credits the challenging physical labour for his strong work ethic and problem solving skills, which he believes has led to much of his professional success today.

“Working 12 to 14 hours a day offshore, sometimes without a break, is a gruelling experience,” he says. “But I learned the importance of working hard and developed an attitude of no excuses. I have a lot of respect for the fishing community after having been one of them.”

“Lobstering can be a dangerous job, especially in storms. You have to be in lock step with your crew or people get hurt,” he says. “It’s critical to build trust with people you sometimes barely know, and to communicate as clearly and precisely as you can to keep everyone safe and get the job done.”

It’s a skill that is proving invaluable in his current role.

“What I do now is wholly bipartisan and I work with people on both sides of the political aisle,” he says. “It’s obviously different than working with a crew on a ship, but the principles are the same. I am able to connect and communicate with people from across the United States regardless of ideologies, political experience and personal backgrounds.”

Sentementes developed an interest for international relations and politics at a young age, beginning when he attended international school in the Netherlands from the ages of three to six. Meeting other children from around the world kindled his curiosity and set him on his current path.

Another important influence was his father, who is involved in international trade, sourcing fabrics to China and Vietnam for companies such as Arc’teryx, Polartec and Primaloft. Family discussions frequently turned to politics and global events. Sentementes was regularly encouraged to participate, even as a child. 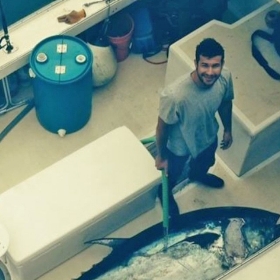 “I always had a voice at the table,” he says. “Even when my parents had guests over, I was always invited to participate in discussions. My mother helped me a lot with my communication skills. So early on, maybe to a fault, I became very confident in speaking with adults and I was never afraid of public speaking or voicing my thoughts.”

When it came time to apply to university, Sentementes knew he wanted to study in Montreal, and Concordia was his first choice.

“I visited Montreal a few times as a kid and in grade eight or nine I remember thinking I wanted to go to school there,” he says. “It’s one of those places that is entirely multicultural, more than any other place I’ve been. It’s what I love most about Montreal and Concordia.”

Moving from a tiny island to the big city was initially distracting. During his first year, he was too busy enjoying the city’s culture and nightlife to focus on his studies. That all changed in his second year when he took International Political Economy with Axel Huelsemeyer, associate professor in the Department of Political Science.

“It changed my life. It’s where all the different pieces of my life came together and led me to where I am now,” says Sentementes.

“He [Huelsemeyer] reminded me of the lobster fishermen I worked for. He had that same rigour and work ethic. Everything on time, no excuses. From that class I gained a mentor and the drive to ramp up my focus and kick my studies into high gear.”

Under Huelsemeyer’s guidance, Sentementes thrived academically. In addition to his studies, he worked as a teaching assistant and interned at the Concordia-based Montreal Institute for Genocide and Human Rights Studies.

After graduating from Concordia in 2016, Sentementes spent several months in China putting his minor in modern Chinese language and culture to practice. When he returned to the U.S. he wasted no time establishing himself in Washington, D.C.

He secured an internship with the Washington International Trade Association (WITA) — a non-profit organization that advocates for international trade and where he is currently the vice-president of its Young Trade Professionals program.

Within a year of moving to Washington, Sentementes was hired as an associate at the newly founded independent advocacy and public affairs firm, Advanced Advocacy.

Advanced Advocacy was founded by Andrew Kovalcin, former senior director of advocacy and external affairs at the United States Chamber of Commerce — the world’s largest business association. The firm represents a variety of major trade associations and Fortune 500 companies at the local, state, federal and international levels.

“We are a nonpartisan organization,” says Sentementes. “We work with a variety of groups on both the left and the right to ensure our clients’ objectives are heard by the right audiences at the right times.”

Kovalcin met Sentementes several times at events hosted by WITA and was so impressed that he recruited him to be his firm’s first employee.

While Sentementes admits that the current political climate in the U.S. is highly polarized, he believes it highlights the need for groups such as Advanced Advocacy.

“Business leaders and politicos are seeking assistance to navigate this landscape because it’s so unknown. We bring consumer groups, non-profits and think tanks together around common interests to take a balanced approach to policy and advocacy,” Sentementes says.

“It’s easy to get caught up in tribalism and what separates us. We’re all human beings with diverse backgrounds and beliefs and being able to focus on and promote what unifies us is very fulfilling.”