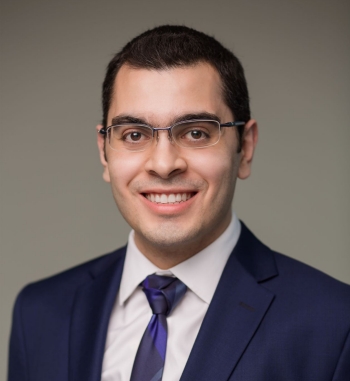 “It's been really nice to pass along what I've learned, to support others and see them succeed,” says Concordia donor Jad Saleh.

When Jad Saleh, BEng 12, arrived in Montreal from Lebanon in 2007 to study at Concordia, he was on his own for the first time in his life, struggled to find housing and was devastated by a death in the family. As a consequence, his studies suffered.

“My first month in Montreal, I had trouble finding and keeping an apartment of my own, and faced the prospects of homelessness,” he says.

With determination and support, Saleh bounced back. He found his place at Concordia as a leader of student associations, achieved academic distinction, and, by his last year, was awarded multiple scholarships.

Because he was already able to meet his basic needs at the time, he chose to pay it forward by creating a scholarship for future undergraduates.

“The idea popped into my mind to create my own scholarship in memory of my late uncle, who was a heart surgeon in Lebanon,” says Saleh. “If a person couldn't afford surgery, he would still do it because it was the right thing to do.”

He created the Jad Saleh Student Life Award, which, for every year since 2012, has helped support an undergraduate student at the Gina Cody School of Engineering and Computer Science. Open to international students and permanent residents, as well as Canadian citizens, it is focused on those with meaningful extracurricular activities, and who have supported other students within Concordia.

“It mirrors the experience that I had. In my first year, it was really difficult to even get a scholarship because many were not available to international students,” he says.

Following his degree in mechanical engineering at Concordia, work experience at CAE in Montreal and an MBA at INSEAD in Singapore, Saleh moved to Japan and became an entrepreneur.

Leading a startup is difficult under the best circumstances. Saleh faced another level of challenges in founding Japan’s first bike-sharing platform — called Pedaru — while also adapting to a new language, culture and business environment.

For two years, Pedaru offered affordable, environmentally-friendly transportation for students at several Tokyo universities. Eventually, Saleh found government regulations too onerous to expand beyond these campuses, and in 2019 closed the business.

“While it hurt in the short term, there were many long-term benefits and it wasn’t time wasted,” he says. “I learned a lot and I met many great people, including investors, venture capitalists and my own employees.”

Around this time, Saleh met with a fellow INSEAD alumnus working for Amazon. The company happened to be hiring for the launch of a new technology program to improve the customer experience in Japan.

“They wanted someone with an engineering background, an MBA and startup experience. It just fit everything I had done,” he says.

“I was both curious and a little bit afraid to go back to the corporate world.”

Since joining Amazon, Saleh has gone from working on this new project alone to managing a team of about 15 people. He says it feels like his own startup within one of the world’s largest companies.

“The difference is that I don't need to worry about finances and funding,” says Saleh, now senior manager of program management in Amazon’s customer service technology department.

Saleh says he owes much of this constructive attitude in the face of hardship to practicing Stoic philosophy, and keeps a blog on this tool that helps guide his life.

“One key part of stoicism is embracing failure,” he says.

“Being able to know what is under your control really helps. You only control your emotions, your actions, your thoughts, and that's about it.”

Ten years later, Saleh continues to fund his scholarship at Concordia while also offering motivational coaching and advice to anyone who asks.

“Providing financial support is great, but I don't think it's enough,” he says.

“It's been really nice to pass along what I've learned, to support others and see them succeed.”