An ambassador for the blind

Alumnus David Demers has overcome his recent onset of blindness and now supports others who are visually impaired
|
By Lucas Napier-Macdonald
Source: Advancement and Alumni Relations

Some people might feel clever for boarding the Metro so as to perfectly align with their eventual exits. David Demers, BA 14, can best them: he can pass through all his daily Metro stops without the use of his eyes. 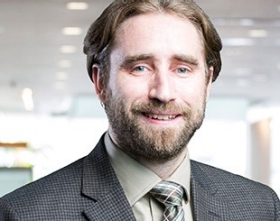 David Demers, who lost his sight before he turned 30, returned to Concordia to earn a BA in philosophy and community and public affairs.

In 2008, the alumnus’s vision was snatched by Leber hereditary optic neuropathy, a degenerative vision disorder. With the help of an orientation and mobility specialist, he had to memorize every dip and turn of his daily commute.

“It took me a whole summer to navigate just the two or three stations I needed to go to,” Demers says.

His sight declined rapidly. Like a candle in the wind, his left eye went blind. Doctors were unsure whether his second eye would follow. Then, one day two months later, Demers drove to work and, by 5 p.m., he couldn’t drive home.

He says that for the next two years, his perception continued to worsen.

Back up and at ’em

Not even 30 at the time, Demers took a year and a half to accept and adapt to his new state. As a businessman, photographer and aspiring restaurateur, he had a lot to lose along with his vision.

He eventually decided to return to school, enrolling in Concordia’s Department of Community and Public Affairs and the Department of Philosophy. With the help of his eSight glasses, electronic goggles that enable the legally blind to see, and Concordia’s Access Centre for Students with Disabilities, Demers graduated four years later at the top of his class.

“The centre was phenomenal,” Demers says. “Without them, I don’t think I would’ve succeeded.”

One semester, for instance, the then-student opened his new schedule and discovered he had a class at Loyola Campus, located about eight kilometres from the downtown Sir George Williams Campus, where all his previous classes had been.

“I was really stressed about it. I had never been there and I knew I would have new buses to take,” he recalls.

WATCH: Demers speaking at Concordia’s June 2015 convocation as the School of Community and Public Affairs’ valedictorian.

When he approached the Access Centre with his concerns, they fired off some emails and got the class transferred downtown.

Ambassador for the visually impaired

His Concordia degree in hand, Demers landed a job as a communications specialist with the Canadian National Institute for the Blind (CNIB). Although he has since left that position, working now as eSight’s business development and outreach manager, he remains a member of the CNIB’s board of directors and its resident ambassador.

He says that a lot of his work as ambassador is based on experiences from his own routine. If he receives a service, for example, and he finds it inaccessible, he’ll notify the company that provided it.

Two years ago, Demers worked with the STM to improve its accessibility, giving advice on how to delineate construction areas and facilitate blind passengers’ transitions from train platform to connecting bus line.

He also speaks at schools and organizations to raise awareness of the challenges of the blind. He also discourages audience members from grabbing blind people and hauling them into the Metro, even if they’re obviously trying to get on. He says people should always ask if they need help, first.

“One of the tips I give most often is when you meet a blind person, don’t forget to announce yourself,” says Demers. “That happens to me every day at the office. People come up to me and I have to ask who they are. It’s embarrassing.”