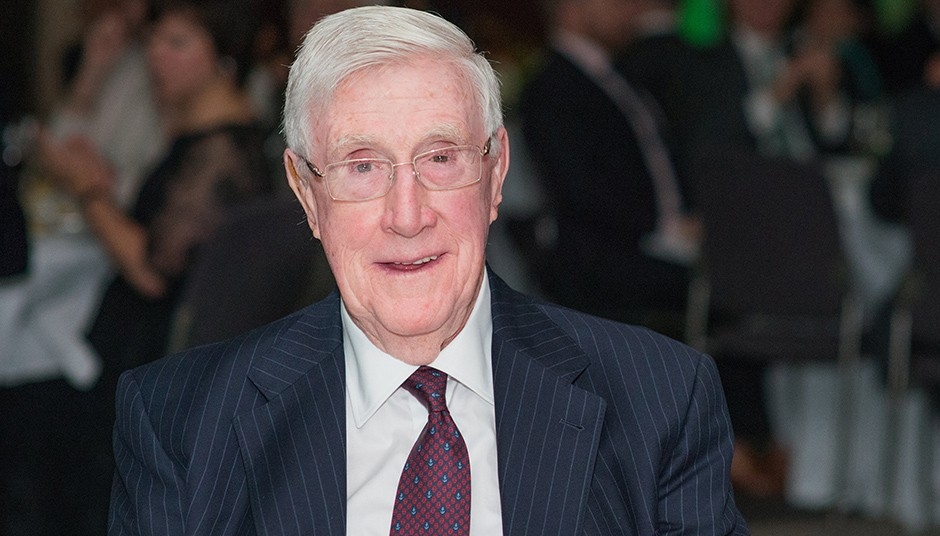 Prominent businessman, former Westmount mayor and one of Canada and Concordia’s most beloved Irishmen, Brian O’Neill Gallery, BA 57, LLD 10, passed away on January 23, 2021. He was 86.

A fifth-generation Irish-Quebecer, Gallery’s footprint was very much rooted in Montreal’s history: his great-grandfather, William Hingston, was a chief surgeon, bank president and mayor of Montreal from 1875 to 1877, and his grandfather, Donald Hingston, was a surgeon who founded St. Mary’s Hospital in 1924.

Throughout his own lifetime, Gallery made his mark on his city and country, including as the co-founder of the Canadian Irish Studies Foundation (CISF), which helped establish the School of Irish Studies at Concordia.

“Brian was an undeniable pillar of support for Irish Studies, and an irrepressible personality who marked the history of his alma mater,” said Concordia President Graham Carr. “We extend our deepest condolences to his wife, Nancy, and his family. We are truly grateful for his generosity to Concordia and for emulating the Jesuit ethos of service to society as a ‘man for others’.” 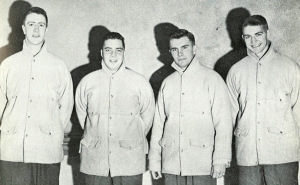 Gallery graduated from Loyola College — one of Concordia’s founding institutions — in 1957 and remained connected to his alma mater beyond his student years.

He served as president of the alumni association in 1971, organized the golden anniversary celebration of his class and helped raise funds for the Loyola Class of 1957 Bursary.

He headed Gallery Publications Limited, his family’s publishing business, beginning in 1959, becoming president and owner in 1967.

In the 1980s, Gallery served as Mayor of Westmount for four years. He was also acting chairman, vice-chairman and a director of Canadian National Railway, and the Quebec director of the Canadian Council of Christians and Jews — now the Canadian Centre for Diversity — from 1983 to 1985.

In 1995, Gallery co-founded the CISF in collaboration with Peter O’Brien and Michael Kenneally. A tireless fundraiser, he reached out to his impressive network of business and government contacts, friends and fellow Irish community members to drum up financial support for the project.

A natural bridge-builder, Gallery’s partnership — brokered between the CISF, Concordia and the Honorable Jean Charest’s then provincial government — launched the Johnson Chair in Quebec and Canadian Irish Studies in 2009, to conduct research, and to teach and promote the comprehensive story of the Irish in Quebec and across Canada.

“The development of Irish Studies at Concordia simply would not have been possible without the success Brian Gallery inspired and encouraged,” said Michael Kenneally, principal of the School of Irish Studies. “He united Irish community members and others — many of them alumni — to rally behind the dream of giving a permanent academic presence to this discipline at the university. Brian’s commitment to this goal was complete and he operated in full confidence that it would be achieved.

“He helped to create a permanent legacy that will benefit Concordia into the future. Our mission at the School of Irish Studies is to honour him by continuing to build on his extraordinary achievement.”

A prized member of the community

In recognition of his accomplishments, Gallery received numerous distinctions from Canada’s Irish community, such as the 1997 St. Patrick’s Society of Montreal Community Award.

In 2000, he was elected Montreal Irish Man of the Year and eight years later, Gallery was named an Honorary Lifetime Member of the St. Patrick’s Society.

For his widespread contributions to the country, Gallery was honoured with the Commemorative Medal for the 125th Anniversary of Confederation.

He received the Queen Elizabeth Commemorative Medals for her Golden and Diamond Jubilees. In 2018, the Governor General of Canada awarded Gallery with the Meritorious Service Medal.

The Concordia University Alumni Association awarded Gallery the prestigious Humberto Santos Award of Merit in 2010, for his role in developing the School of Irish Studies.

Later that year, the university also presented Gallery with an honorary doctorate in appreciation of his outstanding contributions and long-time dedication. 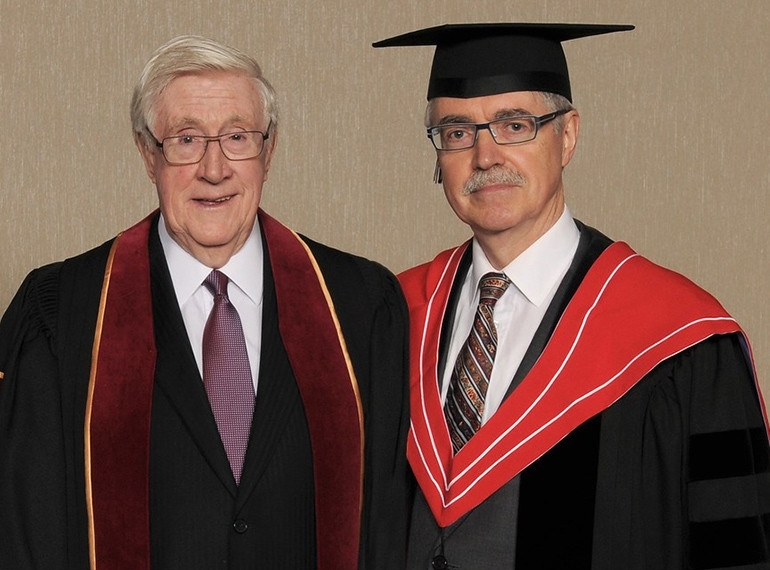 In honour of his outstanding contributions, Brian Gallery (left), pictured with Michael Kenneally, principal of the School of Irish Studies, was presented with an honorary degree from Concordia in 2010.

In 2014, Gallery was presented with a Certificate of Irish Heritage by Ray Bassett, then ambassador of Ireland to Canada, for his role in “making Canadian Irish Studies at Concordia one of the pre-eminent academic centres in the world for the study of Ireland and the Irish Diaspora.”

Gallery received another distinction from his alma mater in 2014. He became one of 40 people named a Great Concordian as part of the university’s 40th anniversary.

When he retired from the CISF, a gala in Gallery’s honour was organized, where his peers and community established the Brian O’Neill Gallery Scholarship Fund, which annually funds tuition for 25 students in Irish Studies.

Thanks to Gallery’s commitment to higher education, many annual Irish Studies courses, community outreach events and the Irish Public Lecture Series will remain his legacy at Concordia.

“Our community was inspired by Brian Gallery — he was an advocate of higher education and a great friend to Concordia,” said Paul Chesser, BA 94, GrDip 97, vice-president of Advancement. “He was a towering figure in the Irish community across Canada and a driving force behind the success of our School of Irish Studies that will educate generations of students thanks to Brian’s commitment to the cause.”

Gallery is survived by his wife Nancy MacNaughton, their three daughters, Ann, Mary and Elizabeth, and seven grandchildren.