To elaborate on your recent article on Irish Studies at Concordia we wish to draw attention to the enormous contribution of Brian O’Neill Gallery, BA 57, LLD 10, in developing this area of study over 15 years, which eventually led to the creation of the School of Irish Studies in 2009. 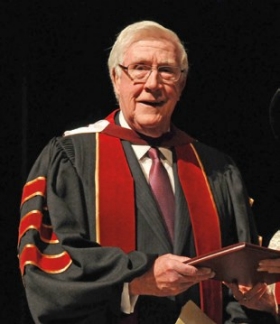 Brian O’Neill Gallery was awarded an honorary doctorate in November 2010.

Partnering with Peter O’Brien and Michael Kenneally, Gallery created the Canadian Irish Studies Foundation (CISF) in 1996, and by calling on his very extensive network of friends, business and government contacts, and Irish community members (including many of his fellow alumni of Loyola College — one of Concordia’s founding institutions), Gallery enthusiastically sought financial support for this project. While an increasing number of courses, programs, public lectures, academic structures and community-outreach events were being consolidated within Concordia, Gallery’s ability to inspire donors and work with a succession of university administrators ensured the steady growth of this area of study.

Particularly notable was the partnership Gallery created between the CISF, Concordia and the Government of Quebec under the leadership of then Premier Jean Charest, which led to the creation of the Johnson Chair in Quebec and Canadian Irish Studies, with a mandate to conduct research, teach and publicize the multi-faceted story of the Irish in Quebec and elsewhere in Canada. As a fifth-generation Irish-Quebecer himself, with several illustrious ancestors who shaped the history of Montreal and indeed Concordia itself through its Loyola roots, Gallery was passionately dedicated to highlighting this history so that Quebecers could learn about and connect with this very important part of their heritage.

With the School of Irish Studies now firmly established, Gallery can take pride in his exceptional achievements. Indeed, he has received several Irish-community awards to recognize his accomplishments. The Concordia University Alumni Association awarded him the prestigious Humberto Santos Award of Merit in 2010 and that same year the university itself conferred him with an honorary degree. Upon his retirement from the Canadian Irish Studies Foundation, a special evening was organized at which various dignitaries from Concordia and from the wider business, political and cultural community acknowledged the fulfillment of his dream.

To give permanent recognition to Gallery, the Canadian Irish Studies Foundation established the Brian O’Neill Gallery Scholarship Fund which annually awards free tuition to about 25 students in Irish Studies and has disbursed more than $300,000 since its inception. Perhaps the most enduring part of Gallery’s legacy is the knowledge that the numerous annual courses in Irish Studies, the Irish Public Lecture Series and ongoing community-outreach events will ensure that his achievement will continue, on a permanent basis, to shape the lives of countless individuals.

To mark the 10th anniversary of the formal creation of the School of Irish Studies, Concordia’s University Advancement has partnered with the Canadian Irish Studies Foundation to prepare a 24-page booklet outlining the achievements of Irish Studies since inception.

If you would like to receive a copy of this booklet, please contact the School at irishstudies@concordia.ca.