The department chair and member of the university’s Board of Governors wins the prestigious Mary E. Elliott Award for his work
|
By Elisabeth Faure 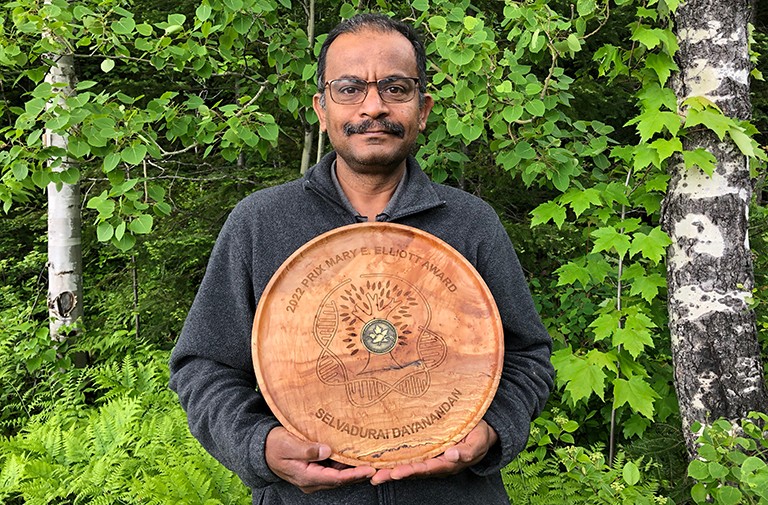 Selvadurai Dayanandan: “I am honoured and humbled to receive this recognition.” | Photo: Arun Dayanandan

Members of Concordia’s Department of Biology in the Faculty of Arts and Science have reason to take pride.

Selvadurai Dayanandan, professor and chair of the department, has won the 2022 Mary E. Elliott Award, the highest recognition for meritorious service to the Canadian Botanical Association (CBA).

“I am honoured and humbled to receive this recognition and put Concordia at the forefront of the CBA,” says Dayanandan.

The association introduced the award in 1978 in memory of Mary E. Elliott, who was a victim of homicide in September 1976. She had just completed four consecutive years of service on the CBA’s board of directors — as secretary, vice president and president — and was just beginning her term as past president at the time of her death.

The award highlights Dayanandan’s long commitment to the CBA as webmaster, board member and vice-president. He also organized the CBA annual meeting at Concordia in 2006, which was opened by Graham Carr, now Concordia president and at the time associate dean of the Faculty of Arts and Sciences.

“This is in honour of Dr. Dayanandan’s work, and his service,” says Nicole Fenton, the CBA’s president.

The prestigious accolade is one of Dayanandan’s many recent accomplishments. His latest work with international collaborators on the evolution tallest trees in Asia was featured in two leading international journals, Nature and Science.

The CBA is a family affair for Dayanandan. His two sons have both joined the association as well: Concordia grad Arun (BSc 17, MSc 22) will soon pursue his PhD in restoration ecology at Yale University, and Niraj is Concordia undergrad working on green roofs and urban biodiversity under the mentorship of Carly Ziter, associate professor of biology.

“They are contributing to the rejuvenation of the CBA and will help make the Concordia name resonate at the CBA for years to come,” says the elder Dayanandan.

Learn more about the Department of Biology.