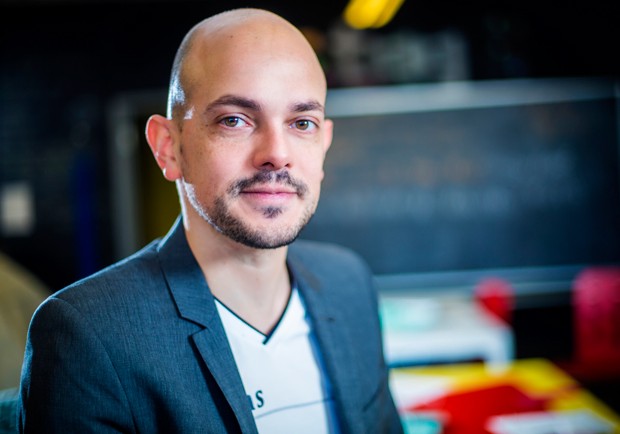 The whole is greater than the sum of its parts. In our connected world, this holds true for human knowledge as well.

Fabio Balli understood this early on in his career. The Swiss MA student — whose eclectic journey led him from hospitality to entrepreneurship to business consultancy — has now decided to tackle an issue that affects us all: the right to breathe freely.

Calling on our collective intelligence, Balli is encouraging us to create and share free accessible content to fight respiratory diseases and foster healthy breathing.

Do you know your commons?

A multidisciplinary researcher, Balli has become acquainted with various fields of study over the course of his professional and academic careers, including human resources, game design and education technology.

For his MA project in Concordia’s Individualized Program (INDI), Balli chose to look into the question of health commons, with a more specific focus on respiratory health issues.

“Millions of people die each year from chronic respiratory diseases,” says Balli. “What if we could combine the knowledge and expertise of patients, yoga practitioners, designers, health professionals and other citizens, to work together to reduce these numbers?”

The commons, a term that dates back to the sixth century but was recently put back into perspective by Nobel Prize winner Elinor Ostrom, can be defined as collective resources. The air we breathe and the water we consume can all be considered commons; other examples include open-access content such as what’s found on Wikipedia.

Balli and his team are building respiratory games and devices (available through the Breathing Games initiative) that will benefit communities by providing useful training and educational tools.

Through projects like this, he plans to study the future evolution of the commons. The games are just an example of the many products that could be collectively created within the scope of non-proprietary health resources.

Balli was in Europe when he stumbled on Concordia’s INDI program. He considers himself an independent researcher, which is one of the reasons the program was so enticing. “It lets you be autonomous and proactive in your learning and experimentation — though you do have to stay very organized.”

Because it encompasses such a diversity of disciplines, Balli’s research project is supervised by not one but four faculty members: Marguerite (Margie) Mendell, professor in the School of Community and Public Affairs and director of the Karl Polanyi Institute of Political Economy; Philippe Caignon, chair of the Département d’études françaises and academic director of the Centre for Teaching and Learning; Warren Linds, associate professor in the Department of Applied Human Sciences; and Satoshi Ikeda, associate professor in the Department of Sociology and Anthropology and former Canada Research Chair in Political Sociology of Global Futures.

“Complex challenges require that we call upon a large network of expertise,” says Mendell. “Tending towards transdisciplinary research agendas might be the solution to some of the difficult problems we are facing today.”

It can also be fun. Through Breathing Games, Balli has organized “health game jams,” in which participants from various fields get together to collectively create digital games and devices focused on health education.

With Breathing Games, Balli hopes to create “hardware to enable anyone anywhere to self-assess their lung capacity, data systems to inform health policy and research, as well as a methodology to help different stakeholders build on their collective intelligence.”

It’s an ambitious order that also comes with enormous potential for growth and international acknowledgement.

Keynotes for a common cause

This year, Balli is also organizing a series of keynote speeches to explore the commons from different perspectives, including the prospects of a free digital society, innovation in the public domain and the knowledge economy.

Among the speakers are Concordia honorary doctorate recipient Richard Stallman, president of the Free Software Foundation, which helps distribute the GNU/Linux system; Didier Pittet, hospital epidemiologist and director of the Infection Control Programme and the World Health Organization (WHO) Collaborating Centre on Patient Safety in Geneva; and Madeleine Laugeri, founder of the School of Emerging Change in Switzerland.

Balli hopes their talks will help to illustrate the ways in which knowledge can be shared outside a proprietary model, and promote discussions around them.

“We don’t need much convincing about the limitations in thinking that everything can be managed and operated either by the public or the private sectors,” explains Mendell. “In the digital sphere, for instance, where private actors are fighting to gain ownership over open spaces, open-source movements are ways to oppose this and to bring knowledge back into the collective.”

For his part, Balli insists that innovation should first be devoted to serving a collective goal, and then be concerned about whether or not it has commercial value or is financially viable.

“This is quite the opposite of what we are witnessing today. In the past, researchers were not as tied to institutions as they are today.  As a result, their research often ended up being more creative, free and alive.”

The keynotes speeches, entitled “Innovate to save lives,” have been awarded the School of Graduate Studies’ Graduate Community Building Fund, the Sustainability Action Fund, and the Concordia Council of Student Life Special Project Fund. They will take place at Concordia between April and September 2017.

Getting your hands dirty

A member of the Milieux Institute and the Technoculture, Art and Games (TAG) research centre, Balli is currently looking for passionate contributors for the game jam. He’s also still waiting for the commons to take flight and become a self-governing entity.

The past three years have been challenging, he admits — so far, he has been leading the initiative mostly by himself.

“My dream is to see teams sprout in different parts of the world and provide their own contribution to the commons,” he says.

“I’m eager to see how they will take ownership and adapt it to their own vision. I’m trying to show people what we are doing and how we are doing it in order to inspire them.  Afterwards, they are free to come up with whatever they like.”

Participate in the next Health Game Jam at Concordia on February 18 and 19.