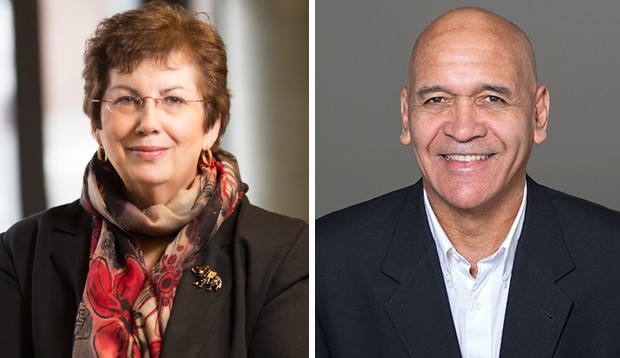 Leading up to the annual Long Service and Retiree Luncheon, we are profiling some of this year’s honourees to both celebrate their important achievements and acknowledge their service, loyalty and dedication to the university community.

Director of Clinical Services and Public Outreach,
Centre for the Arts in Human Development
20 years at Concordia

Montreal social worker Lenore Vosberg’s Concordia story starts in 1994, when she wanted to raise some money to provide music lessons for a client. Sadly, the agency where she worked could not oblige.

“So, I had this idea that we could put on a play and sell tickets to raise funds,” says Vosberg, who had no drama experience at the time. “That led me to the university’s Department of Theatre.”

There, she met drama therapist Stephen Snow, now a professor, formerly chair, in the Department of Creative Art Therapies. Together with composer and music therapist Shelley Snow, they put on a musical version of Aladdin in the D.B. Clarke Theatre.

The production starred participants from Montreal’s social service programs — often people with adaptive challenges and intellectual or physical disabilities. The show raised $14,000, which Vosberg used to start the Quality of Life Fund, run through the West Montreal Readaptation Centre (WMRC).

It marked the beginning of Vosberg and Snow’s enduring creative arts therapy collaboration.

“Fast forward 20 years and we’re still working together,” says Vosberg. “In June we raised $23,000 at our 20th anniversary production, A Night at the Oscar.”

After their initial success using drama therapy to support people with intellectual and developmental disabilities, they led the charge with Miranda D’Amico from the Department of Education in co-founding Concordia’s Centre for the Arts in Human Development (CAHD).

Over the years, the CAHD blossomed into a Concordia-based research unit as well as an educational and clinical centre dedicated to promoting personal growth for people with intellectual and developmental disabilities.

The centre has ongoing partnerships with the Department of Creative Arts Therapies and the Department of Education. It integrates therapeutic programs in creative arts therapies with student education and training, research and public awareness initiatives.

“I love having this outlet to put my ideas into action. There's satisfaction working with a team of professionals who are really skilled, talented and dedicated, like Miranda D’Amico, the centre’s co-director of research.”

Vosberg says she feels most gratified by the positive impact of their programs on participants’ lives. “We see them become more verbal, more self-confident, more social. Their self-image improves. It’s genuinely moving.”

Presently, Vosberg works two days a week as a social worker at the WMRC, where she still manages the Quality of Life Fund.

The rest of the time, you can find her at Concordia, performing her duties as CAHD’s clinical coordinator, driving force and proud promoter.

Christopher A. Ross has been pivoting between research in marketing  and university administration for 35 years — deriving great satisfaction along the way.

“I love what I do,” says the John Molson School of Business (JMSB) marketing professor.

Formerly associate dean, then dean of the Faculty of Commerce and Administration (1990-95) — which became JMSB — Ross has worn many hats at Concordia.

He was also chair of the Marketing Department (2012-15) and director of the joint PhD in Business Administration program (1985-88). “That was a very enjoyable post because I got to interact with all of the business professors in the city,” says Ross of the latter.

During his tenure as dean, Ross oversaw three developments he’s particularly proud of.

“We established an institute with faculty volunteers teaching free courses for participants, including the Cree community,” he recalls. Since its founding in 1993, the institute’s name and mandate has changed twice, finally becoming the Institute for Community Entrepreneurship and Development in 2007.

Another cause for celebration at that time was the creation of the now-defunct MBA in Aviation. It came about through an international competition held by International Air Transport Association.

The program had more than 100 graduates, including senior airline executives from all over the world. It ran for almost 10 years and it lives on today via the Aviation Management Programs offered through the John Molson Executive Centre.

Also during Ross’ time as dean, the faculty received its first $1M grant.

It’s easy to see why this initiative was so dear to Ross, who hails from Trinidad. Most of his research revolves around marketing’s impact on developing countries — especially the Caribbean —,  on minority entrepreneurship and  not-for-profits.

In addition to his duties at Concordia, Ross has served as director of the Executive Development program at the University of the West Indies (Mona, Jamaica) and external examiner for its EMBA (Jamaica) and MSc (Trinidad) programs.

Currently he is the external examiner for both the BBA and MBA programs at the University of Technology, Jamaica.

‘I'm most proud when I can identify that I've helped people’

"I've always felt that part of my role as a professor is to help people who need a leg up. All of my research has been focused on developing countries and minority communities,” Ross says.

“About 10 years ago, I felt there was a lack of local business teaching tools, so I switched my focus to writing business cases.”

Ross is the author of more than 35 such business cases, which have appeared in numerous casebooks, proceedings and university catalogues, including those of IVEY and Harvard business schools.

“When they send an email or run into you on the street and you realize you’ve played some part in their success — it’s a great feeling.”

Ross, however, is equally involved with faculty issues. A former Concordia University Faculty Association vice-president and president, he’s currently serving as a grievance officer. “I'm most proud of the things where I can identify that I've helped people,” he says.

Moving forward, Ross will continue to teach and give his two-day workshop on how to write business cases. Check the JMSB website for upcoming dates and locations.

Read about more Concordians celebrated at this year’s Long Service and Retiree Luncheon.