A conversation with William BUKOWSKI and Cindy FINN 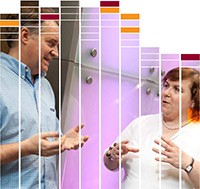 Concordia psychology professor and director of the Centre for Research in Human Development, William Bukowski has dedicated more than 30 years to teasing out the complexities of how we organize ourselves into groups as kids.

How we play and learn together in class. How we form alliances at camp and at the rink … or just hanging out in the neighbourhood.

And, in a few cases, how we also exclude and marginalize each other.

In other words, Bukowski’s seminal work describes the very foundations of what makes a human a social animal.

Beyond the Headlines: Friends having lasting influence.mp3
Download the podcast (54.4 MB)

Bullies get all the attention

“There is an imbalance of attention on negative classroom behaviours, such as aggression and exclusion … a kind of popular hysteria about victimization that causes us to overlook the positive attributes of friendship,” laments Bukowski.

His work provides much needed balance. It focuses not just on the negatives of being friendless but also on the lifelong benefits of having a rich social network.

Bukowski’s research among school-age children in Colombia and Argentina yielded some provocative insights, including how our global consumer society unites privileged kids. This may contradict the seminal social anthropologist Clifford Geertz … but Karl Marx would have understood that class trumps ethnicity.

What friends are for

Over the course of his career, professor Bukowski has attracted significant funds from leading grant agencies, including the Social Sciences and Humanities Research Council of Canada and the Fonds québécois de la recherche sur la société et la culture.

Among his key findings: kids with friends do better at school and have more successful lives later on than kids who don’t connect with their peers.

Friends help us feel good about ourselves and our place in the world. But they also do more. Making and keeping friends teaches us how to get along, resolve issues and communicate within groups — invaluable lessons for later in life.

The reverse is also true, says Bukowski. Difficulty making friends, or social exclusion for a variety of reasons, correlates with poor academic and job performance, later mental illness and other negative outcomes.

In a wide-ranging conversation at Concordia, William Bukowski and psychologist and school board administrator Cindy Finn explored peer relations between kids, and how success or lack of success in these foundational friendships can set lifelong patterns in school, at work and in life.

For Bukowski, the conversation, excerpts of which appear below, was an opportunity to reflect on decades of research with an informed and passionate colleague.

Does professor Bukowski’s groundbreaking research translate into best practices in the classroom?

Cindy Finn is unequivocal: “One of the things we value at the school board is that we have partners in university … We’re very much consumers of research … and one of the nice things between our school board and Concordia is that whenever we’re engaged in collaborative projects, there’s always an opportunity for the researcher to come back and explain the results in a simple way with concrete strategies to implement in the classroom.”

The politics of popularity

According to Bukowski, being popular and being liked is not the same thing. “They’re related to each other,” he says, “but they’re not by any stretch of the imagination the same.”

Friends are good for you

BUKOWSKI: Studies show that children who have trouble interacting with peers are most likely to show negative outcomes when they’re adults. Whether it’s ending up in prison, having a psychiatric diagnosis, being kicked out of the army or being unemployed. Certainly, criminality is related with functions in childhood.

The opposite is also true, says Bukowski. Multiple friendships seem to “inoculate” against negative outcomes such as bullying, exclusion and other kinds of aggression. In other words, kids with friends are less likely to be victimized by the class bully.

How does this buffering mechanism work? We don’t really know, admits Bukowski. But he is working on shedding light on the issue.

An exchange on aggression

FINN: Earlier, professor Bukowski talked about the difference between the likeability factor and the power factor, and that’s one of the things that’s tough for teachers to sort out because sometimes, children who are aggressive or bullies have a lot of power.

BUKOWSKI: The correlation between popularity and aggression is higher than you might think … There are some people who are aggressive and they elicit from others victimization. Those kids, as Finn was saying, often end up being poorly liked and even rejected. But other kids can be aggressive and establish some status in the group. These children end up being very well liked. So the sort of people who can gauge aggression in successful ways end up acquiring some power for themselves and that can really set up a difficult dynamic for the teacher.

Friendships are more important for kids that are less privileged … or are they?

Bukowski’s earlier assumptions did not stand up to the evidence. In fact, he was frankly surprised by the links he discovered between a child’s socioeconomic status and a child’s success in peer relationships.

FINN: Over the last several decades we’ve learned … that academic achievement is one aspect of competence, as professor Bukowski talked about. But certainly, the whole idea of socialization is an important tool and instrument for helping with school achievement.

BUKOWSKI: I don’t know who used the sentence originally but it used to be three Rs: reading, writing and arithmetic. Now it’s the fourth R — relationships … Finn said it so well. With teachers, it’s a management game as well as a task of imparting information.

FINN: I’ve seen tremendous moves forward … on what we used to call the hidden curriculum, the last bit of social and emotional learning. We’re making it much more explicit to say, it’s okay to disagree with your peers but you need to have the right words.

BUKOWSKI: What makes a teacher good is that they know that that fourth R is critical. And I think [it] is critical not only in terms of promoting a sense of well-being and belonging in the classroom but also as a way to foster cognitive development.

A native of Buffalo, N.Y., William Bukowski obtained his PhD in Developmental Psychology with a minor in Clinical Psychology from Michigan State University. He has led international studies, co-authored dozens of academic articles and book chapters, and received external research grants.

An early stint with the Jesuit Volunteer Corps, for whom he taught grade school math on the St. Labre Indian School in Montana, continues to inform his work with social and academic sensitivity.

The Jesuit connection came full circle when Bukowski arrived in 1989 at Concordia’s Loyola Campus, which was also founded by Jesuits. In 1999, he was named the founding principal of Loyola International College, a position he held until 2004.

Cindy Finn is director of student services at Lester B. Pearson School Board, the largest English school board in Quebec. Prior to that, she worked as a school psychologist supporting students with special needs. She has a PhD in Educational Psychology from McGill and has practised in Canada and the United States. Finn has published research, presented at academic conferences and lectured at Concordia and McGill. Her research focuses on home-school collaboration for children with special needs, emotional-behavioural disorders, and inclusive educational practices.

Multiple friendships seem to “inoculate” against negative outcomes such as bullying, exclusion and other kinds of aggression.